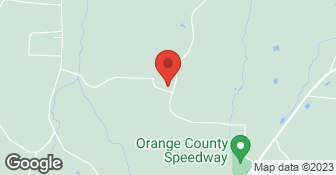 Their workmanship was so perfect. So nice and professional. They had a big group of 6 people who knew what they were doing. They were polite, cleaned up any mess and added new insulation. All the windows were faced and looked beautiful. They even provided a half moon window at no additional cost that was installed. Overall, I would highly recommend them.

Description of Work
They installed a new front porch, sided the whole side of the house, installed

Thank you for the business! We enjoyed working with you.
5.0

The owners gave us an estimate and we accepted it. They came out and started Monday and by Thursday they were finished. They came back out on Friday to inspect and make sure all was cleaned up. The workers did a great job and was friendly. WE Recommend.

Thank you for your business and we are glad to become friends with you all!
1.0

Description of Work
Gave written estimate in early summer 2013. Advised probably wouldn't be able to start until Sept. After not hearing from him in September we started calling and were put off three weeks or so each time we called, for several phone calls. Excuses were weather, too busy. Finally they stopped returning our calls in approx. November time frame. We waited the three months and then never got a start time scheduled

Sorry we couldn't get to your work in a timely manner. This is very unlike us!
2.0

We added a room 16x20 to make an extra room for my mother to live in giving her her own area to live. It looked well done and gave her a nice place to live. After her death we cleaned out the room and found a leak, we called paul and he came over and looked at it said it was a leak on the roof where the roof was not nailed down good and he renailed it . At that time we concidered it fixed,we then added a screen porch and cemented area to the back of the house,and Paul mand his son did it, we are now remodeling and the area of the room where the leak was is all rotted out, we called paul to come and look at it and he said it all lhad to be taked apart and redone because of the water damage, he stated he was on a job that had to be done and then he would be over in about three weeks this was before thanksgiving , I have called him at least 4 or 5 times and he either does not answer the phone or he will say he is not sure when he can get to it , his workers are out of town or some excuse, due to the damage we have started to do the work our selves, when it was getting cold we actually had a snake trying to get into our house, when I called paul then he was over in a couple of hours to nail a piece of wood over the hole so the snake would not get in, that was in november, it is now january and the water is still dripping in the house, he did not connect the roof correctly to the house and it is dripping down into the house, we have had to change the floor, insulation walboarding, and siding ,roofing, caulking and gutters and we hope to have it fixed, I just don't think it is right that 1. the job was not done right in the first place and 2. If he did not want to fix it he should have said so and 3 to at least do it in a timely manor.

Description of Work
Added a room to home.

This room was added by our company. There was a problem with the new roof where it meet the existing roof. The owner found an issue with the roof and floor when they decided to replace the flooring throughout their home. They had no knowledge of a problem until they starting moving furniture. After removing the carpet themselves they found a leak from the roof which came down the wall and into the floor. They never saw an issue due to furniture and clothing sitting around. Once problem was found they called us, we went and fixed the roof, wall, and floor at NO cost. Homeowners seemed very happy about the fix. Also, the issue was found approximately 10 years after room was added on and we still fixed it for them at NO cost to them. The fix was done in a timely manner so they could continue with the floor install.

No, C&P Siding / PAC Contractors LLC does not offer warranties.