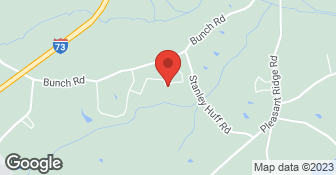 Excellent service and very reasonable price, will use for more projects in near future

Went quickly and easily. Made the suggestion that the dimmer switch in this case might be why bulbs burnt out so quickly, replaced.

Description of Work
Needed a ceiling fan whose light has died to be taken out and replaced with simple ceiling light.

Marty called me back within 15 minutes and was at my house within 30. He was very friendly and explained what was going on. I was very happy when he fixed it and it was a simple fix. I thought the price was fair. I would call him again.

It was excellent. It was a very good service. They came, fixed it and left. Price was good.

Description of Work
I had them fix a fan.

Excllent! Joe is a good communicator, he is responsive and accountable and professional. Highly recommended!

Description of Work
Dampness in master bath and crawlspace

Marty showed up when he said he would and gave a quote on what the job would cost. When he got going on the job he realized some wires had to be changed and some of the boxes had to be updated. He was very up front about the increase of the job and took time to explain as to why. Marty also made recommendations to make things look better in each room. Marty also stated we needed a different switch for one fan as well as a down rod. Marty didn't try to sell us one off his truck like some people would for a high cost but instead let me get my own. I will definitely be calling Marty again.

My knowledge about electrical work is very minimal. My main concern about hiring an electrician was being overcharged or charged for something that didn't actually need to be done. During my first phone call with Marty he suggested a couple of things for me to try before he came out which was a great sign to me - he was helpful and honest. Marty spent a few days working on various electrical projects at our house with the main project being the fuse panel replacement and system upgrade. He was incredibly thorough throughout and respectful of our home. He even took the time to schedule an inspection once he was finished with the panel to ensure he had done the work correctly, something I hadn't thought of and something he didn't have to do. I honestly have no complaints about the work we had done or the way it was done. I am thrilled to have found a local electrician to call for all of my electrical needs. Many of the other larger electrical companies I called were much more expensive and seemed to be offering me services that I didn't actually need such as a "panel maintenance service."

Description of Work
We had 2 nonworking light fixtures, an outdoor fixture that needed to be replaced, and we had our fuse panel replaced and system upgrade (our house is 60 years old, built in 1957).

Mr. Hedgecock quickly identified the problem and then repaired it. He had our power restored in less than 30 minutes.

Description of Work
Mr. Hedgecock had to troubleshoot a power outage that was affecting only half of our house.

The work involved cutting out a section of brick on the exterior of the house. The process was explained clearly beforehand and the work was completed promptly. The work area was swept up and left clean afterwards. Mr. Hedgecock was very professional and left me feeling confident in my selection. These days finding someone who is qualified AND will show up is becoming more challenging. I would hire him again.

Description of Work
Added an outside electrical receptacle.

Excellent. Responsive to all communications and right from the get go - as he was providing the estimate - it was very clear that he is a professional who is very skilled at his trade. Final cost was exactly as quoted. Very satisfied with the results and would not hesitate to use him again in the future. Thanks, Marty!

It worked out great! He was polite and professional. He also knew what he was doing.

Description of Work
They fixed wiring that came loose from receptacle.

He was wonderful! He was very helpful.

Description of Work
Put all new recessed lighting in my kitchen and new chandelier in my dining room and hallway, and new lighting in two bathrooms.

Called to get an estimate for wiring an outbuilding. Called me back and said he'd try and get there that afternoon. Called later and said he couldn't make it, but he'd "try" again the next day. Next day came, he didn't come by and never called. Never heard back from him. I saw some reviews that said he'd done the same thing to them, but I wanted to give him the benefit of the doubt. I guess I was wrong. If you think the job isn't worth it, or it's too far away, etc., that's fine, just say so; but to say you're going to do something and then not do it can only damage your company's reputation.

He was so easy to work with. Detailed and determined and price was very reasonable. Would def recommend him.

Description of Work
we had some lights and outlets out…..He investigated and worked on it until he figured out the problem.

Called 2 weeks after my inquiry ten said would call the next week to set a time. Never called back.

Description of Work
Never called back to schedule service.

Marty was GREAT! He was flexible, attentive to all details and completed the job in a timely manner. Additionally, he worked with the city to facilitate other services. A true professional who I would not hesitate to use again. If you need electrical work this is the

Description of Work
Upgrade service to 200amps and rewiring within home.

It went very well. He showed up on time, got the job done, and was professional. I will say though that it was a little hard to get a hold of him in the beginning.

Description of Work
Installed new inside circuit breaker and outside outlet for mobile generator.

They did a great! job. I am very happy and would definitely use them again.

Description of Work
They were working for 2 days upgrading all of the lightning in the house and on the exterior of the house.

I found Hedgecock Electric on Angie's List (of course!!) and contacted them about installing a vanity mirror with internal lighting on my daughter's bedroom wall. it had to be mounted, wired and hung on the wall. I contacted them and got a quick response and we set up the time for him to come that following Tuesday and they came, knocked it out in a flash, and even installed a switch on the wall to turn it off and on. Fabulous job and it looks incredible and didn't break the bank!!! I am thrilled with the install and my daughter loves it. Thanks Hedgecock Electric!!!

All went off without a glitch. Mr. Hedgecock was detailed in planning and execution in all aspects. He was very personable and professional. He performed all tasks flawlessly, and cleaned-up after all work, whether in doors or out. I have already recommended Hedgecock Electric and Mr. Hedgecock to other associates for their consideration and use. The best and most comfortable experience with a vendor, and would strongly recommend him for others his expertise and professionalism!

Marty showed up on time and did the work pretty quickly in about 2,5 hours. The spotlights under the trees are working flawlessly and are beautiful at night. One thing I really liked about Marty is that he was very professional. After the job his final price came down about 30% of the original estimate due to the parts and the less time required for the installation. I was glad he reviewed the price, very honest and truly customer-oriented. I would hire him again for sure.

Description of Work
Run wire from the house to the end of backyard and under the lawn. Installed an outlet and a couple of landscape lightings

Most professional and courteous individual we have worked with in a very long time. Came the day we called. Will definitely be referring him to friends and family.

Description of Work
Changed out bad circuit breaker and replaced a breaker that had been installed as new by Lowdermilk Electric, but was an old used one.

He always takes a call, and will make an appointment with you, or call you back to let you know when he can schedule you. He is prompt, friendly, and very professional. I have used Marty at least three times and have already talked to him about future work. Marty replaced two old hardwired smoke detectors that I couldn't be sure that were working. He ran wiring for two new fixtures that I wanted in my living room and installed the fixtures. He also replaced two receptacles that were nonfunctional. He goes about his business and gets the job done. He cleans up after the job. He is always friendly and makes it so nice to have him doing work for you. I have been extremely pleased when he has done work for me. I found Marty on Angies List, and am glad that I did.

We have the experience and dedication to assist with all of your plumbing services, installs, and repairs! We guarantee your satisfaction and we won’t leave until the job is done right. We pride ourselves on the quality work we provide, while delivering great customer service! Check out our services offered and call or click to schedule a free estimate today!  …

Sanchez Construction is committed to excellence in every aspect of our business. We uphold a standard of integrity bound by fairness, honesty, and personal responsibility. Our distinction is the quality of service we bring to our customers. Our crew is dedicated and knowledgeable and we know what it takes to get your job done right. Give us a call or click for an estimate today!  …

HEDGECOCK ELECTRIC CO INC is currently rated 4.9 overall out of 5.

No, HEDGECOCK ELECTRIC CO INC does not offer a senior discount.