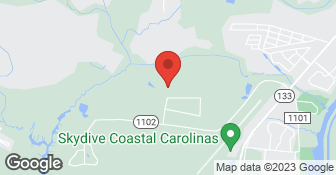 A Healthy Home is headquartered in Southport, NC and serves all of Brunswick and New Hanover Counties. We are committed to providing all services which will improve the quality of the air in your home starting from your crawl space all the way up to your attic. We are a licensed General Contractor and Certified Mold Inspector. We are also completely insured and provide an insurance certificate prior to starting any work....

Initially called to have them clean my air ducts. They offered a "special: of $199 for 10 vents, additonal vents at $15 each. They arrived on time, in fact early the day of work. Worked on cleaning out total of 17 vents. Done quickly. I then asked if they do mold remediation in my crawlspace and would they be able to replace my air ducts. Replied yes, quoted me $1000 for the mold remediation and $300 for labor of installing (owner provided) insulated air ducts. Also asked about UV light installation in air handler, quoted $300-$500 dollars. Since I had no others to base price on and the installer (George) and his assistant (sister in law) seemed to be competent. I ok'ed the work. Scheduled to be done on a Thursday and Friday (they said it would take 2-3 days). Went and purchased his recommended amounts of ducting and waited. Got call on Thursday morning an hour past the agreed time, installer had troubles with his truck and was stuck.....called a couple of hours later and was transferring tools to another vehicle to come over. They no showed Thursday. Friday after quite a few unanswered phone calls, the owner Arthur (George's father) called me back, apparently George had issues with getting another vehicle to get over to my home and that his cell phone (pre-paid) had no minutes left on it. The owner claimed that his son was in Wilmington trying to get another vehicle ( he was trading his broken truck and buying another one) and would show up as soon as he can. They finally showed up later on that afternoon and removed the old air ducts and applied the "solution" to the crawl space and supposed to have used a "bomb" spray to it too. Warned me to allow it to air out prior to returning to the house. The next morning, an hour later than expected they returned and began to "scrub" the mold off the joists in the crawl space. They worked till later that afternoon, needing more ducting (did not estimate enough, needed 2x original amt). While getting the additional, the owner (Arthur) called and asked me to use my credit card to order the UV light. I was for lost of words and said I wouldn't do that. Apparently he didn't have credit to purchase it. So, in the end, the UV light came in and it was installed....no sure if properly, will be checking it out with licensed electrician. When went to paid my balance due, they were "prompt" but did not have enough receipts, so wrote on back of original duct cleaning one. So finally thought I was finished with this "unique" company, a week later I get text messages late (around 9-10pm) asking where I was was and was I there... I had no idea what was going on...I got no reply from the sender (George, the installer). The next day the owner, Arthur, emailed me (again, very promptly, of course) demanding that I paid a $100 service call and $50 for gas because I had asked his son, via text messaging to come over and check out my house because the UV light he installed had tripped the breaker. I still at this point had no clue on what was going on. Owner called me discourteous for not returning his calls. I had been since his son leaving away in another state. I told him on phone after calling a few times to find out what was going on, because I did not call nor text message his son. I couldn't anyway, he had no more minutes on his pre-paid cell phone. Owner also claims his son left a power drill in my house....I still cannot find that item. This whole experience was a nightmare, I would not ever recommend this company to anyone. Very unprofessional and strange to say the least. I guess I was a fool to use them. They also claimed to have been on Angie's List......I can't find them here.

Efficient Air Heating & Cooling is a locally owned HVAC company that services Wilmington, NC and surrounding areas. We service all makes and models for residential and light commercial. We will keep you comfortable during the hottest and coldest days and we will treat your home like our own. We are fully licensed and insured in North Carolina. Financing is available!  …

O'Brien Service Company is a locally owned and operated business established in 1981 to provide a complete range of heating and air services, from installation to regular maintenance. Our highly trained and versatile technicians can expertly handle the most complex repairs and advise you on the benefits of regular maintenance. Our sales associates can help you select the most efficient and cost-effective system for your home. According to the Trane Customer Satisfaction Survey, 100% of our customers said they would recommend us to a friend. It may come as no surprise then, that O'Brien is the #1 rated Trane distributor in the region. Nationally, our customer service ranks 17th out of more than 1700 Trane dealers and we are consistently ranked in the top 20 year after year. Our commitment to customer satisfaction is evident in everything we do - from our insistence on wearing protective shoe covers to insure the cleanliness of your home, to offering the industry's highest quality products and service. This attention to detail is what allows us to say with confidence that your equipment will always be fixed right - guaranteed.  …

Insured
All statements concerning insurance, licenses, and bonds are informational only, and are self-reported. Since insurance, licenses and bonds can expire and can be cancelled, homeowners should always check such information for themselves.To find more licensing information for your state, visit our Find Licensing Requirements page.
General Information
Free Estimates
Yes
Eco-Friendly Accreditations
No
Senior Discount
10%
Emergency Service
Yes
Warranties
Yes

We offer free estimates to customers for affordable mold remediation and control in your crawl space, cleaning of your ductwork, a/c coils, dryer vent, carpets and upholstery. We can also move outside and pressure wash your driveway, siding, walks, and patio as well as clean your gutters and downspouts. When we leave your home the quality of your air and health will be dramatically improved.

How is Ahealthy Home overall rated?

Ahealthy Home is currently rated 1 overall out of 5.

No, Ahealthy Home does not offer eco-friendly accreditations.

No, Ahealthy Home does not offer a senior discount.

Are warranties offered by Ahealthy Home?

What services does Ahealthy Home offer?

Ahealthy Home offers the following services: We offer free estimates to customers for affordable mold remediation and control in your crawl space, cleaning of your ductwork, a/c coils, dryer vent, carpets and upholstery. We can also move outside and pressure wash your driveway, siding, walks, and patio as well as clean your gutters and downspouts. When we leave your home the quality of your air and health will be dramatically improved.