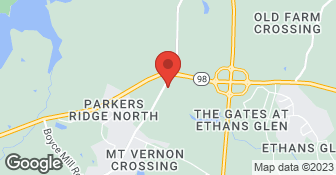 Welcome to Yardology, a North Carolina based company, providing sustainable, eco-friendly landscape design and maintenance services. Our #1 goal is customer satisfaction and providing the highest customer service in the industry. We offer a wide range of services and tailor each to your landscape’s specific needs

Very poorly. The whole company did not communicate well in any regard. Did not return phone calls, and did not inform me of time or dates that the work would be done on MY property. They did not respond well to questions about how the work was to be done, and the laborers and foremen did not speak English well.

Description of Work
Company was hired by my builder to fix backyard issues.

As you can tell by the provided ratings, my wife and I were very pleased with the work performed by Yardology. If you have landscaping needs, I very much recommend you consider Yardology. They were very thorough, flexible, and punctual, and they went above and beyond my expectations for the service. In regards to being thorough, Yardology kept performing until the job was done right. In the beginning, I essentially signed up for a flat fee for a day's work, as I knew what work needed to be done. I went the route of a flat fee, because I knew we may need some flexibility for the actual work. Yardology came out the first day and worked for a few hours. As is common with these type jobs, they found many stumps that still needed grinding before the grading could be complete. Eric worked directly with the tree company who cut my trees to get them back out to do some additional work. Yardology then came out again a couple days later to further complete the work. Again, Yardology found some stumps that needed to be removed in order for the job to be done right. Eric again worked directly with a tree company to have them come out. The company came out and worked, and Yardology promptly came out again to complete the work. The third time was a charm, and Yardology was able to complete the work. The quality of the work was great, and Eric was not satisfied until he knew the job was done and I was satisfied. Regarding Yardology's flexibility, they really worked to fit within my schedule and to do what they could to get the work done as quickly as possible once they began. Originally, the tree company was supposed to come out to my house in September, but due to a hurricane, they were pulled in other directions and had to delay my job. Yardology had already been scheduled to come in a couple days after them, so I had to reschedule. Eric was completely sympathetic and advised he would come in soon after the tree work was done. The tree company then had an opening a week sooner than the rescheduled time. I advised Eric of the situation, and he advised they would do what they had to to squeeze me in after the tree work was done. I even suggested a specific day based on my work schedule, and Eric said he would make it happen. As mentioned, Yardology had to come out a few times due to additional stump work being necessary. Two of those occasions were on Saturdays, and the owner himself came out the better part of a Saturday to finish the work. Long story short, Yardology worked within my schedule, and once the job began, they moved quickly to get it completed. As far as going above and beyond, the list is pretty long here. They were very thorough and professional in completing the work, but beyond that, they did many small things that were not even expected. He helped me get some materials (purchased and delivered) that were not part of the job at a discounted rate with no upcharge. Additionally, I decided separately to bring in gravel to put in one area for a parking pad. Eric had his guys use their equipment to spread it out, and thus it saved me what would have been a full day's work to spread it. Also, we had agreed on grading in select cleared areas. In evaluating the situation, Eric offered to essentially grade my entire back yard and some additional spots. In doing so, it meant a great deal more work time for Yardology. Despite that, Eric did not raise the price on me. Outside of that, I at the last minute engaged Eric to plant some trees. For a pretty small gig, Eric worked to obtain multiple quotes and had his crew perform the work quickly after I made a decision. On top of these things, Eric even offered to let me borrow a piece of equipment for me to complete my grass seeding. To be honest, I actually approached Eric about paying him more at the completion of service. That may sound crazy, but I like to be fair with people I deal with (especially when I feel they are trying to treat me right). Eric declined, and he kept the price as originally quoted. Coming out of the situation, I can say it was one of the most positive situations I have had in working with a contractor in recent memory. Without question, my wife and I would certainly hire Yardology again.

Description of Work
My wife and I had a large number of trees removed from our yard by another company. Once those trees were removed, we had the plan to expand our usable yard area. In order to do that, we needed the cleared area to be smoothed out and graded. In addition, we wanted to plant some ornamental trees and plants in select spots where some larger trees had been removed. My neighbor down the street was already having work performed by Yardology, and he provided Eric's (the Yardology owner) information. I then called Eric to have him stop by, check out the area, and provide a quote. I liked what Eric and to say, and I was happy with the provided quote. We decided to hire Yardology for the job.

It was pretty good. We had some along they way just uncovering some issues say overall it was built the way that we wanted it to be built.

Description of Work
I use Yardology for landscaping services. They installed a patio.

Cost is probably the number one factor and they're pretty easy to work with.

Description of Work
I use Yardology for landscaping services. They did a whole bunch of planting of trees and bushes and some draining issues that we had so it was pretty big. We've used them several times in the past.

From the owner, to the project manager, to the crew, Yardology held our satisfaction and happiness as a top priority. They were truly invested in understanding and delivering the vision we had in mind. Every team member of Yardology was committed to providing outstanding service. They were genuinely kind and personable. As an example, I selected a particular stone from a stone yard, and the moment it was delivered, one of the installers brought to my attention that is was flaking and splitting. At no fault of their own (as stone is naturally sourced and coloring/quality/etc is unpredictable), they returned the two pallets and purchased a more expensive stone and covered the cost without raising my end cost. Especially in construction, I have never witnessed such outstanding service and honor. Yardology far exceeded expectations with our hardscape. It was a blast discussing plans and ideas with Eric and his team, and we are excited for Yardology to begin our landscaping phase. Our neighbors are eager to get their projects underway as well after seeing ours!

Description of Work
Yardology installed the most beautiful stone patio and seat wall in our backyard. They were able to create a gorgeous design right over an existing concrete pad to expand our square footage and provide stunning architectural appeal and aesthetics. I was aiming for a rustic, inviting gathering space, and Eric remembered that from our very first conversation. He is incredibly knowledgeable and is sincere when he says he wants you to love the final product.

Everything was perfect! They did an excellent job. They called to let me know they were coming which was nice. They were right on time, they cleaned up after themselves and it looks beautiful.

Description of Work
They did pavers from my driveway to my screen porch area.

We specialize in concrete leveling services and more! We guarantee your satisfaction, and we won’t leave until the job is done right. We pride ourselves on the quality work we provide, while delivering great customer service! Check out all the services we offer below and call -or- click to schedule a free estimate today!  …

We do residential and commercial interior and exterior paint, drywall and interior and exterior carpentry. We are very professional when it comes to our work we will always put the customer first. We have been doing this line of work for 25+ years we are well experienced. Can't wait to hear from you and if you have any question we'll answer it. Call -or- click to schedule a free estimate today!  …

How is Yardology overall rated?

Yardology is currently rated 4.2 overall out of 5.

What days are Yardology open?

What payment options does Yardology provide

Does Yardology offer a senior discount?

No, Yardology does not offer a senior discount.

Are warranties offered by Yardology?

No, Yardology does not offer warranties.

What services does Yardology offer?