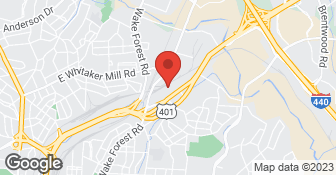 We are small business. We have been servicing the Triangle for many years. We offer reasonable prices, and phenomenal results. We know that details matter. We can help you get the landscape and lawn you've always dreamed of!  …

I can't say enough good things about Sloan's! Everyone from Jael on the phone, to Davey the service tech in the field were delightful to work with. Jael worked magic to get a tech out for my clients on very short notice and was very knowledgeable about what we needed. Davey was professional and extremely thorough with his inspection. He identified a lot of issues two other inspectors missed. He explained his findings clearly and I ended up learning a lot because he was willing to share his expertise! We received a detailed report the same day, and a clear and concise estimate the next. I definitely recommend Sloan Service Company for their honest, professional, reliable and skilled staff and the outstanding work they do!

All communication was prompt and timely. The work was done quickly and professionally. It ended up costing more than we had planned but only because the wiring had to travel so far. Daryl explained exactly what he was going to do and then did it. When it ended up being a bit more work than they had thought, they stuck by their original quote. Very satisfied.

They responded immediately and were great. Jason got me in for a same day appointment after my HVAC wasn't cooling. Daniel came out and immediately diagnosed and fixed the problem for a reasonable rate. He answered all of my questions and after looking at my other HVAC let me know that I may need an additional capacitor but with further testing thought it wasn't needed and didn't try to upsell me. He was very honest, I would highly recommend and will hire again.

Joel and Jason were very professional and experts in their field. They both responded quickly to resolve the electrical and A/C issues. We highly recommend Sloan Service Company!

Description of Work
Electrical and HVAC

Excellent. Joel is very professional and easy to deal with.

All work was completed efficiently..

Everything during my scheduled repair visit went great. Corey was amazing. He was super friendly and fast. He correctly diagnosed and repaired my flickering bathroom lights by replacing the light switch. He didn't try to get me to buy any additional services or repairs - which is so refreshing. I also asked him about several other electrical things I would like done around my house - like new light fixtures, moving a smoke alarm, and adding a light switch for the attic. He took a look at all of my requests and gave me great feedback and suggestions. I will definitely be calling Sloan Service Company in the future for the projects I discussed with Corey.

Description of Work
Replacement of a bad light switch.

Sloan Services was called at approximately 11:00 in the a.m. as an emergency due to the A/C not cooling the house. We called this company based on prior service to my daughter's house and a good rating. Let me tell you, I was not disappointed. They accommodated me for the same day on Saturday. The "technician" showed up quickly at around 2:00 p.m. and discovered a block of ice in the coils. He explained the process in a very detail manner like nobody ever did before. The "technician" performed a complete maintenance including the outside unit and 3 pounds of Freon were added. As he kept working, I just kept thinking on how much this emergency was going to cost me. To my surprise, the "technician" charged me a lot less of what I was expecting. As you should know, the Freon itself is expensive. Well, at the end I asked him for a business card because I wanted for him to be my permanent HVAC person to deal with my house. Another surprise, the "technician" was actually the president of the company. I was extremely happy and humbled that he made my emergency his priority. If I could give this company an A plus, I would do it. Thank you sir for your outstanding services.

The work went well, and Cory did a great job. However, the price was extremely high for what was performed. I would shop around for a better price next time I need electrical work.