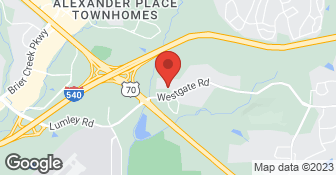 Onofrio Construction, Inc. is a full service professional construction company that has been satisfying Customers since 2001. We have built a solid reputation on quality workmanship, excellence and integrity. We offer interior and exterior services for commercial, multi-family, and residential in the areas of roofing, siding, painting, welding, decks, fences, electrical, HVAC, carpentry, sheet rock, doors, windows, concrete, asphalt, and much more. We guarantee our work to your satisfaction....

We are providers of electrical services in the Raleigh/Durham area. Our mission is to maintain the highest quality and professionalism from start to finish. We are confident in our results because all our jobs are custom for the needs of each home. We strive for the highest degree of quality products and workmanship. During the years in business, has satisfied many customers. It is our reputation of quality work, professionalism, and customer service our customers continue to rely on us for their needs. To understand the expectations of our customers, we take great care to work and communicate with every customer professionally. We base our reputation on service, safety, and quality. Call us today and find out how we can meet all your electrical service needs!  …

Here at Mallards Decks and Commercial Cleaning, we sustain our business on quality and integrity. With over 5 years of experience we are experts in the Interior and Painting trade for residential and commercial customers. We are committed to quality from the beginning to the end of your project. We are locally owned and operated and look forward to earning your business. Contact us today and we look forward to earning your business  …

If your community HOA is going to contract with Onofrio, my neighbors and I would recommend that you oppose it. Onofrio subcontracted the roof replacement with an incompetent bunch of roofers. There were very slow, put the wrong vents on the dryer exit vent pipes, and pulled exhaust vent pipes from gas furnaces and dryers. Some of my neighbors had leaks which were not there previously and wood floors were damaged. Onofrio was very slow if at all to respond to requests to fix. It took longer than 3 weeks before I got a response on the dryer vent, The person they sent out first (who was an Onofrio employee) to replace the wrong dryer vent exit argued with me that I was wrong. When I finally showed him from inside the attic that I indeed knew what I was talking about, his response was just "oh". At least the second person they sent out (who wasn't an Onofrio employee) did a standup job on the vent exit replacement and repairing where the exhaust pipe had be pulled out. I've made sure to tell everyone that I know not to use Onforio.

The gentleman who answered the phone was polite, direct, and honest. He let me know that they're in their busiest time of year & would not be able to send an estimator for 2-3 weeks. While this doesn't work for our timeline, I appreciate that he didn't waste our time by promising more than they could deliver. I'll consider calling them again for future needs.

Description of Work
misc handyman services at a commercial office

A request was sent on 5/2/17 inquiring if they would be able and interested in doing repair work for me. To date I have not heard back from them. Very unprofessional in my opinion, which means it's highly unlikely I would ever approach them for work again.

Description of Work
Repair minor subfloor damage and replace band board by back door.

Only one very obvious splitting board was replaced. Railings that were unstable were not replaced. Places that were splintered were left. Pickets were left unattached. Staining was uneven and the top board of the privacy fence was not cleared of bird droppings or stained. I called the owner back out to review and he agreed more work needed to be done. Two guys came out with a nail guy and attempted to secure the loose railings. I had to go out and make suggestions as to how best to angle the gun. No wood was replaced or resurfaced. The top of the privacy fence visible from my loft was still incomplete. The workers did not use a ladder but attempted to reach the area with a spray gun. I took the recommendation of my HOA manager as well as the townhouse neighborhood near me. With two trips I still have a lousy splintered deck and am out $1000.

Description of Work
I contracted with the rep to make repairs which would bring the deck "up to code for the upcoming sale of the home." Then pressure wash and stain.

This was the best yet of the special construction offers I've used. The person who came was energetic, careful, enthusiastic, and capable. I will look him up the next time I need something done.

Description of Work
touched up deck and steps painting, fixed steps in garage, reattached items in garage that had become unattached

fantastic, better than it was before it was broken. This guy was amazing and respectful, kind, immaculate with respect to keeping the area clean, etc. Will call again! and again!

Handyman did what was needed to be done per request in a quick, efficient manner.

Went well. He did a nice and neat job and cleaned up behind himself.

Description of Work
He was there to install a bathroom fan and was willing to add a couple of other things that I asked of him while he was there. Very nice of him to add to his workload.

Took a little more than the 3 hours, but reasonable that did so. Professional job

I purchased 3 hours of handy man services as an Angie's big deal. Onofrio Construction provided the service. Two men arrived on time, and repaired a hole in the wall, one in the ceiling due to plumbing issues, and reattached a curtain bracket which had pulled out from the wall. The sheet rock repaired included painting the ceiling and the wall. They did a good job and did it within one and half hours. The only additional charges I had to pay was $25 for materials that included mud/putty, paint, etc. Onofrio Construction did a good job at a reasonable price. Their employees were professionals. I would use them again.

Description of Work
Repaired a holes in wall, a hole in the ceiling, and reattached curtain rod