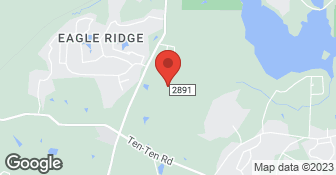 We specialize in residential hardscape design and installation. Whether you have a blank slate or you would like to enhance your yard's features, we are the company you have been looking for! Do you dream of an inviting grill area and entertaining patio? What about a beautiful walkway, fire pit or outdoor fireplace? We provide excellent service at extremely competitive rates throughout the Raleigh/Durham area. We take pride in our work and it shows from our work ethic to the final result! A beautiful yard is possible, let us help! Nicolas' Hardscapes & Drainage has been servicing the Raleigh, Durham and Chapel Hill areas for over 10 years. The company is owned and operated by Nicolas. We specialize in hardscape, drainage & grading design projects at extremely reasonable prices to meet your budget and needs. We warranty our hardscaping! Are you in the military or a veteran? Ask us about our military discount.**please note we do not pour or work with concrete.**...

We can recommend Nicolas @ Nicolas Hardscape and Drainage LLC. Several other recommended drainage companies would not touch this job. Nicolas not only corrected the problem , but went over and beyond our expectations. He does what he says. Both he and his crew are polite and professional in answering all questions. He kept us informed daily on project status . Simply stated, Nicolas Hardscape and Draining is an efficient and knowledgeable team. We strongly recommend his company and will definitely use Nicolas in the future.

Description of Work
He recently solved a very difficult drainage problem , one created by the builder years ago which effected the integrity of the foundation.

Thank you for your thoughtful review. We are so pleased that we were able to exceed your expectations. Drainage issues are often tricky and attention to detail is imperative. We appreciate you entrusting us to address your issues after failed attempts from others. Thank you for recognizing our work ethic and expertise. We are grateful for your business and were happy to solve the issues for you and your neighbors.
5.0

Material was delivered several days before the job started, workers arrived on time and completed the job in one day, as promised. We couldn’t be more pleased with the results.

Description of Work
Addition to patio

Thank you for the review. We enjoyed working on your project. We are pleased to hear that you are happy with our design and attention to detail. Communication is key to any successful project and we are pleased to hear your satisfaction with our team. Thank you for your business, give us a call should you need us in the future. We hope you enjoy your new space for years to come.
5.0

Nicolas and his team were great. From the first interaction with Nicolas to the very end, it was always professional and insightful. Since the installation was completed, it has not rained, so we have not been able to put it to the test, but I have all the faith it's going to work. Definite hire. One bit of feedback is Nicolas does not have a standard landscaping contract. If you want a contract you will need to do it yourself, but make sure you talk to him about it from the very beginning. This was a bit weird for me since I won't have this level of work done without a contract, but once we talked about it, he had no issues signing something. He stands by his work, offers a warranty and can issue a certificate of insurance. Communication was never an issue. He was sure to update you on all the necessary steps and keep you in the loop on exactly what work was being done and awaited approval. Once the work was underway, his guys were professional and efficient. What I liked most about Nicolas was his personal interaction with me. Yes, he is running a business and like all of us, out to make a living, but Nicolas was sure to build a rapport with me, so our conversations weren't always about work. I learned a lot about him in a short time and there is a reason he has been successful. If you're hesitating before moving forward, just talk to him. You'll see he is the right man for the job.

Thank you for taking the time to write a review. We were so pleased you entrusted us to transform your space. We enjoyed working with you and are so pleased we were able to exceed your expectations. We appreciate you commenting on our entire team. We pride ourselves on excellent communication! Thank you for your business.
5.0

Nicolas & his colleague, Abel, were both super responsive and helpful. My job was much smaller than most of the work they take on but they gave me the same help and attention as if it were a huge, expansive project. I am thrilled with the quality, speed and price of their work and appreciate that they were able to help me out! I also appreciate that both Abel and Nicolas were friendly, professional and on-time! I would very definitely hire Nicolas for any project I pursue and feel very comfortable strongly recommending him to my friends and neighbors!

Thank you for the review. We enjoyed working on your project. We are pleased to hear that you are happy with our design and attention to detail. Communication is key to any successful project and we are pleased to hear your satisfaction with our team. Thank you for your business, give us a call should you need us in the future. We hope you enjoy your new space for years to come.
5.0

Excellent. Crew was professional and competent. The finished product exceeded our expectations.

It was an absolute pleasure working on this project with you. What a great space and now you have an excellent entertaining area for family and friends. Thank you for entrusting our team to bring your vision to life. Please let us know if we can be of assistance in the future.
5.0

Nicolas Drainage and Hardscapes helped my neighbors and me with two drainage projects at Marley Way in Fuquay. They were the third company to try to help. The other landscape contractors would talk a good game, but they rushed through the project, with no apparent supervision and did not help much with my problem, one charged $2,800 and the other $12,000, probably at least half of that was wasted. Then I tried Nicolas Drainage and Hardscapes. Nicolas is hands on, he got out there, often using surveying type tools to get the proper elevations, as he meticulously graded the drainage channels with equipment small enough go over plywood so not to damage other parts of the yard, while his crew used mostly used hand-held tools like shovels and wheel barrels. One project I split with a neighbor for $4,000 (my part was $2,000) and the other I split the cost of $3,000 with two neighbors (my part was $1,000). Nicolas makes a point to stay in touch, and has fine-tuned the project over a year later for no extra charge, while the failed contractors have not reached out, even though I have tried to be nice to them.

Thank you for your thoughtful review. We are so pleased that we were able to exceed your expectations. Drainage issues are often tricky and attention to detail is imperative. We appreciate you entrusting us to address your issues after failed attempts from others. Thank you for recognizing our work ethic and expertise. We are grateful for your business and were happy to solve the issues for you and your neighbors.
5.0

After the bank/slope behind our house washed out I contacted Nicolas because I wanted someone skilled in drainage and erosion control. Nicolas and his team went above and beyond all of our expectations for the major work they did in October 2020. Nicolas fully and quickly accessed the problems while clearly explaining them to us. He gave us a fair and reasonable estimate and completed the work early. He followed up with us several times after the work to make sure everything was draining properly. In June 2021 we needed additional service from Nicolas and just as before he was punctual and responsive to our situation. He again did 5 star quality work in all areas. Should we need his services again in the future, we would not hesitate to call him. Actually, we would not even consider calling anyone else! Nothing says satisfied customer like repeat business!

Description of Work
Regrading of bank/slope after a washout. Additional drainage and erosion control behind and beside house. Gutter drains moved and repaired.

We always love to hear from prior customers! We were thrilled you entrusted this next project to us. Thank you for the kind review and of course for being a valued repeat customer. We are happy we were able to solve your drainage issues. We appreciate your business and should you need us again we are just a phone call away. Have a wonderful summer.
5.0

Outstanding once again! Nicolas always comes through with exceptional work and great customer service. Back in 2014, I had Nicolas install a paver patio with a retaining wall. Now, in 2021, I’ve decided that it was time to add onto the patio along the side of my house. Nicolas and crew did a fantastic job as usual! The side of the house now looks great, has really opened up and now drains the way it should. Nicolas is my go to person for these projects, give him a call!

Thanks for calling us back out to add to your project. We always enjoy seeing past customers and catching up. Thanks for calling on us once again to work on your outdoor space. We are so happy to hear you are thrilled with the results. We hope you have a wonderful summer!
5.0

Nicholas was so friendly and helpful! His prices were very reasonable. He is very talented and his craftsmanship is amazing! I highly recommend him!

Thank you for the review. We enjoyed working on your project. We are pleased to hear that you are happy with our design and attention to detail. We hope you enjoy your new space for years to come.
5.0

We contacted Nicolas in May 2020 to install a patio, natural gas firepit and seating walls with lights. We waited for him until February 2021 to get the work done and he did not disappoint. Nicolas is professional, knowledgeable and pleasant to work with. We are very happy with the final product and receive compliments from everyone who visits our home. Nicolas and his team are awesome and we will not hesitate to use him again or refer him.

Description of Work
We had patio, natural gas fire pit and seating walls with lights installed.

It was such a pleasure working with you! Thank you for being such wonderful clients. The end result really turned out beautifully and we are grateful you chose us to create it! We hope you enjoy this wonderful entertaining spot with your family and friends for many years to come.

Concrete or any wood work, asphalt or masonry. Any repairs of any kind!