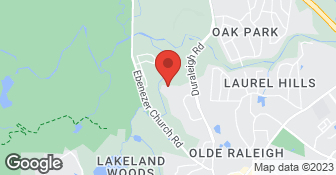 We are a local painting contractor company serving the triangle area (Raleigh, Durham, Chapel Hill, Cary, Apex, Garner, Knightdale, Wake Forest, Fuquay-Varina, Holly Springs). We specialize in Interior/Exterior Painting, Deck Restoration, Carpentry/Drywall Repair, Wallpaper/Popcorn Ceiling Removal, and Pressure Washing. As a previous 7x ANGIE'S LIST SUPER SERVICE AWARD WINNER, we stake our reputation on all of our services; that's why all of our work comes with a TWO-YEAR SATISFACTION GUARANTEE! Please give us a call at 919-827-7985, or check us out at www.matrixpaintinginc.com to learn more. Matrix Painting Inc's commitment to first-rate service and quality workmanship has set the standard by which all other painters are measured. The Matrix crew is clean, courteous, efficient, and extremely skilled. Our experienced painters guarantee clean, prompt service. We will beat any price, so call for a free estimate today! Don't trust your painting needs to just anyone with a brush....

Outstanding on every front. Job completed in 3.5 days as promised, the baseboards painted thru the entire house look terrific, all 3 rooms had a different color and Selena the team lead and crew were meticulous in all of the work they did. The fixes that were needed after a previous contractor painted (terribly) after popcorn removal were fixed with all the attention to detail required. We will use Matrix Painting again to remove master bedroom popcorn ceiling and to power wash and stain our deck. Ryan's bid wasn't the cheapest of the 4 estimates we received, but the work done was exceptional. Very professional, responsive and respectful of our home . Really glad we found Matrix/Ryan and his team!

Description of Work
Painted 3 rooms (master, spare & home office), 5 inch baseboards installed prior to this project, they needed painting, trim around doors in each room and extensive drywall where a water access door was. Ceiling and wall fixes in our recently renovated kitchen/living room Ryan's team basically fixed the job that the previous contractor messed up.

Ryan was great from the beginning. He was communicative, professional, and did was he said he would. And his prices was far better than other quotes. He also was very good about working with my schedule when coordinating multiple contractors. A+

I was really pleased with the work done by Matrix. Ryan and Humberto were a pleasure to work with and just amazingly responsive. Our house and wooden fence needed multiple repairs and then paint. It was nice to have a responsible team on site to take care of it all at one time. I definitely recommend Matrix and plan to use the company again in the future for the interior.

We scheduled a time for a quote. Ryan showed up the day of the quote and was prompt and professional. The price was in the midrange of the other quotes I received but it was more than fair. This was still in the midst of the pandemic and everyone and their mother was doing home projects so they were a little backed up but we were able to decide on a date that worked for both of us. The paint crew showed up promptly and was professional and courteous and followed/utilized all possible Covid safety precautions . I had several rooms painted so it took a few days as it had been a while since I last painted so it required a fair bit of prep work. There were a few things here and there that I requested they give a little more attention to but nothing out of the ordinary for a paint job. Ryan came on the last day of the job to make sure everything was done to my satisfaction. They did a great job! I was very satisfied and would definitely hire them again.

Excellent. We are very pleased with the outcome, quality, time frame, price, etc.

This review is based on my experience with the owner Ryan Critoria. My wife and I just bought our first home and were looking to get the house painted. We scheduled an appointment with Ryan to get a quote for paint services. We had already gotten a few other quotes from other paint companies that were dramatically cheaper, but Ryan seemed very professional and made us feel like we would be getting the best possible paint service in the area. We booked with Ryan feeling like we were going in the right direction to get our Kitchen and Bedroom painted in our first home. The paint crew was fine but some things didn’t seem like they were done correctly in my kitchen. The job seemed rushed and it was. I called Ryan and asked him if he could come out to take a look at the kitchen to make sure he could let his team know what needed to be done to get the job completed. My wife and I are not professionals when it came to assessing the paint job, that’s what the project manager is supposed to do but there were obvious errors in the paintjob. Ryan said there was no need for him to come back out because he could just send his crew back out to fix the problems. He said I could send him pictures instead. I would have felt more comfortable with him coming back to take a look at it so we could have discussed exactly what the finished product should look like. This was the first sign in him showing us he did not care about us being completely happy with the finished product. He only cared about getting our money. I sent him the pictures and Selena came back to fix the problems we had a few days later. I get the invoice from him and I paid it the same day he sent it to me from my savings account. A few days later I get an e-mail from him saying the payment couldn’t be processed because my bank would not allow a transaction out of my savings account. He said he would be adding a $10 check return fee to the invoice. I asked him if he could take the $10 off of the original balance because it was a simple error and I would transfer the funds to my checking account and pay the balance that day. He said he could not because it wasn’t his fault the bank blocked the transaction and he wasn’t trying to nickel and dime me over $10 but he refused to adjust the balance. Again, this was him letting us know he did not appreciate our business. We spent $2,860 with Ryan on a kitchen and a bedroom. It was never about the $10 for us. We just got a vinyl fence installed for thousands of dollars and received 5-star service from Index Fencing. We just wanted to be appreciated as customers, as anyone would who work hard for their money. We did not receive a 5-star service from Ryan, as his company does not deserve a 5-star rating. He never even asked if we were completely satisfied with the final product after Selena came back and cleaned up the errors. I don’t think he really cared. I can’t speak on anybody else’s experience with him. Maybe they were treated better, but we will not be doing any business in the future with Matrix Painting.

They were very easy to work with, very accommodating and obviously interested in doing the job to our satisfaction.I would call them again and not hesitate to recommend them.

Quality paint job! Matrix did an amazing job painting the interior of my home again! This is the third time I have used them and would definitely use again.

Very well. Started and ended on time, and price was reasonable.