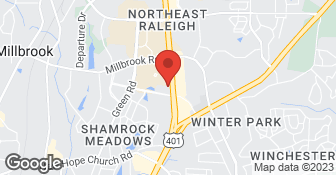 At Showroom Flooring, we’re committed to meeting all your flooring needs with personalized care and professionalism you won’t find anywhere else in the Chapel Hill, NC region. With over 50 years of combined industry experience, our knowledgeable flooring contractors are happy to help you find the best solution for your home to give you the gorgeous floors you’ve always wanted at a price you can afford.  …

8 employees. No subcontractors. Service fee is $75 but only $39.99 for Angie's List Members. No extra charge for after hours or weekend service. You may contact us through email or at 919-500-5171. Also doing business as Precision Overhead Garage Door Service. Additional contact: Susan Grega. Award Winning.  …

They did a great job. Cathy works in the carpet department and was very professional. She was patient with me as I made my decisions. She was very helpful with working within my budget. The installation went great as well. They were very efficient and helped me move my furniture. I would definitely use them again and I would highly recommend them.

Description of Work
They installed carpet in my home.

I've been to this Lowe's several times, and normally have okay experiences...and then I decided to get an estimate for wood flooring. I paid $35 to have their contractor, Legacy Flooring, come out to take measurements for an estimate. Legacy called me a little after 10 o'clock at night, and insisted on scheduling an appointment before 4 p.m. on each day that I suggested. I agreed to have them come out on a Friday at 4:00 p.m., and told them that I would have to leave work early. I took time off work to make sure that I was at home when they arrived. Legacy did not arrive at 4, and no one called. At 4:40, Ben called to tell me that they would be at my house in 20-30 minutes, and that he "hope this is not a problem." I said, "It is a problem. Are you aware that your appointment was at 4, and that I took off work to make sure that I was here?" Ben rudely responded that he was measuring other customers' homes. I had to remind him that I, too, am a customer. He arrived with Taylor about 25 minutes later. Do you think either of them bothered to acknowledge that they were more than an hour late, or apologized for wasting my time? The answer is no. I told Ben that running behind schedule is understandable, but that he had to have realized that he was behind schedule earlier in the day, and could and should have called well before 4 o'clock to let me know. That way, I could have worked a full day. He rudely responded that they have a lot of customers and that he had to take measurements at their homes. It took every bit of etiquette not to tell them right then and there to get the **** out of my house. I allowed them to finish their measurements and they left. I brought this to Lowe's attention, only to be told that this is a common complaint that they get about Ben and Legacy Flooring. The Lowe's manager also told me that the installers are different people, so I wouldn't be dealing with Ben. I told him that if taking measurements had to be scheduled after 10 o'clock at night, and showing up to take the measurements was this unprofessional, I can't imagine what I would have to deal with to actually get floors installed. More than a week later when I had not heard from Lowe's, I called to see about the estimate (I paid for it, after all). I was given a vague estimate over the phone, and had to request that a written estimate be sent by email. I received one a few days later. The vagueness of that wasn't much better, and I did not receive a useful written estimate until I went to the store and waited 30 minutes for someone who knew how to print one from their system returned from lunch to give me an estimate. Needless to say, my purchase and installation will not be done by Lowe's. Even more importantly, it will not be done by Legacy Flooring. In fairness, Lowe's installed wood flooring in my home several years ago when I lived in another state. That experience was entirely positive, and cause me to consider Lowe's again for this upcoming project.

Lowes managed the process well and was the single point of contact for the job. They were attentive to my schedule and ensured the job was done to my satisfaction.

The Lowes representative never showed for their own appointment, nor did they call with an explanation. I tried to be understanding. I went back to the Pro Desk and talked to another very helpful person who confirmed that the appointment was indeed booked, but could offer no explanation for the failure to appear or for a explanation call. Many calls were made by the Pro Services person and assurances given that all would be corrected and to expect a call that day or the very next. No call was ever received. In yet another trip to Lowes, I notified the manager of the lack of follow-up by Lowes, but wasn't eager to waste more of my time to contract the services. There are too many other companies that would like the business. I give a "D" rather than an "F" because the folks at the Service desk were very helpful. Too bad they too wasted their time.

Description of Work
Tried to get an estimate for home attic insulation. The folks at the Pro Service counter were very responsive and helpful and booked an appointment.

My husband quickly installed the 3/4 HP garbage disposal and found that it's really not difficult to do. We upgraded from a 1/2 HP and just am amazed at the difference. I didn't think it would make such a big difference just going up a tad bit on the HP of the product. This was what was in there, so we chose to stick with the same brand. It's even a little quieter than the one that was in there. For the price and the results, I would definitely recommend buying this product from Lowe's to others.

Description of Work
I bought our In Sink Erator Badger 15S 3/4-Hp Garbage Disposal from Lowe's. It was highly recommended by the sales representative in the store. He said it was easy to intstall.

They did an outstanding job. They were a little late, but it was due to the manufacturer, not Lowe’s. Ultimately, the job got done.

Description of Work
They put in 13 new Pella windows. It took 8 hours for them to do the job.

The salesman at the time that I was there did a pretty good job. He's not working there anymore. I got good windows. If I could get the same sales person I probably would use them again.

Description of Work
They provided new windows and replaced some of the existing windows.

They were really quick and easy. I liked everything altogether. Everything was done very quickly. They had selection. I would give them all A's. They were very good.

Description of Work
They installed carpets.

It was a great experience from beginning to end. The people in the store were very nice, the manager worked to get the price down and the installers were very professional. It was a good experience.

Description of Work
I use Lowe's for my home improvement store. I last bought bird feed and stuff like that.