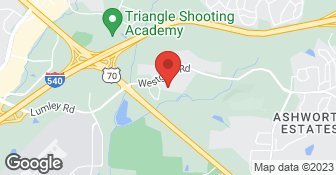 Eco Irrigation in Raleigh has over thirty years experience providing the Triangle with professional irrigation services. We provide full service irrigation in Raleigh and have built our reputation on accurately diagnosing irrigation system problems, providing expert repairs and offering our clients the latest technologies to upgrade their systems and conserve water. We are committed to offering our clients repairs and improvements that provide a return on investment through water savings and a healthier landscape....

Give us a call today for all of your lawn & yard work needs!  …

1) First and foremost, they have failed to properly diagnose and rectify the leak in the irrigation line that runs parallel to the upward slope in our drive. Extensive tech notes attribute it either to a leaky sprinkler head or rain water accumulation. Without going into a lengthy description, suffice it to say that neither of these sources logically correspond to the phenomenon we observe -- a significant leak in our irrigation system that has now TWICE been misdiagnosed by Eco Irrigation. There is no leak when the system is turned off in the fall. 2) Overcharging - a) Their basic charge for a spring start-up is $165 for "up to 8 zones"; since we only have 4 zones this is a lot for turning on some water and adjusting a few sprinkler heads. b) Before the work was begun, we agreed that they would replace our modular timer with a Rainbird modular timer costing $149.50, but when the bill came we had been charged $237. They did revise the amount to the agreed upon sum once this was pointed out, but this discrepancy was particularly annoying since a timer with wifi compatibility (which ours is not) was only $12 more ($161.10) on the Rainbird website.

He worked harder than I could have and solved the issues with my system.

I never received a response to either of my emails.

Description of Work
I emailed this company twice asking if they were interested and available to price my residential irrigation project. They never responded to either email.

Chris and the team at Eco Irrigation are awesome. They communicate quickly by email and phone and are super friendly and professional. They explained to me what they were going to do and why they needed to do it, and handled all the city inspection stuff for me. I was really happy with the work they did. My system was completely busted because the back flow had a huge crack down the side of the pipe. They replaced it for me and got my system up and running like new again. I am really pleased with the work. It took two trips because the first day we scheduled work it started pouring it down with rain halfway through the day, but you can't control the weather.

Very friendly (two technicians), also very knowledgeable. Felt like they were giving me an honest estimate. Will plan to use them for the repair!

Not really sure what changed, but Eco Irrigation was my go-to company for various sprinkler system problems (residential) for the past few years. Then, recently, I called for a quote on a simple pvc pipe extension and, after a phone conversation with Tom and some texts/emails, I never heard back. His first response to my initial request for service was that it was against code. I had to explain that I wanted the pipe in question extended OUTSIDE the unfinished studs (i.e. not inside) in anticipation of new Sheetrock in my garage. I checked the code and there is no issue. So, Instead of confirming that we were on the same page, or even acknowledging my clarifying e-mail back to him, I rec'd no returned calls or emails. That was it, they'd evidently decided, without informing me, that they'd rather not take the job. I utilized Absolute Backflow for what turned out to be a 40 min job. I won't be using Eco Irrigation again as a result.

We did not install the system at the customer’s home. When we arrived on our first visit we noticed pressurized PVC pipe hanging from the ceiling and on the side walls of the garage. This is a code violation and a very bad practice. This pipe is exposed and can be easily damaged or could freeze and burst flooding the garage. I made the decision not to alter the pipe as requested by the customer.
3.0

The service was originally scheduled for Aug 28, but I received a call a couple hours before the previously scheduled appointment letting me know that the technician was behind on a job and couldn't make our appointment. The next available time to come out was a week later. The work began on Sept 8 but was not able to be completed until Sept 14. The technician only had one valve box when he first came. After 6.5hrs of billable labor, the work was completed to my satisfaction. I received the invoices in the mail for the work on Oct 17 (later the owner informed me they were setn via email, however I never received them), despite asking to pay upon completion of the work. I was told that the technician had to submit the job and I would be billed later. While the invoice for the parts was reasonable, the rate charged for labor I felt was excessive especially given the pace of the work. The repair work charged was 11% of initial cost to install our system with 50 sprinklers on 1/2 acre of land (including the labor, parts, inspections, etc.) Save your money, use a different service provider. If you choose this one, get an agreed to set amount before any work begins.

Description of Work
Removed and capped one rotor, moved one rotor, replaced 2 lateral lines that were split by large rock since original installation (had to relocated around the same rock), replaced 3 valve boxes that had sunken since installation 2 yrs ago.

Upon receipt of the invoice the customer asked by email for a substantial decrease in the bill. Yes the job did take 6.5 hours as it was a difficult excavation dealing with multiple pipes and rock. As far as the labor rate we charge it is in the range of any other trade professional in the area. I always find it interesting how someone who never has done a repair such as this, knows how long it should take.
1.0

The field technician and I walked thru the work and he provided me an estimate of approximately 90 dollars to do the work. I told him to go ahead and do the work which he did and did a fine job implementing. I was ready to pay him before he left and he said he would send me a bill. The bill was for $270. I called the owner and questioned the bill and the cost was $270 so pay the bill or I will refer you to a bill collector. I told him I was not going to pay the bill and he asked me what the job was worth. I said I was given an estimate of 90. He said I must of misunderstood, which I did not. The field technician had worked thru the cost based on the specifics we discussed and said $90. The owner called me a cheap scate which I am not. I pay my bills but not when the estimate is so far off from the bill. Will not use them ever again.

Description of Work
Provider shut off two sprinkler heads, raised one slightly, moved one approximately 6 ft, and did an overall system check which included some minor adjustments. System covers a small front yard area only,

I am not sure how this customer heard $90.00 for the scope of the work we performed.Our minimum service charge is $95.00 and we worked on this project for 2.5 hours. Ultimately I only charged him what he thought he heard.
5.0

Came right on time and was here for 2.5 hours. Checked the whole system and adjusted the schedule to be more efficient. After checking everything out was on the phone with me for a while patiently explaining things. Gave me an estimate and was very honest with his assessment and even mentioned how I could save money if I did somethings myself. Overall, very happy with this company and would definitely use them again.

He had come back to do a leak repair. It was small. I was very happy with them.

Description of Work
We recently used Eco Irrigation. They restarted irrigation systems after they have been neutralized and located a couple of leaks.