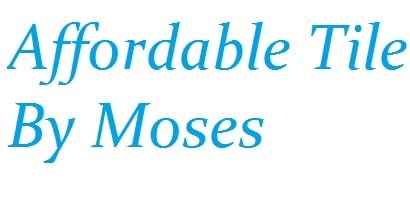 Affordable Tile By Moses is operated by the owner. Business was established in 2003, and has two regular employees. We accept checks, money orders, and cash. We offer 10% - 15% discount on the project over $500.

Over the last ten years we have used Mr. Moses for three jobs: tiling the bathroom floors, repairing a leak in a tiled shower, and a backsplash for a large “L” shaped kitchen counter. With the backsplash he suggested using the tiles we had purchased in a way – improved – that we hadn’t thought of. Each time he has been prompt, arrived when he said he would, did the work in a neat way, cleaned up after himself and left the work area looking better than it did when he arrived. We are very happy with his work and wouldn’t hesitate to hire him again.

Everything went well! Ken was very prompt, knowledgeable, and professional. His price was also reasonable. My kitchen looks beautiful! Reach out to him if you’re looking for great quality work.

We are very excited about the new tiles that were installed in our bathroom-it looks great! The quality of work great and he works quickly. We highly recommend Affordable Tile By Moses!

Moses did an excellent job on my kitchen floor. He is very knowledgeable about ceramic tiling and provided great detail throughout the process. If there was an issue that needed to be addressed, this was communicated to me beforehand. I appreciated that he was very punctual and thoughtful about what needed to be done to complete the work. Thank you for your spirit of excellence! LP

Everything delivered exactly as promised. Ken was on time for both an estimate and the work. Price was fair. And, most of all he stuck with the job until the end. I had a tile that was not any easy install and Ken worked with me until it was right. Could recommend more…

Moses is very professional, helpful and responsive. He came to our house and did a great job, he explained the whole process, we are very happy with the final result and would hire him again. Very satisfied with his work!

Description of Work
Tile in the kitchen

Went very well. Very prompt and answered all my questions and concerns. Very nice person. Did a great job

I'm very pleased with Ken's work to regrout our shower. He was very timely and responsive in regards to questions, scheduling and getting the work done. He is pleasant, a good listener and honest. Even steering me away from a more expensive solution that was unnecessary in our case. I've used bigger advertised companies for grout cleaning in the past. It was a much better experience to deal with one person whose focus is customer satisfaction. He did a great job.

Moses did an outstanding job and deserves credit for his craftsmanship. We used a tricky glass tile with multiple sizes and the end result is better than we could have expected! Moses is very courteous and diligent. We highly recommend his work!

Description of Work
Tile backsplash in the kitchen

I needed to match and replace some broken tile in my kitchen. Ken did a great job of finding a closely-matching color and installing it quickly and for a reasonable price. Would definitely hire again for any tile work!

Me Moses did a great job of installing the tile flooring for a hallway and laundry room. He is knowledgeable, punctual, and reasonably priced. Very professional!!

Description of Work
Flooring with tile

Moses was Great! He gave design advice, always came on time, was very professional, worked very hard, cleaned up nicely each day and created a beautiful custom shower for us!

Very well, he did exactly what we wanted. We were very pleased.

Went great as usual. We've hired Moses before to work on other tile floors in our house. We'll have him come back as we have other tile projects planned and he's always been honest and punctual and extremely affordable. He's a very hard worker and does very good work. Would definitely recommend him to other people looking for quality work at a very good price.

Description of Work
We had Moses come back to the house to work on our kitchen floor.

The tile backsplash installation in my kitchen went very well. I had a subway tile format installed. Mr. Moses installed the subway tile pattern with precision which made the end result look excellent.

I'm very impressed with the quality of work and overall customer experience provided by Affordable Tile by Moses. I just happened to see his truck one day, called the number on the side, and scheduled an estimate with Moses for the next morning. The price was good, Moses was pleasant to work with, and I'm very satisfied with the job performed. I'm about to call him to schedule another job!

Moses was great. We have an unusual kitchen shape, with lots of corners, and he took the time to make sure everything looked as good as could. The price was fair. He was good communicating with me throughout the process. I would use him again.

When I came for the estimate, I fully explained to the customer and his wife the challenges posed by the shape of their tile (hexagon shaped tile) because of nature of their backsplash area design. When installing tiles, the most visible areas are the priorities. In customer’s kitchen, the end of the cabinets, and around the window frames are the most visible and important areas, so those were my priorities. During the installation, customer and his wife were there from beginning to the end of the installation, also were home all night & the next day when I came back to grout it. After I completed his job, he fully inspected the job and he paid. I received a notification from the bank that customer’s check bounced, so I called him, to let him know that I will be stopping by in his house to get Money Order or cash for the bad check he wrote me, and that’s when he told me that I cannot come back to his house, claiming that he was not satisfy with my job – he offered me $150.00 as a full payment, but I told him no, that he will pay the full amount of the job ($695) Once in a while, unfortunately, you will get this kind of customer, but I thank God that there are much greater fair customers out there. Mr. [Member Name Removed] still have not replaced his bank returned check or make an arrangement to pay for his backsplash job-two weeks after the completion. He lied about everything that he does not know anything about. To find out the truth, just call any of the customers that posted review for me, and ask them anything about me. Except this review from a very very dishonest people, I have not had any review less than A grade since 2017 because I’m always do anything in my power to satisfy all my customers. My reviews speak for themselves. Just compare his review against my many other reviews, you will easily figure out his motive.
5.0

Moses was great!!! Pricing was competitive and very good quality workmanship, completed on time. Floor to ceiling tile with a glass accent - just as we wanted it!

Moses did a great job and left everything spic and span! He also gave me advice on some other tile problems I was having and gave me his honest opinion about how to approach-he does not try to sell you on extra work.

Description of Work
Moses cleaned my floor tile and re grouted around tub.

I was having a new dishwasher installed and ran into an issue with elevated floor tiles. Mr. Moses was quick to respond to my same day need removed several tiles so the installers could return and connect the dishwasher. He also returned a few days later to reinstall new floor tiles and was careful to make sure everything was level. He was extremely courteous and made sure I understood everything he was doing - and kept in touch via text message until the job was complete. I will definitely call him again if I need any tile work.

Mr. Moses showed up early morning and stayed until late in the afternoon. The work was thorough and we are very happy with the finished product. He was very pleasant to talk to and I would not hesitate to recommend him to others.