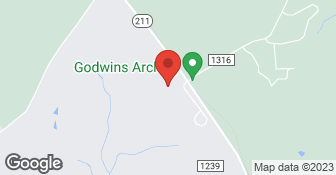 Expensive ($1,450,00). About 20% more expensive than other estimate but they could do the work in a reasonable time (because they stated they had the backhoe in the neighborhood) . Responsive if you need a sewer line connection to city services with some urgency (next two or three weeks). After they did the work they said they failed to state that the agreed price for the work was a cash price. Check or credit card payment would be an additional 7%. My neighbor was charged the additional price characterized as a sales tax according to them. After the work, the yard was a mess but when they returned for their equipment they saw I was attempting to repair the damage and did some remedial work which was appreciated but it will likely take years for the lawn to recover (likely the normal damage associated with this type of job). They do not replant scrubs dug up up during the trenching. I had two tree stumps that I asked them to remove and they got one and tried the other but the root system was to extensive but I appreciate the effort. If I had to do it again I would hire another company to do the trenching and oversee their work myself and insist on the use of ground cloths to pile the soil. They are polite folks,

Description of Work
Hook up to Fayetteville city sewer line

He is the owner and operator. He is bonded and state licensed who does installations and repairs, with 100% guarantee. Rick Burdette is the person who re-did the bathroom in 2009. This time he fixed a leak in my other bathroom about a year ago and I had called him for it. He is a plumber of my choice and his prices are reasonable. He does one thing I didn't agree with; he had his son with him and was supervising his son do some of the work. His son was obviously having an on the job training, but other than that he was alright. I think if he wants to train his train he should do it someone else's plumbing not mine. His prices were very reasonable and I was very happy with what he charged me. The last little job he did I think he didn't charge me anything. His quality was fine. He came on time, finished the job and when he put in the bathroom he was there when he said he would be every day. The punctuality was fine and he knows his business. He is a plumber, but the only thing I was docking on was that he was training his son on my job; let him train on someone else's job. He knows what he is doing and he is trying to setup his son to take over his business, which is not a wrong thing. He was also supervising his son all the time. I will use him again in the future.

Description of Work
I used Residential Plumbing to fix a leak in my other bathroom.