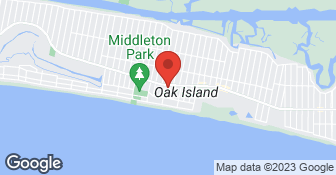 Residential and Commercial heating and air conditioning service, repairs, and installations. We are a small family owned business. Work on all brands, and sell Trane and Mitsubishi equipment....

Excellent Install. The salesperson visited the house and inspected the attic and access in the ceiling and provided an accurate contract price to install the new system and remove the old. The work was performed on the date agreed on, and the technicians were on time, calling me the day before to confirm the appointment arrival time. Work was performed in a timely neat and professional manner and the technicians were courteous and provided me updates on their progress. I have used Mansfield, Oak Island NC for years to service the old system which was 23 years old and needed replacing. They have always provided fast same-day service to repair the old system. Their office staff is also very courteous, friendly and helpful to answer any questions.

Installed wrong air handler. Multiple issues with units. They kept coming back, but could not get them to get a Trane Rep out. Shoddy connection to duct work. Had to pay another company to correct. Not sure they were familiar with the high end models.

It did not go well, it took 6 weeks for Mansfield to resolve the issue, the service techs would never take time to completely diagnose the system or else they are poorly trained.

Description of Work
Mansfield installed a new Trane HVAC in Oct 2015, in October 2016 the unit failed and it took Mansfield 6 weeks to resolve the issue.

They were unresponsive to phone calls requesting an estimate. They were beyond rude on the phone.

Description of Work
Install venting for gas kiln through roof. We had the work done by others for an hourly fee,

Great experience. Allen was always punctual with appointments and provide information we needed to make a decision. And while they were not the lowest estimate we received they were the only ones that were timely with appointments and follow-up. The install men were very thorough with the installation. This installation was difficult since it was done in the heat of July and they had to install a system from ground up. They did a good job on clean up and if I had one thing to say negative it would be they should have a better vacuum to do their clean up.

Perfect. Responded within 45 minutes and had us up and running again within another 15. $95 well spent dollars.

Description of Work
Blew out clogged drain in A/C and reset.

Mansfield had been out previously to look at the area to be cooled/heated, and recommended the units to be installed. They then showed up on the agreed upon day, having called us that morning to give an approximate time they would be there. When they arrived, we discussed the installation process briefly, and they went right to work. The installation process was actually much quicker than we expected it to be. The work was done cleanly and efficiently, The technicians were courteous and friendly and very professional. They returned the next day to finish covering up the outside lines, and were obviously as proud of their work as we are pleased with it too. Once the installation was over, the area cooled off rapidly. It appears to us that the recommended units are appropriately sized, and we are very happy with the outcome. We highly recommend the Mansfield team.

The technician was on time and professional. My only complaint was that no paperwork was given to me after the service was completed so I had nothing to go by if I had questions or concerns. I did however receive paperwork in the mail a week later which stated the result of the repairs. I just wish this info was given DURING the service visit.

Mansfield Sales & Repair did a great job! All my text and email conversations were with Allen Isenhour of Mansfield. He quoted the bid, told me why the return needed to be changed, answered all my questions, and supervised the installation of the unit. I cannot praise him enough (and I still have not met him). Everything was done in a most professional manner to the point that I felt comfortable not being there to oversee the work. Allen even sent me photos via text to show me the finished results. How is that for service? We did go down the next weekend to inspect. Everything was clean, the return vent was installed just as I had hoped and there was no damage to the wall. However, l did feel that the fan speed was a little too high. I called Mansfield on Monday morning while we were there and asked them to come over and adjust the fan speed before we were to leave at noon to go home. Two technicians showed up within the hour, we consulted about it, they set the fan speed to the lowest setting. The Trane unit is much quitter than the old Goodman, and with an SEER rating of 14, I am looking forward to lower energy bills. I especially like the auto-changeover thermostat that will automatically switch between heating and cooling if no one in in the condo and it gets too hot in there. I unconditionally recommend Mansfield Sales and Repair for installation of a new HVAC system.

Description of Work
My wife and I own a condo at Oak Island Beach Villas in Caswell Beach, NC which we purchased in 2013. During a visit in January 2015, I examined the outdoor heat pump unit and was concerned with its condition. I called Margaret Rudd, the real estate agent who manages our unit, and learned that the HVAC system was 5 1/2 years old, and beyond warranty. It was a Goodman, which has not had good ratings from Consumer Reports. I did not want to face replacing the unit on an emergency basis in the middle of a hot summer day. So I asked 2 local vendors to quote replacing the entire HVAC system, which includes an indoor air handler. I did this all by email. I asked each vendor to quote a specific Trane unit. Mansfield was $400 less than the competitor, and provided more detailed information about the air handler and the thermostat. They also suggested that I bring the air handler system up to current code. I called the Caswell Beach building inspector and he confirmed the Mansfield solution was the way to go, even though he would not require it since it was a replacement. I awarded Mansfield the bid over the phone, and mailed a check to them for $2,000. Mansfield did the installation, including cutting a hole in the closet wall to install a new return vent. The inspection was completed on 02/18/2015.

It was wonderful. I've used them every 6 months. They do the routine maintenance. They are the best. Beth is accommodating and friendly.

O'Brien Service Company is a locally owned and operated business established in 1981 to provide a complete range of heating and air services, from installation to regular maintenance. Our highly trained and versatile technicians can expertly handle the most complex repairs and advise you on the benefits of regular maintenance. Our sales associates can help you select the most efficient and cost-effective system for your home. According to the Trane Customer Satisfaction Survey, 100% of our customers said they would recommend us to a friend. It may come as no surprise then, that O'Brien is the #1 rated Trane distributor in the region. Nationally, our customer service ranks 17th out of more than 1700 Trane dealers and we are consistently ranked in the top 20 year after year. Our commitment to customer satisfaction is evident in everything we do - from our insistence on wearing protective shoe covers to insure the cleanliness of your home, to offering the industry's highest quality products and service. This attention to detail is what allows us to say with confidence that your equipment will always be fixed right - guaranteed.  …

Salt Air, Inc. is a company founded on simple principles, but devoted to extraordinary service. We believe it is important for all families to enjoy clean, comfortable air when they’re inside their home. We believe that regular heating and air maintenance should be made simple, convenient and that families should not have to open themselves up to financial risk just to keep their units functional. As such, Salt Air provides a full lineup of air conditioning/HVAC installation, repair, and maintenance services, as well as peerless guarantees. Salt Air, Inc. is dedicated to keeping our clients in the Wilmington area comfortable. No job is too big or small, and we deliver 100% customer satisfaction on every project.  …

With over 27 years of HVAC industry experience, James & Son is a family owned and operated business committed to dependability and customer satisfaction. We are fully licensed, insured, and provide a full line of HVAC services including Installation, Maintenance, and Repairs. No job is too big or too small- our factory-trained technicians are skilled, and capable of servicing any brand of heating and air systems. We offer around the clock Emergency Services, and special financing when applicable. When you buy a maintenance agreement from us, our comfort advisors visit your home on a annual or semiannual basis in the off-season to thoroughly clean, check, calibrate and test your HVAC system. We’re looking to find and correct small issues before they cause big problems later on! Visit our website at www.jamesandsonhvac.com or give us a call to discuss your needs  …

MANSFIELD SALES & REPAIR INC is currently rated 4.5 overall out of 5.

No, MANSFIELD SALES & REPAIR INC does not offer a senior discount.