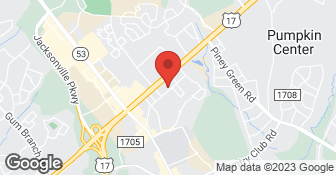 Pest control for roaches, ants, termites and fleas and many other pests. We specialize in: backyard fogging, yard sprays and termite repair. With over forty years of experience, we service residential and commercial properties as well as having permits to treat government facilities. David Dillingham, president and graduate of NC State University Pest Control....

May's denied any responsibility for this damage, so the cost came entirely out of our pockets even after paying yearly for termite inspections and quarterly for pest control. Their first response was, "We are not structural engineers." Neither was our contractor, but he spotted the problems in about 10 minutes. Then May's dragged out a contract from 1971 (we bought the house in 1996) and claimed that was the only contract they needed to honor. Our signatures were not on it, of course, and there was no address on the contract at all. That "contract" did not specify anything but the increase in cost for the service over the years. We are currently trying to locate the contract from 1996, but after moving 3000 miles away, we are not sure we can find it. In our opinion, May's has not acted responsibly toward good customers who believed in them for 19 years. At the least, they could have offered to reimburse us for the lumber needed to repair the foundation.

Description of Work
We bought our house in 1996. It was built in 1971 and had been under a termite contract with May's since that time. We continued with them because of this. In 2008, after our annual termite inspection, we were told that there was evidence of "old termite damage" in our crawl space. We immediately asked about this and were told that it was not a serious problem, that there was no evidence of active termites, and that it was nothing to worry about. Our service record proves that we ALWAYS acted on any recommendation made by May's, including replacing the vapor barrier, sump pump, and installing temperature sensitive vents. When we sold the house this year, the inspection showed serious termite damage to several floor joists, which we had to repair before the sale.

They do a decent job but their product doesn't work that well. The people that do it are good people. It is just that I haven't had great success with the solution they used. It seems like the pests come back so we've been having to do our own thing. The people that work for the company are great and very professional. It killed a few of the bugs but they were back within a week. The guy was very nice. I've heard good things about his product; it just didn't work well in our home.

Description of Work
We used them for pest control.

May Exterminating was the company that the builder used just a year ago when house was built. So far no termites. Today they sent a technician, Mike, to provide the annual inspection for renewal. He was very professional, thorough, answered all my questions and explained in detail their process of treatment when home was built. It was an educational moment. If I have other pest issues I will contact May exterminating first. As far as giving a B on price, truly I do not know what others charge. $125 for the year does not seem out of line. I guess its perspective of it all. Really its another insurance premium to protect against termites.

Their price is competitive for this area. I don't ever have to do anything other than let them in the house to inspect once a quarter. They come out, do their thing, let me know they were here and that's it; I have not bugs in my house. I have been using them for over 6 years.

Description of Work
I have a contract with May Exterminating for monthly pest control.

They have been pretty good. The only issue we had is the first guy that came out had to be sent away because his boots were very dirty. I will continue to use them.

Description of Work
I had my home treated for pests.

They showed up on time. Their customer services is very good. They are courteous, professional and respectful.

Description of Work
We have worked with May Exterminating for a number of years. Most recently, they did an inspection at our new home.

I have been using them at the house for the past five years. They have done a great job so far. They just finished redoing my inspection. I started with them on an annual contract of $375. Also, I was paying them $95 for annual maintenance service; however, I'm not sure if it went up yet. They have always been prompt when they come. They always send me my information ahead of time, letting me know when they will come out for an inspection or letting me know when my inspection is due. They always come on time. When they say they are going to be there, they are there.

Description of Work
I use May Exterminating Co for pest control services. They last came out for an inspection on the 15th of December.

Description of Work
I called the company for an appointment and the technician wasn't available. He was supposed to call me to confirm an appointment. when he didn't call for almost a week I called someone else. Then he calls the night before the unconfirmed appointment and was surprised that I didn't want him to come out.

They did well. They have been providing service for us since 1985. We like the price and their customer service is good. They are reasonable and less expensive than another competitor. When we did have an issue they were prompt and came out in less than an hour to address the issue. They are very professional. They gave us a really good deal but we would like it to be less expensive.

WHAT MAKES EASTLINE NORTH CAROLINA'S CHOICE FOR PEST CONTROL CUSTOM PEST CONTROL Our pest control services are specifically designed to treat and prevent pests that are common in North Carolina. At EastLine, we don't just get rid of pests. We do our best to protect your home & family. We use a variety of environmentally friendly products that will help protect your home, and most importantly your family, from unwanted pests. SERVICE-MINDED PROFESSIONALS As a locally owned business, quality service is important to us. All of our pest control professionals go through months of training and state testing before ever going out on a job. We spend as much time as needed on location to address your specific pest issue. The chemicals we use are tailored to eliminate the specific pests invading your space. OUR GUARANTEE Our pest management technicians are highly-trained, courteous, and punctual. We guarantee to be respectful of your time and efficient in eradicating and preventing pest problems from occurring. We stay up-to-date on the best pest control practices from the North Carolina Structural Pest Control Committee. Our goal is to be the best pest control service in your area.  …

All statements concerning insurance, licenses, and bonds are informational only, and are self-reported. Since insurance, licenses and bonds can expire and can be cancelled, homeowners should always check such information for themselves.To find more licensing information for your state, visit our Find Licensing Requirements page.
General Information
Free Estimates
Ask for Details
Eco-Friendly Accreditations
No
Payment Options
American Express, Check, MasterCard, Visa, Discover, PayPal
Senior Discount
No
Warranties
Ask for details

How is May Exterminating Co overall rated?

May Exterminating Co is currently rated 4.3 overall out of 5.

What days are May Exterminating Co open?

May Exterminating Co is open:

What payment options does May Exterminating Co provide

Ask May Exterminating Co for details on free project estimates.

No, May Exterminating Co does not offer eco-friendly accreditations.

Does May Exterminating Co offer a senior discount?

No, May Exterminating Co does not offer a senior discount.

Are warranties offered by May Exterminating Co?

No, May Exterminating Co does not offer warranties.

What services does May Exterminating Co offer?

Are there any services May Exterminating Co does not offer?