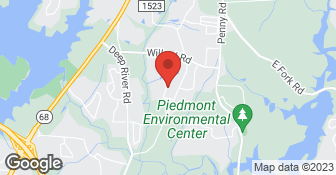 Affordable lawn care , with flexible lans to meet all budgets....

We provide personal, one on one consultations. With 15 years experience and a degree in horticulture. We offer knowlegable, professional landscaping, Hardscaping and mowing services.  …

Did good work--commented that the ground was so tough they had to make 2 passes. That means they wanted to get it done right and not just do the minimum required.

Very well - they contacted us quickly and came within a few days. Their equipment and crew were professional. The job was done speedily. No problems to report.

Description of Work
Aerating and seeding of front and back lawns

Only got in contact after I got in touch with Angie's List, but the only came after I called. I called again this week but still has not performed the service. I'm trying to sell the house and need the lawn in best condition. I need someone trustworthy that I can depend on.

Description of Work
Mowing weekly, but took a long tim and only got in touch after I contacted Angie's List. But still took two more after that to attempt to mow. I called again and said he would come but still has not mowed. I needed someone to mow weekly but that has not happened since I bought the service. I need someone trustworthy, as I am trying to sell the house and the grounds need to be kept groomed.

I am updating my review after the lack of response from Mr. Wilson about one of the jobs he performed for me. First job his company did, everything went great. Just a general pruning/mowing/cleaning of the yard. The second job was a seeding. I explained to him that we wanted new grass seed down in our backyard because it was mainly dirt and any time it rained, it was a swampy mess. I explained to him that I wanted grass that would come in thick (no patches anywhere; I even mentioned a specific kind of grass seed that my mom recommended) because we have two dogs and it would help keep them from getting muddy when they went outside after a rain storm. His guys came out, put the seed down and I could see within a week that the new grass was starting to come through. I kept it moist (like he instructed) and thought it was going to come in nicely. After a few weeks I noticed the grass was not really coming through in some places around my yard. I reached out and explained this to him and he said to just give it time. When it got so long I tried to cut it but my lawn mower wouldn't start so I called the company for a third job, to cut my backyard. When the guy finally showed up on the day of the appointment (he was almost an hour late with no phone call), he cut the grass and just left all the clippings everywhere. So I had to go outside and rake it all up myself, which took almost an hour. If that part of the job wasn't included in the cost, it should have been communicated to me. I would have been happy to pay a little extra for them to take the cut grass with them. After I got it all raked up, I noticed he had cut it so short that I could see the new grass was patchy and half of it was dead already. I gave it a couple weeks to let the grass grow out a bit in hopes that would change but it didn't. I emailed Mr. Wilson (who had been VERY responsive for any other email I sent him), let him know of my concerns and sent him pictures. After two days of not hearing from him I emailed again. Still no response. Needless to say he never returned my emails or called me to see how we could resolve the problem of my lawn. Like I said, any time I emailed him in the past he responded within a couple of hours. I guess it's different if there's a complaint/issue with a job performed. Due to lack of punctuality, job performance and communication, I will not be hiring them again.

Description of Work
General yard work for a couple of jobs. Lawn seeding for another job.

Fair. Done in a hurry. Leaving some grass un-cut and some areas not trimmed. He was very personable and respectful. It appears that he took on more work than he could handle. Plus, the weather did not cooperate, raining for days at a time, putting him behind with all of his scheduled mowing. So, had the circumstances been different, he may have been able to do higher quality work. Since my acreage was larger than that in the advertised deal, I agreed at the beginning to pay him a pro-rated increase to the original price.

Description of Work
Mowing and trimming.

Very Badly. They kept postponing doing the work. Eventually came but the worker did not equipment in working condition. Did not complete the job. He said he would come back and finish, but never did.

Description of Work
Landscaping and Clean up

Very badly. They would not respond to requests to do the work for many weeks. When they did show up their equipment broke down. They never came back to finish the job.

Description of Work
Trimming of bushes

We took advantage of Anglie's List's special offer of 3 hrs/$99 and scheduled Mr. Wilson to come on March 17. He did not come but called later. He was to come on the 18th but did not show, and no call. I called and he came the next week. He rightly convinced us not to move the rhododendron, said he would have someone prune it, put down mulch, and aerate an area for grass. The man he sent did not know about the aerating work and did not have the equipment. He did not bring shears for pruning so borrowed ours. Worked 2 1/2 hours and did a fine job with the rhododendron and mulch. We liked Mr. Wilson and imagine he usually does good work, judging by reviews. On this instance things were not impressive.

Description of Work
We wanted a rhododendron moved and a small area to be prepared for grass planting.

Fantastic. Gave great advice for future that kept us from wasting a lot of time and money. Can't beat that!

Description of Work
Aeration of our entire lot. Had not been done since we moved in.

They were very professional and followed any instructions and worked diligently during the 3 hours. I would use again.