Insulation
Flooring Sales and Installation
Drywall
Decks and Porches
Licensing
All statements concerning insurance, licenses, and bonds are informational only, and are self-reported. Since insurance, licenses and bonds can expire and can be cancelled, homeowners should always check such information for themselves. To find more licensing information for your state, visit our Find Licensing Requirements page.
Business Details 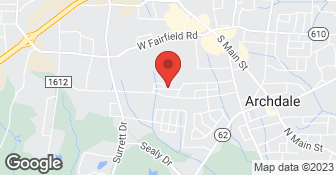 SUPPORT YOUR LOCAL BUSINESS!! Need Quality work done from one of the most trusted local home improvement companys? Call or text John at (971)-347-7439 Email at martinjohn1111@yahoo.com Here at JNM Construction we pride ourselves in the Quality of our Work and the Integrity in which we do it. FIND/FOLLOW US ON FACEBOOK : https://www.facebook.com/Jnm-construction-300682237269573/ FIND/FOLLOW US ON GOOGLE : Https://g.page/jnm-remodeling-construction SUPPORT YOUR LOCAL BUSINESS!! SERIOUS INQUIRES ONLY!!!...

We have the experience and dedication to bring your dreams to reality! Specializing in Insulation Services, we guarantee your satisfaction, and we won’t leave until the job is done right. We pride ourselves on the quality work we provide, while delivering great customer service! Call 336.245.4562 or click to schedule a free estimate today!

We do not offer Roof Repairs. J.W. Arnold Commercial & Residential Roofing LLC's mission is to be a provider that brings back the personal touch with our customers. We will build a relationship that will last a lifetime after you see our quality work. As a locally owned and operated business we feel invested in our clients and constantly strive for customer satisfaction. We won't leave until the job is done right! Call or click to schedule an estimate today!

Crossover Roofing is owned and operated by Mary Jane Hedrick. Her dream was to have her own company and that came true on Oct 3rd 2017. Her journey began in 2014 at a large company, she realized quickly that she loved working with customer and strives for excellent service, as a rookie she sold 110 her first year and became the operation manager. In 2016 she started another company with a partner that grew quickly, receiving 17 5 star google reviews and sold over 200 jobs in 1 year. In Late September of 2017. Her dreams came true. She is the only known Female roofing contractor in the Triad. She loves helping people. HAAG Certfied, fully insured.

John did an amazing job. The quality of his work was so professional. He aims to please his clients at the same time offering his expertise...