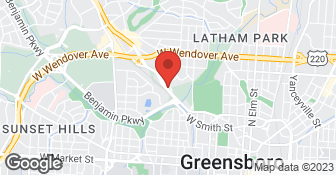 Duct Doctor USA of The Triad

Due to COVID-19 concerns Duct Doctor is NOT currently working in occupied homes. Duct Doctor has been a single-focus Air Duct Cleaner since 1985. Technicians are well-trained by NADCA Certified Air System Cleaning Specialists and perform cleaning using the source removal procedure.  …

For over a decade, the professionals at Thermo Direct Inc have worked hard for our friends and neighbors in the Triangle area. Helping homeowners and business owners, our comfort system technicians will make sure that your property’s heating and air conditioning equipment works as reliably and energy efficiently as possible. For projects big and small, we provide honest, cost-effective service. Relax... The Doctor is in the House!  …

Comfort First Heating and Cooling takes great pleasure in being the friendliest, most caring and competent air conditioning and heating service, repair and installation company in North Carolina & Virginia. Our more than 20 years of residential and commercial experience gives us the confidence needed to boldly offer the most aggressive,thoughtful Written Guarantee in the industry. Everything we do, from answering your first call to seeing the savings in your electricity after our visit, is meticulously planned because we feel that every detail of your comfort is valuable. If you need air conditioning and heating service, repair or installation and live in central North Carolina, we have technicians locally that can serve you. Contact Us today to find the people and comfort you can count on! Financing is available and Military discounts.  …

I called Williams to report my air conditioning wasn't working. Terry appeared soon after. He informed me the fan motor was out.This was on a 90 degree Saturday, of course. He said it might be Monday before he could get the part. My husband who is in poor health and I went to our daughter's for the night. The next morning, Sunday, Terry called and was on his way to our house with a fan motor. Problem solved! He even called the following day to be sure there were no problems.

From initial assessment of our needs, recommended solution, and system installation, we could not be more pleased. Our installation was more difficult than most, partly because our unit was housed in a tight-fitting attick enclosure. The quality of work was excellent down to the last detail and the installers answered all our questions with answers we could understand. We recommend Williams Plumbing, Heating & Air very highly and would not hesitate to employ them in the future.

Ridge came out to help us, was very explanatory and helped to immediately fix the problem. They are very fair, helpful and nice people to work with.

Repaired everything as expected and did it for a very fair price. I will continue to use them for anything I need that they can do.

Description of Work
i've used them multiple times now. They are excellent with their responsiveness and quality of work. They repaired a broken well pump valve that wasn't working correctly as well as the pressure pump under the house.

I have been using them for 20 years.

Description of Work
I use Williams Plumbing Heating & Air Conditioning. They did heating, plumbing, and air conditioning in the past. I have a service contract. They come on a quarterly basis to do checks on the heat pump and if I have a plumbing issue, I call them.

I have to have them do the maintenance because it's not a commonly used unit in the area. When I asked about a name-brand, they lied and said they didn't carry those brands and pushed more expensive, featured brand onto me. My unit broke down not long after they installed it and I've had nothing but problems with it. I went from spending $5500 for the unit to being sold an $8500 unit. I felt taken advantage of.

Description of Work
They installed my HVAC unit and maintain it.

They are reliable, excellent and affordable.

Description of Work
I had to have several different plumbing issues fixed.

Our results have been mixed. This vendor seemed pretty good, but our initial inspection revealed mediocre AC performance, but no issues, leading them to suggest completely new systems for around $16K. Since our systems were only a couple of years old, we declined this course of action. One service call involved a service person coming out, quickly surmising a faulty overfill pump, returning with the wrong part and then deciding it was too late in the afternoon to return it, so he returned late the next day with the correct part. I can't help but believe that our close proximity to his house played a role in his decision to wait until the next day to finish the job. On another occasion I called to schedule our regular fall HVAC check-up and within a couple of hours our furnace shut off. After I checked everything out, I called back to see if maybe someone had come out early. The people answering the phones were very rude with the "left hand" did not seem to know what the "right hand" was doing. When I tried to call back again at 4:45pm, their phones had already switched over to their answering service and I later got a service person who did not speak good English, seemed very annoyed, and knew nothing of our situation. We suffered thru an early cold spell over the weekend. Calling back on Monday, the next available appointment was a week out. Luckily, our neighbor had an HVAC vendor, Carolina Quality Air, over for a minor issue, and they gladly came over, reset our system to get it up and running, found some defective parts still under warranty which were the cause of our initial mediocre performance. After I cancelled our regular appointment, I wrote the manager, Mr. John Carter, outlining our difficulties and received a very nice letter thanking me for my feedback and giving us one free service call and a free 1 year service agreement as an "token appeasement" (his words). So far, we have yet to use these services.

Description of Work
We switched over to WILLIAMS HVAC after moving into our new house in late 2008 (we had previously used WILLIAMSON HVAC for our HVAC maintenance and repair until they increased their prices and their service people became very inconsistent in both knowledge and quality). We used Williams for an initial HVAC inspection and then again annually with some minor service calls in between, mostly the result of our unfamiliarity with our new HVAC systems.

They did a good job and were fast. The water kept running, and my water bill kept going up. They came out and replaced all the pipes under my house. They showed up on time. They were polite and cleaned up afterward.

Description of Work
Putting in new pipes under the house.

How can this be okay with anyone? I would imagine that a salesman rather than repairman should be His title.

Description of Work
Came to look into water heater problem said we would need a new water heater at cost of $1200. We asked if we could get a water heater and have that installed. Quote went to $600 with no guarantee of labor cost. We declined. The Home Depot service man charged $69 to fix loose water heater and and turn up the thermostat. Problem solved.