Gutters
Decks and Porches
Fencing
Kitchen and Bath Remodeling
Hardwood Flooring Sales and Installation
Carpet Sales and Installation
Licensing
Insured
All statements concerning insurance, licenses, and bonds are informational only, and are self-reported. Since insurance, licenses and bonds can expire and can be cancelled, homeowners should always check such information for themselves. To find more licensing information for your state, visit our Find Licensing Requirements page.
Business Details 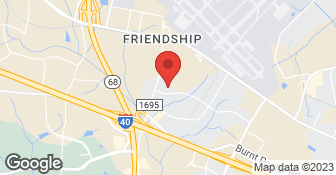 We are experts in Roofing, Replacement Windows, Vinyl, Rock, & Shake Siding, Chain Link Fences, Decks, and Walk-In Safe Tubs & Showers. We also offer great financing options such as low interest financing & same as cash options. We are an A+ Rated with the Better Business Bureau and have been in business for more than a decade. We are Insured, Professional, Licensed General Contractors, and we love to make our customers happy. We treat every job as if we are working on our own home and we take extra pride in our work....

Say goodbye to clogged downspouts and underground plumbing issues! The GutterShutter gutter protection system is a beautiful addition to any home, with a variety of color options. Add curb appeal and value to your property with GutterShutter’s crown molding look and feel quality materials and performance! If you need to replace your gutters, give us a call — our teams will do it all! We’ll remove your old gutters and install the high-quality GutterShutter system as a replacement on your home. Your home should be a place of sanctuary and comfort. We aim to protect you, your family and your belongings with a quality roof over your head. As a homeowner, it can seem like there are always things that need to be replaced or fixed. When the time comes to getting quality work done on your home’s roof, you need to find reputable Roofing Company to make sure the job gets done right. Different maintenance comes with different industry jargon, and we understand it can be overwhelming and sometimes confusing to understand everything that is being done. We promise to be completely transparent and to keep you confident and knowledgeable throughout our time together. Big Anchor Roofing & Gutters is your one stop shop for all your roofing & Gutter needs . We have been in business for multiple years, And take pride in ourselves on delivering high quality work with premium service, from a friendly and knowledgeable staff. And the best part, We offer affordability without cutting corners. No project is too big or too small. Give us a call to schedule an appointment! Senior & Veteran Discounts !!! * Discounts on full installs and original price only! https://youtu.be/kH3SKyBVjAE https://youtu.be/KZaP-hVPauA

**Experts in Seamless Gutter Installation and Leaf protection** Your Neighborhood Gutter Team Servicing homeowners within a 75 mile radius of Mooresville NC. The Gutter Team is family owned and operated with the highest quality 100% USA made and manufactured materials. Contact us today for your convenient, no obligation, free consultation and estimate!

We are a company that is locally owned with a strong commitment to customer service. We do not believe in overselling to our neighbors and believe that quality is the most important thing we have to offer. Greg has been in this business for more than ten years and has lived in this area for all of his life. It is very important that his customers feel that he can be reached at all times for questions or problems. Greg is known by co-workers and his spouse to be a perfectionist. This contributes to his skill at this job, and as customers, you can be assured he will get the job done correctly.

The installation was great and professional. However, get everything in writing. I was quoted one price and was told that price included a discount. Once the job was finished. We received a bill for the exact amount of the discount!! We called but the representative had quit! We still owe them plus major finance company. FYI Get everything in writing. Do not take any word those fast talking sales ...

3 1/2 months later, I was told by the owner it’s completed after a 2nd rebuild and if I did not sign off with approval he will lien my home and it will expose/ruin my credit. The 2nd rebuild was due to the first outside contractor they hired to build my deck. The floor was not leveled, rails were different heights. One side if the rail was 8 to 10 inches from the house and the other side was flush...

Although we signed a contract with the company in mid June and was told that work would start within 2-3 weeks, they only began working on our project in August. The company installed a composite deck which we were informed by its salesman that this was the best type of deck due to its neat appearance of not having any nail holes, unlike wood decks. However, this was not the case. Every single scr...

This is a follow-up to a previous review, in which I gave them a "D." Now they're at an F. In my first review, I spoke of the lack of follow up and response to my request for a written quote. Despite having both my phone number and my email address, they chose to provide the quote in a response to my review publicly on Angie's List. Who does this? I saw it about three weeks after the fact, when I ...

Thank you so much for the very nice review! We hope you enjoy your home!