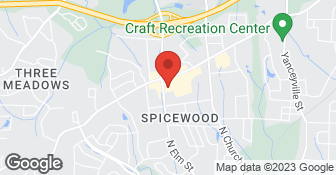 I had to finally email him for the estimate and all I got was prices no drawing, explanations follow-up phone call or anything. The others I dealt with we're much more complete and professional.

Description of Work
He came out to give us an estimate and he was really nice. And that's where it ended.

they did a great job--replaced two layers of sub floor in our den so we could have new carpet installed. Seamless job, no squeaks or creaks so far. Very pleased with the work that was performed.

Description of Work
replaced subfloor in our den

The project took about 2 weeks to complete and although we love the way the fence looks, we had some issues during construction. The guys hit a water line in our backyard and didn't tell us about it until after the job was complete. They did repair it but I felt they should've let us know. Also, there are some construction issues--some of the boards are installed with a slant to them that gets worse as they reach one end of the fence. We have also had to go back and re-nail several boards because the nails started coming out. Other than that, though, the fence looks fantastic. It's an unusual design and we had trouble finding someone to build it the way we wanted it. They did a nice job.

We specialize in all aspects of remodeling. We guarantee your satisfaction, and we won’t leave until the job is done right. We pride ourselves on the quality work we provide, while delivering great customer service! Call -or- click to schedule a free estimate today!  …

Our team has over 11 years of experience installing hardwood, laminate, and luxury vinyl plank floors. We started working under a big name hardwood floors company in the Triangle but in 2013, we decided to venture out on our own closer to home. We prioritize quality over quantity and strive to provide the best possible experience to our customers. We love what we do and are professional craftsmen. Our focus is on our customers’ unique needs and they can depend on us to provide a quick response time, an affordable estimate, and the best work for their hard-earned money.  …

At Flow Flooring, we are your one stop shop for all your flooring needs. We specialize in LVT, Laminate, VCT, and Hardwood flooring. We have many years of experience. Give us a call today for your free estimate!  …

Bonded
Insured
All statements concerning insurance, licenses, and bonds are informational only, and are self-reported. Since insurance, licenses and bonds can expire and can be cancelled, homeowners should always check such information for themselves.To find more licensing information for your state, visit our Find Licensing Requirements page.
General Information
Free Estimates
Yes
Eco-Friendly Accreditations
Yes
Payment Options
Check, PayPal
Senior Discount
No
Warranties
Ask for details

No, C J CHEEK BUILDER INC does not offer a senior discount.

No, C J CHEEK BUILDER INC does not offer warranties.