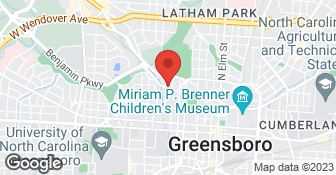 Bulwark is a family-owned company serving customers across the country. We provide quality customer service and a guarantee. If you see bugs after the initial service we will come back free of charge. Call us today, and we will earn your business through our professional technicians that are respectable and knowledgeable....

JD Paint pros is a company of professionals who specialize in painting anything and everything. With over 20 years of experience there isn't a job we cant handle. Your satisfaction is our priority. check us out on google for more reviews and pictures @ JD Paint Pros LLC  …

As an established, professional painting company for property managers, facility managers and building owners in the Triad area, we take every potential commercial or industrial paint job seriously. Our quality approach ensures that we will be punctual, organized and that we will deliver the value our clients expect.  …

We have the experience and dedication to do the job right the first time! We guarantee your satisfaction, and we won’t leave until the job is done right. Call to schedule an estimate today! Check us out on Facebook and after you are happy with the job we have performed please leave us a review here on Angie's List and on Facebook. We are happy to see your before and after pictures as well!  …

Bulwark Exterminating has been great for mitigating pest problems in our house. In particular, Davis has been the most attentive pro we've had. His visits are prompt, on time, and very thorough while always being friendly and respectful. A+

The man who came to my house was named Stan. I had called 3 or 4 exterminators for prices. I suppose that most of them do about the same kind of treatment. I chose Bulwark partly because their pricing structure seems simpler than some others. Also, they assured me they would treat all the places that needed it. I showed Stan 1 dead bug I'd saved. He said it looked like Smoky Brown Roach, a kind that lives outside but often comes indoors. He sprayed in the house (edges, corners, etc), including finished attic. He removed outlet covers and switch plates to dust inside the walls. He sprayed thoroughly outdoors around the perimeter of the house. He also went in the crawlspace about as far as I could expect him to go and sprayed a dust treatment there. He could tell I was freaked out by finding these bugs over a long period of time, so he did a lot to cover places I pointed out as well as doing his usual routine. He told me to expect to see dead ones for a few days possibly. I certainly saw a lot in the house that died that day and in the next 1-2 days. I've only seen a couple of small ones that seemed to be dying since that first week. There was no chemical smell afterward. Stan or someone else will return 2 months later for a second treatment, which should be $79. I intend to continue for several treatments until I don't see the nasty things anymore. Bulwark quoted me $110 on the phone for the first treatment, and that's what I paid. I felt that he went beyond the basic service without nickel and diming me with charges.

Description of Work
Chemical treatment to get rid of roaches inside and outside the house.

I have been very pleased with Bulwark Exterminating. They come quarterly for preventive treatments and are thorough and responsive to any issues. Today they even removed all the outside webs on the windows which our many busy spiders have been work on (we live in woods). PAUL MARTIN does a great job, courteous and thorough. I requested that he doesn't come inside unless I ask as I often have young grandchildren here. But the outside work does keep the bugs from indoors.

When appointment was made, an employee explained why we were having the ant problem. Paul Martin was very professional, explained the services performed, and where he would apply the product. He understood our concern of having a toddler and pet in the house and informed when it was safe for them to wonder the house. I would recommend this companies services.

The service contract presented was not exactly as it was discussed over the phone when it was scheduled but a quick call and they made all the necessary adjustments. The service was only a few days ago so we have not been able to verify the effectiveness of the treatment but so far so good. Paul Martin was the technician and he was excellent. He was professional and prompt and seemed to do a very thorough job. Thanks, again!

Description of Work
We wanted some preventative extermination in the spring before the ants, spiders and earwigs decided to join us and multiply in our home.

Very well. Josh was the technician and he did a very good job.

It went very well. I did get frustrated, but that was more with the ants than with the company. If you have ever dealt with them, well.. they are persistent creatures. I called them up a few times after treatments, as as advertised they promptly returned and either treated again of changed the treatments. I had a few incidents with the ants returning, but again with regular maintenance and their prompt free follow up visits as needed between visits. I am very happy with the service.

Description of Work
A deal was found on Angie's List when looking for an exterminator. I was having issues with ants in and outside the house. Also was dealing with other bugs and spiders. Jumped on Angie's List to see who might be good,

Their responsiveness is good. They're reasonably priced and their prices are better compared to a lot of prominent companies. They are transparent in their quotations.

Description of Work
They do treatments at my house. I've been using them for over 2 years and they come in quarterly.

I have continued to use them. When they do their work I don't have insects. Why would you hire an exterminator more than once if it didn't work.

Description of Work
They did both inside and outside.