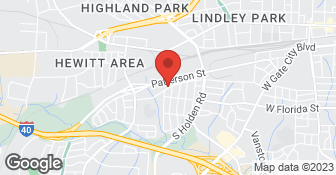 We are a complete home care company that does construction and landscape installation and maintence. We have 5 to 15 employees. We take credit cards and have an A rating with the BBB....

Guy named Micheal came with 3 others . Two mowed. Two sat on truck. I asked if they could blow the driveway. He said yes. They left without blowing driveway. I am glad that they came on short notice.

I had high expectations as this estimate was not the lowest by a long shot. They were on-time, however as they got started, I noticed that the work they were doing was not exactly what we discussed. I had to leave to go out of town while the work was still being completed so my husband was not aware that much of the work they said was completed had not been done. When I returned I was disappointed to see that there were still items in the back yard that had not been hauled off, the leaves were not all removed, there were still weeds, and it did not have the "cleaned-up" look I was hoping for. They even many bricks lying around. The front yard looked a lot better with some exceptions. The front area where our mailbox was had mulch adding but it was totally a mess. It was not edged so the mulch was lopsided and falling out. There was ivy and weeds still in the front and plant border they created still had leaves stuck under the dirt. When they called to get the last half of payment, I sent them pictures of the work and told them I was not happy as it did not appear finished. Kevin did agree to come back the next day and he agreed that there were many things that needed to be fixed. He did send a team out to come and re-do most of the unfinished work. The other thing I found strange is that they did not tell me they were not going to grind the stumps. With the cost being over 3K (closer to 3400), I was not going to pay additional money to have that done. They also left a sheet of plastic sticking up from the ground in the back. It looked horrible and he sent someone out to remove it. I have since done many things, such as till the garden area and plant some colorful perennials, annuals, and have thinned out the lilies and re-planted the over crowed daffodils and that has greatly improved the curb appeal. I guess I am still surprised that those things that I have done that have made a huge difference were not suggested or included. In the future we will have more work that we will hire a landscaper for but it will not be with this company. I wish I would have read the review prior to hiring them!

Description of Work
Originally contacted for a full yard clean-up as we had recently moved into our home and it has been vacant for a year. The response time was good and after inquiring online Kevin reached out to me and we set up a time for an estimate for the same week. Kevin and he wife came over, on-time and did a walk-thru with me. I asked for some idea and the they sounded like they knew what they were doing. They proposed some idea that sounded like a great ideas and they said they could install a gate as well to keep our dog fenced in. They weeded, leaf blowing, and some trash removal from the back yard. Our back yard has a lot of brick for paths and many of them were lose so I asked them to either re-stack or move them all to one area. They were supposed to remove ivy in the front and back, in addition they removed a few small trees and bushes. Then they added some soil in the front and a few bags of mulch. I had them create a path using existing plants in the front.

Ms. [Member Name Removed] We here at A Sharper Image Inc. pride ourselves on our superior customer service, as you have mentioned our responsiveness to your situation. However, regarding your project... We initially quoted your project, recommending the needed services to give you your desired outcome and appearance. Unfortunately there were several items removed from our recommendations, forcing us to revise our quote to you not only once, but twice. The stump grindings that you have mentioned were supposed to be used as mulch as the invoice stated, and never were supposed to be removed. As far as the items that were considered trash... You stated that any items that we did not know were trash or things you wanted to keep, you were supposed to go thru and let me know what was trash and what we were to keep. As far as the plastic that was under the soil, nowhere in the original proposal did it say to remove plastic under a foot of soil. My plans were to cut the existing plastic even with the ground, and not to dig out any unseen plastic. The pine needles that we originally recommended, you requested that they be removed from your estimate, as the new pine needles were supposed to cover any of those imperfections. It is an unfortunate situation that you were not completely satisfied with the appearance of the project upon your return. However, the pictures you have posted here don't tell the full story, as we were not 100% completed prior to you taking the photos. I mentioned to you that we still had a punch list to complete, as is the case with most jobs when you are wrapping them up. As you stated: "Kevin came back out immediately..." and we addressed any\all of your concerns, completing the project to your satisfaction and receiving final payment for the job. If at any time you were not 100% satisfied with our work, why then would you not have not retained final payment? Because here at a Sharper Image Inc., all of our projects and payment terms state that final payment is not due until satisfactory completion of job. Again..., we apologize that you were not 100% satisfied with our work. However, in the future if there are any concerns (such as these) please address them directly to me the owner (Kevin Kirkman) before making final payment. We pride ourselves on our customer service and quality of workmanship, and we always want to ensure that every customer is 100% satisfied. Please give me a call if you have any questions at 336-708-0477, I would be happy to address any concerns you may have. Thank You Sincerely, Kevin Kirkman A Sharper Image Inc.

interactions with this company have ranged from average at best, with inconsistent pricing, to low quality of service and over sight of work. This company has been on an as needed basis for mowing and seasonal services since my move into GSO. from the beginning i felt as if they were trying to lock me into an annual contract rather than executing a solid job. I initially informed them that I wanted to engage this company as needed until i felt confident enough in the quality before I committed to any long term obligation. Through the summer, they were responsive enough per my calls to mow. My expectation for a mow, edge, blow shavings would also include small sticks that fall in yard (rather than mowing over them spreading across my lawn). also blowing leaves off my patio was into natural area and grass (rather than actually removing the leaves). It was disheartening that small branches and sticks were simply mowed over rather than taking extra minute to walk and pick them up out of my yard. leaves were simply sent into my natural areas, or scattered in the street in front of my house. most recently the minimal quality oversight and follow through of work has me seeking other lawn care providers.

They kept changing foreman. The foreman became very difficult to work with. we didn't have anything to do with him, but we went out one day asking about mulch and would never get anywhere with it. You couldn't get through to the office. If you dial the number, you always got the owner. When I asked about the mulch, they said I was yelling at them and that I said that I was going to report them to the BBB. They terminated my contract and told me that I wouldn't owe anything, but charged me $240 two weeks after the contract was terminated.

Description of Work
They cleared off a portion of our yard that was in the woods near a creek. They did a good job and we liked their foreman. We then hired them as a landscaper on a year contract.

Our professional roofers are top-notch and committed to serving you in a timely manner, with quality craftsmanship, and commitment to 5Star customer service excellence. Redemption Roofing Company is experienced and certified to install products by GAF, IKO, OWNES CERTAINTEED, MALARKEY ROODING PRODUCTS, LOMANCO, CORNING AND TAMKO. No matter how your property was built or what your design preferences are, we will provide a customized solution. Were here for you!  …

A Sharper Image Complete Home Care Inc. is currently rated 2.5 overall out of 5.

No, A Sharper Image Complete Home Care Inc. does not offer a senior discount.

Are there any services A Sharper Image Complete Home Care Inc. does not offer?