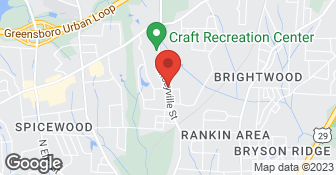 Residential reroofing and new construction some wood repair and gutters We do not subcontract our roofing work. Our company has been a BBB accredited member for over 25 years. Large carpentry repairs will be performed by a reputable contractor. We also work on flat roofs. We will work with your insurance Co on any wind or hail damage to help solve your issues....

Every step in the process went well. Al responded to my initial call promptly and got me an estimate. After I decided to work with him, he brought shingle samples so I could choose a color. When I couldn't decide from the small samples on the sample board, he brought a handful of each of the colors I was considering and nailed them to the roof so I could better see how each color would look in place and at different times of day. After I picked a color, he worked with me to accommodate my schedule as I was out of town for a few days and wanted to be home when the job was being done. We also had to work around some rain, but he always kept me updated on the schedule and plans. The job took two days. The crew arrived exactly when I was promised and was completely professional during the job. They cleaned up the debris thoroughly so that the yard and area around the house looks like it did before they came. I am very pleased with the result and highly recommend Corman Roofing.

After looking at the various roofers in Greensboro and their websites and their BBB rating, I decided on this one. The website is professionally done, unlike many roofers' sites. The length of time in business was another factor in my decision to recommend this roofer to my GC. Two weeks ago, my GC contacted this roofer's answering service (note, it's an answering service not an employee as I believe they don't have any employees other than the "owner"). After waiting 1 week for a callback, the GC contacted me and said he, Mr. A.L. Corman, didn't return their call. This was an excellent time for Mr. Corman to establish a relationship with a General Contractor which could lead to more business for him. He's been in the business long enough to know that GC's can be the lifeblood of a sub-contractor such as himself. I asked the GC to try once more. After another week of no call back, I told the GC I would call him. I called him 2 days ago and left a message with the answering service person that I wanted a quote on a new roof. I told them that my GC tried to contact him and they received no response. I thought surely, that would make him call me as he has now received 3 calls for a quote. I've received no response from him. I read the Angie's List reviews AFTER my recommendation to the GC. I should have read them before I recommended him as there are a number of reviews from others that said he was unresponsive to calls. He's blamed "health" for not returning calls and so forth. If one is sick, he should instruct his answering service to let the caller know that he isn't available for jobs. I left a message saying the following "If you are unable to give me a quote or do a job because of sickness or your backlog of jobs is too high at the moment, please let me know and I'll find another contractor, no problem". Still no response. I would not recommend this "contractor". If he won't respond to a General Contractor, whom called twice, or the actual homeowner after a 3rd call, he's unreliable in my opinion. Mr. Forman states he did call the contractor and didn't want to get involved in a dispute? There was no dispute. The roof just needed to be repaired from an improper flashing around an exhaust vent. Everyone agreed it wasn't done properly. That is still no reason not to return a call after I recommended you. Honesty is always the best policy. If you don't want to do a job just tell them, don't leave them hanging waiting on you to return a call. Update: 4/35/2015 The company that was the General Contractor whom Mr. Corman took their word against mine, is now being sued by the Attorney General of North Carolina. If you Google "American Kitchen Corporation, North Carolina" you'll find that dozens of homeowners were taken for thousands of dollars. Mr. Corman shouldn't be so quick to dismiss potential customers because of the words of a faulty GC now under prosecution.

Sorry, someone else had done some work for this individual/contractor and had installed things improperly, I did call the contractor and after talking to her I decided not to get in the middle of a dispute.
5.0

Initially had trouble getting a quote. However, work started exactly as scheduled and was completed in less than a week. Mr. Corman kept us well informed during the project, and they cleaned up thoroughly when done. The price wasn't the lowest, but Mr. Corman seemed to be the most knowledgeable of the three roofers we spoke with.

Thank you, I'll try to be more responsive. I'm glad though you were pleased with the job.
5.0

The crew arrived promptly and completed roofing in one day despite sporadic rain. He was flexible and understanding when health issues became an issue. Highly recommend this company.

Description of Work
He put a new roof on our house.

I called and left information with the answering service and Al returned my call that evening. Al made time to get over to the house the next morning to survey the damages and provided a verbal estimate to make repairs . His price turned out to be higher than one of his competitors who I also felt good about dealing with so I did not give A.L.Corman the work.

Mr. Corman was recommended to us by a friend who had contracted with them for a technically difficult roofing job on a remodeling job. We called for an estimate on our Summerfield, NC house where the 20-year-old roof was beginning to leak. Mr. Corman provided a very competitive bid, was really helpful in helping us choose the roofing material, and he replaced sheeting where needed. This job was done promptly in early 2012. Following that positive experience with Mr. Corman, we contracted with him to replace a former shake shingle roof on our mountain house in Caldwell County. Again, the work was competitively priced, promptly completed and of excellent quality.

Description of Work
AL Corman Roofing actually did two roof jobs for us this year. The first was on our primary home in Greensboro, and the work he did was excellent. After such a good experience with Mr. Corman on that house, we also contracted with him to completely replace a roof on our mountain house in Caldwell County. Again the work was superior and the service very top notch.

I called twice and left a message with a receptionist who informed me that the owner would have to return my call about getting an estimate. Nobody ever returned my call....I have decided to use another contractor. Probably for the best.

Description of Work
No service was ever performed.

More than a year ago, I called them for a re-roofing estimate. They did not return my call. Then I put off the roofing job for some time. This year (May 2012) when I was ready to hire someone, I saw Corman on Angie's List. I forgot that I had called them last time. I called them for an estimate and was told by a woman that someone would call me back to set up an appointment. No one ever called me back this time either. I ended up using another company on Angie's List to do my roof. Would not recommend the customer service of Corman.

Description of Work
I called for someone to come out and give me an estimate on re-roofing my house. No work performed.

I'm sorry if I didn't respond to your request. I'm a small company and I sometimes get overwhelmed with calls. I hope that you can understand this. I can assure you though I'll make more effort to respond. Unfortunatly I was in a bad situation in May with a torn biceps tendon which put me to a halt. I've had surgery and on the mend hope you had good luck with your roofer. Thanhs for calling me.
5.0

When I called back the next day, the answering service said he was on medical leave. I told her that she should have told me that on my original call. However, later that day Mr. Corman did call me, but I told him I had made other arrangements. He was very apologetic and told he was on medical leave, recovering from surgery. He said his answering service should have told me that from the start. He was very professional and offered to come inspect the repair to be sure it was done correctly. I told him I appreciated his offer, but that it wouldn't be necessary. I felt that he was very professional - and an honest man that I would not hesitate to use in the future.

Description of Work
I called this roofer for an estimate to repair a leak at my home. His answering service said they would ask him to call me.

Very pleased with the whole process, Mr Corman was easy to work with and kept me updated via phone and emailed photos when requested.

Description of Work
New roof and as previous flashing was not put installed properly, it had to be replaced .

Gutter Guards America is committed to keeping homeowners off the ladder with America's best maintenance-free gutter guard, backed by quality installation and customer service. Our patented, award-winning design captures more water than other micro-mesh gutter guard systems. We fit our gutter guards over your existing gutters to eliminate leaf and debris build up, allowing your gutters to do their job and keep rainwater away from your foundation. We also install new seamless aluminum gutters if you need them. Made in the USA by the manufacturer of the #1 gutter guard, our gutter guards come with a lifetime transferable warranty and a no clog guarantee. You will have peace of mind knowing your gutters are protected against clogs for the lifetime of the home. And with 0% same as cash financing options, it’s never been easier to protect your entire home with Gutter Guards America. If you are tired of cleaning out your gutters, give us a call for a free no obligation estimate. The knowledgeable and professional representatives at Gutter Guards America provide free, in-home, no obligation estimates tailored to your unique needs. Call to schedule your free, zero obligation gutter guard estimate today, to eliminate gutter cleaning and say goodbye to ladders forever! Call Gutter Guards America at (800) 292-4951 to save 15% on your gutter guard install. We also offer a 10% senior and military discount.  …

How is A L Corman Roofing Inc overall rated?

A L Corman Roofing Inc is currently rated 4.8 overall out of 5.

What days are A L Corman Roofing Inc open?

What payment options does A L Corman Roofing Inc provide

Does A L Corman Roofing Inc offer a senior discount?

No, A L Corman Roofing Inc does not offer a senior discount.

Are warranties offered by A L Corman Roofing Inc?

What services does A L Corman Roofing Inc offer?

Are there any services A L Corman Roofing Inc does not offer?