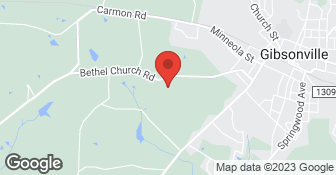 We are a full service masonry contractor. We do all things masonry...brick-block-stone-precast-pavers-fireplaces-repairs-patios-walks-fences-retaining walls,etc. We usually employ from 4 to 10 people depending upon work load. All jobs are priced individually. We have been in business since 1987 with the bulk of our work being done in Guilford and Alamance counties and can provide many references....

Here at DM Outdoor Solutions we thrive off of the smallest details. We are a small and locally owned company with big aspirations. We love our community and the people in it. We look forward to any job and any opportunity.  …

A Plus Landscaping & Maintenance

A Plus Landscaping and Maintenance is a family owned and operated company that started in 2010 by Michael Sanford. We provide an excellent quality of landscape needs, from mowing, to pruning, and designs for a reasonable price. With college degrees in Turf Management and Landscape Construction, we have had field experience since 2007. We believe in our quality of work, and would like a chance to show you what we are all about!  …

Locally owned and operated family Hardscaping company servicing the Winston Salem area since 2012. We specialize in new stone hardscape installations. We pride ourselves on providing the highest quality and commitment to 100% customer satisfaction on every job. Call Martin for a free estimate. We look forward to hearing from you to beautify your landscape.  …

It's very clear that Keith cares about the work he and his crew does. We had a lot of repointing work needed on our house due to deteriorating mortar (the entire top of a 40 foot retaining wall, 4 sets of brick stairs, and other miscellaneous spots around the perimeter of the house). My two biggest concerns going into this project were making sure the new mortar matched the old and that the new mortar stayed off the front of the bricks. Keith and his crew meticulously repointed everything so that the mortar matches very close and the bricks are clean. They definitely exceeded my expectations and I appreciate the amount of time and care taken to do a great job. Keith is responsive, diligent, thorough, careful, and caring about the work he does. He is incredibly knowledgeable and is happy to give advice regarding your masonry. Even if he has a number of jobs lined up after yours, he will take the time to do yours right instead of rushing out as fast as possible to the next big gig. We have some more masonry projects we plan to do, and Keith will be our man. Thank you, Keith.

Description of Work
Repointing 4 sets of stairs (~25% of mortar), repointing the top of a 40 foot retaining wall (100% of mortar), adding a mortar wash above a soldier row, and general repointing around our house

Excellent job. He is neat and on time.

This is an unbiased review on Keith E. Moseley. I am in the midst of a corporate relocation as part of a job move. My house in Cary, NC was inspected as part of the corporate relo. They picked up a phenomenon called efflorescence (mineral deposit) on a cinder block wall and as a consequence I was asked by the relocation folks to basically remove some of the external stone fascia and install a moisture barrier then refix the stones to fix the "moisture problem". I reached out to a bunch of stone mason's including Keith. He got back to me promptly. I basically sent him the inspection report and didn't pay him a dime. I asked him if he thought it was worth removing the stones, install the barrier and would that actually remediate the supposed problem. After looking over the report he noted that there wasn't really a problem which I also happened to believe as the moisture levels in the stone after a recent 2inches of heavy rain were low. His opinion - just wipe the efflorescence off and leave it alone; the stonework involved would likely do more harm than good, wouldn't actually prevent efflorescence, bump the bottom stones out and might cause a mismatch in stone color. I was mightily impressed with his unbiased opinion provided free. Where do you get service like that? I am sometimes in two minds about my Angie's List subscription but an opinion like Keith's is well worth the price. He provided this service for free and to me makes him highly credible and a consummate professional. Keith - a big thank-you (whatever happens with my relo!) I hope others will look to make use of your wisdom and stone masonry skills....Your unbiased opinion is greatly appreciated. Pallav A. Bulsara.

Description of Work
Repaired masonry on the side of my house.

I read all the pros and cons from other Angie's list users and was a little concerned about calling/using him. However I do know that you cannot always please everyone all of the time so I decided to give him a chance. I called and we made an appointment for him to come and give the estimate. He cancelled claiming he got tied up with another customer and wanted to finish the job he was working on. It happens...not a problem...we rescheduled. As the next appointment approached, he cancelled...claimed some employees didn't show up. Ok, it happens, we rescheduled....but now I'm a little concerned and skeptical. The day of the 3rd appointment approaches.....you guess it! He cancelled! Said he had to meet a truck. I told him than this was the third appointment he cancelled and that this was very poor business practices, and if he cancelled the estimate so many times how do I know he would ever show up to actually do the job if I hired him. He said if I insisted he would try to move then truck delivery but it would really be an inconvenience and be difficult to do, so....yes, we rescheduled for the following Saturday morning. Saturday morning he showed up on time. He told me at that time that he came to my house directly from spending the night in a hospital, he even had the hospital bracelet still on his wrist. But he said how important it was to him to get to me to give the estimate. We discussed what I needed done, he measured and said he would email me the estimate in a couple of days. I received the estimate timely as promised. The estimate was well over $2,500.00 higher that the other 4 estimates to received. Needless to say between the unreasonably high estimate and my concerns in his inability to show up regularly to complete a fairly good sized job and his abundance of excuses, we chose to use another mason for our work.

Description of Work
We wanted an estimate for the cost of installing pavers on our walkway and on our front porch.

I am sorry you are so unhappy with our contact, however the comments are far from true. I only ASKED if it would be a problem to reschedule 1 TIME, and said I would honor our original appointment time if need be. There were not 3 appointments EVER. [member name removed] AND husband were extremely rude to me from first contact. If I wasn't worried about getting a negative review, I would have never even looked at the job after being talked to "like a dog" durring first phone call. Some of the comments are correct, most are not. I respect and value ALL potential customers, and do not want to seem abrasive, but I can not apoligize for things that never happened.I was as prompt and professional as possible. This review is WAY out of line. [member name removed] should think about the damage her lies can cause. If anything ,she should correct the description of how things went. I have 26 years in business and find it hard to believe that others could trim $2500 from a quote of $4940 (option 1) $6389 (option 2) and actually complete the project nicely! Keep in mind, we who contract talk among ourselves and have a good grip on what the "going rates" are. I am not the Idiot nor scheister that [member name removed] wants everyone to think I am, and refuse to take that crap.
5.0

It went amazingly well. Keith delivers exactly what he says he will. The steps look amazing. Definitely makes a positive change to the look of the units. Thanks Keith!

The experience was wonderful. Keith took the time to understand exactly what I wanted. He made great suggestions based on his experience which were spot-on. He identified a drainage issue that would be caused before work began and immediately offered how he would solve the problem. He also worked with me to get to a price I felt comfortable with. He and his crew showed up every day for a week on time and ready to work. Yes, he was there the whole time! They worked efficiently yet with great craftsmanship. Often I would see him sharing his knowledge and artistry, showing his workers how to cut brick and mortar joints to achieve the best look and the highest quality outcome. He is a real craftsman! They cleaned up beautifully afterward. The yard was left in a great shape. The only disturbed what they absolutely had to and made sure things were in place and cleaned afterward. I've had quite a bit of landscaping work done in the past, and I have to say this is the best experience I've had so far. I never felt pushed into something I didn't want. I never felt like I had to and quot;superviseand quot; them to make sure they stayed with the plan or did the job right. Keith made sure of that! Overall it was actually a nice, relaxing experience for me. Loved the service. Loved the experience. Love the outcome!

Keith had previously replaced the steps outside of one of my rental units. I called on him to do the second unit. It looks awesome! He does such a good job, that he is also going to be called on to replace my other unit's steps. Keep up the good work.

Description of Work
Repaired/replaced a second set of brick steps outside my rental unit.

Was very helpful, courteous, fair price and was very willing to work around my personal schedule.

Description of Work
Ripped down stone on my chimney so a roofer could repair damage, and put the stone back up. Also water sealed the stone.

This was a small job to add a row of bricks to a step to make it safer and easier to enter our home. Mr. Moseley stopped by to take a look. He was very nice and courteous and seemed interested, but we never heard from him again. In October, we called another brick mason from the Yellow Pages, and he did the job quickly and well.

Description of Work
The job was not done.

Sorry. Very small job, got forgotten in the mix. I was going to do it when we were close by, so it could be really cheap, but it slipped my mind.

brick, block, stone installation and repairs. Patios, walks, privacy fence, retaining walls (masonry and interlocking) Fireplaces - indoor and outdoor. ALL masonry from small repairs to medium commercial. We specialize in the things that not "just any brick layer" can do !