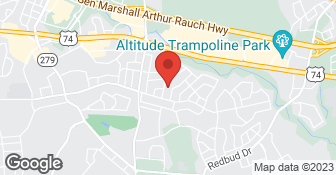 He came over to take a look at it. I had some water leaking down the chimney. We were not sure where it was coming from. He went up on the roof and looked at everything and basically said it was my chimney cap. They came out and they measures. They built a stainless steel chimney cap for my roof. Then they came back out and installed. He told me that after they finished the roofing, that he would come back out and check the new flashing around the chimney and make there were no issues, which he did. He went up there and looked at it and said the roofing company did exact what they were suppose to and there was nothing else for him to do. I was afraid it was going to be a really big bill and it was not.

Description of Work
They provided an estimate for a chimney cap.

He was very knowledgeable. He was an absolute delight.They had the chimney cap ready by the beginning of the next week. They were going to have build one. They had some out and install it. It was exactly what was estimated. I was so pleasantly surprised.

Description of Work
They measured and built a stainless steel cap for the chimney to prevent water leakage.

I spoke with Bob on the phone. I indicated I thought the price was kind of high, but he sold me on the fact that he was certified, and he would do a good job for me. So I was surprised when another man, not Bob, showed up for the job. Even though I was disappointed that he had passed the job off to someone else I figured that he would make sure whoever he sent did a good job. The gentleman was on time. He pulled the wood stove aside and put the vacuum into the chimney. He also went up onto the roof and checked the chimney. He told us that the inside was cracked, and he suggested we get an insert. He said Bob would have to give the price for the estimate. Twice I called him and asked for a price on the estimate. Twice he said he had to talk to his guy and call me back. He never did call me back. I totally believed his estimate, so I was frustrated because I wanted to finish repairing my chimney so we could start using it. After waiting and him not calling me back I contacted another chimney sweep company. The second chimney sweep company came to the house to give me an inspection to give their own quote as to what they would charge to do the repairs. The second chimney sweep person told me that there was not anything wrong with my chimney, and he showed me where the chimney had not been completely cleaned. He cleaned it for me at no additional cost. I had paid Mr. Davis $329.00 for inspection and cleaning of my chimney, and it was not completely cleaned. Also, his worker told me that work needed to be done that did not need to be done. Finally, he never followed up with me when I called him. I am very disappointed because I had trusted him, and I feel he overcharged me for a job that was not completely done.

Description of Work
I needed an inspection can cleaning of my chimney.

Excellent service. Couldn't have been better.

Description of Work
Needed a new cap for the chimney. Also needed to replace fireplace lining due to several cracks. This guy really knows chimneys and will do a good job inspecting, cleaning and educating.

All Out Chimney Sweep LLC

We have National CSIA Credentials and keep up to date with trade trends to increase the quality of our service. We are members of professional trade organizations such as CSIA (Chimney Sweep Institute of America), NC and SC Chimney Sweep Association and the BBB of Charlotte in good standing with an A+ rating. We have been in business since 1983 and put customer satisfaction as our primary concern. We expect payment due at the time of service unless other arrangements have been agreed upon in writing by both parties (emails are an accpetable form).  …

All statements concerning insurance, licenses, and bonds are informational only, and are self-reported. Since insurance, licenses and bonds can expire and can be cancelled, homeowners should always check such information for themselves.To find more licensing information for your state, visit our Find Licensing Requirements page.
General Information
Free Estimates
No
Eco-Friendly Accreditations
No
Senior Discount
No
Warranties
No

Bob Davis Chimney & Fireplace is currently rated 4.3 overall out of 5.

No, Bob Davis Chimney & Fireplace does not offer eco-friendly accreditations.

No, Bob Davis Chimney & Fireplace does not offer a senior discount.

No, Bob Davis Chimney & Fireplace does not offer warranties.