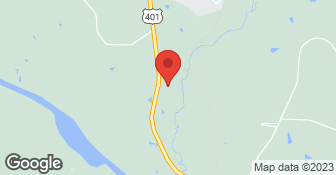 It is just one guy, and he always answers his phone. If he can't, he will call you back. He knows what he is doing. I don't feel like I'm being ripped off. He's very professional. We have been using him for awhile.

Description of Work
They installed a new hot water heater.

About a year later the pump failed again. This time it was the electrical copper wires going to the pump. We had no water one morning while getting the kids ready for school. Plumbing Solutions came out the same day I called, and found the problem. Since the wire was installed by them a year earlier, I was expecting them to do the repair work at least at a discount. Wayne Edwards stated the wires were faulty due to a splicing problem at the factory, and showed me the place where the wire was cleanly broken. I do credit him for responding quickly, finding the problem quickly, and making the necessary repair. I am unhappy that I was out another $600 for something that was defective. Wayne Edwards was sympathetic but unmoved to give me a price break. Still, he does very good work and is always very responsive. For those reasons alone I certainly would hire him again, but will keep all the warranty paperwork in a safe place next time.

Description of Work
They replaced bad well pump, and replaced electrical wires to pump for me in 2008. Almost exactly a year later, the pump failed again due to bad electrical wiring.

wayne has worked for me before . i have been in const. business all my working life i am now retired and know enough about plumbing to know what i can and cannot do this was a job for someone who is a Pro . wayne is that gave me estimated time of arrival [not sure how long on current job this is very normal for a small shop like wayne 's ] small shoppes usually have lower prices [less overhead ,etc.] he called when on way very close to estimated time he gave me has nice truck clean and he also looks like a plber not to dirty but dirty enough to see he has been working with some tools. Very pleasant and polite got right to work approx 3 hours from start to finish . Kept everything nice and clean and disposal workng just fine also hot water heater and some other minor pblg he has done over the last couple of years. he even gave me a senor discount. i would not be afraid to recommend plumbing solutions to anyone.feel free to call me at 919 388 3637 if you want more info on wayne and plumbing solutions i live in Cary and wayne is about 20 miles from me not sure how far he is willing to travel for a project i am glad i found him [not thru angie's but from my appliance guy before i joined angie's. wayne has done inside and outside work for me . did fine on both.

Description of Work
installed a garbage disposal that i provided

I have called on Wayne many times over the years for various plumbing jobs. He is always responds quickly, is courteous, and does a very good job. Prices are competitive.

They were very good and very nice. They were outstanding. It was a weekend and they came right away because we had an emergency. They were on time.

Description of Work
Plumbing Solutions of NC repaired the wires behind my stove.

No problem was found with the pump after leaving it running for 10 minutes and the fireplace was functioning as it should. Evidently soot found on the logs is normal for this type of gas log. Mr. Edwards was very honest and did not do any repairs that were not needed. We have used him in the past and always found him to be very honest. Any work he has done has always been top quality. He has installed several sets of new faucets for us in the past as well. In the past he also has fixed a problem that another plumber had failed to fix correctly with our kitchen faucet. That plumber was supplied by the company who installed our granite countertops. I wish I had called Plumbing Solutions instead.

Description of Work
Mr. Edwards was hesitant to come when I described the problem that has been reported by a home inspection company. We have just sold our house and the company reported a problem with gas logs in the fireplace. Mr. Edwards said that what they reported was normal with our type of gas logs, but he would come out to check the gas pressure and function if we wished. Since the inspection report also indicated that the pump on our jacuzzi was leaking we asked him to check the gas logs when he looked at the pump.

Description of Work
They came out to repair a leak in my kitchen faucet. He replaced the faucet and fixed the pipes underneath.

They are excellent. They are always on time; if they tell me they will be there, they are there. As far as I am concerned I feel their pricing is very compatible; I don't have a problem with the price if they come in and do the work right. I would use them again in the future if I needed to.

Description of Work
I have used Plumbing Solutions of NC Inc. They last came out to fix some problems I was having with my pressure tank.

Great service! We would use Plumbing Solutions again without any hesitation.

Description of Work
We replaced two faucets, a bathtub overflow cover and a tub drain hole closure. We also had Mr. Edwards check our hot water heater that had been releasing water through the pressure release valve in small amounts for the past two weeks. He diagnosed the problem easily as a pressure reducing valve in our crawl space and added a ball value that was apparently missing. I also had him look at our kitchen faucet that had been installed by another plumber as part of a granite installation in our kitchen. I had had that plumber back when the hot water pressure wasn't as strong as the cold. He fixed a valve and evidently got some rubber in the line that was partially blocking the flow. Mr. Edwards diagnosed this problem left by the other plumber easily and corrected it. We had had work done by Mr. Edwards about two years ago when he moved and installed three faucets for us when our bath faucets were replaced by Delta because of a defect. We would have chosen him for the kitchen faucet, but the granite installer urged us to use their plumber since he was familar with their installation process. Now, I wish we had had Plumbing Solutions do the work. The work area was cleaned up completely and we think the price was very reasonable. There is no doubt that we will use them again if we have a plumbing need.

The gentleman who took the call for the request called me back promptly and scheduled the work for early the next day. The plumber called me early am on the day of arrival to give me an arrival time. Arrived on time , did the work in a professional manner and cleaned up his area . He also tightened a loose household kitchen single handle faucet packing. He completed all the work in about 30-40 minutes and gave me a card for a restoration service pending what my gen. contractor found when he cut out more damp drywall. I would definitely use this company again. Although I felt that the cost was a little high , they came out quickly and fixed the problem where other companies could only say it may be 3 or 4 days till they could come out. The leak was active and needed immediate attention. I would most definitely use the company again and refer others to them.

Description of Work
We had a leak inside a garage wall. The plumber came out and cut into the wall located the leak replaced the piece of cold water supply line where a trim nail had punctured the line at the time of original construction. He turned the water back on and checked for any leaking and all was fine. Unusual thing was that the home was 9 years old and the leak only appeared this year. . Apparently the line didn't leak until the trim nail rusted . It took me about 7 days to get a plumbing company that was available to come out ASAP.