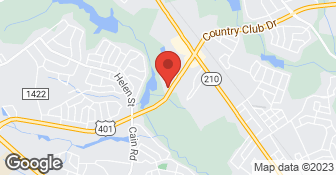 We know it’s tough to find a home services contractor you can trust. With over six decades of experience, Blanton’s is a Fayetteville mainstay. Known for our professional approach, quality products. and guaranteed workmanship, we’re proud to offer heating, cooling, plumbing and electric solutions that knock your socks off....

We're Carolina Power & Generators, Inc. The Generator Guys! Specializing in whole-home generators FIRST! Our friendly experts can help you find the right generator, install it, maintain it and make any necessary repairs. We specialize in whole-home standby generators and guarantee quality, affordability and convenience. Also, unlike other companies, we only send out trusted FACTORY TRAINED and CERTIFIED technicians.  …

Family owned and operated with over 20 years of installation and service experience in the HVAC field.  …

Carolina Comfort Air is the premier HVAC & Heating company serving Raleigh, Fayetteville, Jacksonville, Wilmington, and surrounding areas. We have Trane certified experts ready to repair, install, and maintain your heating & cooling systems. Call and ask about our special financing deals and ongoing coupons! -Top National Trane Dealer -Google Guaranteed -NATE Certified -A+ BBB Accredited Business -35,000+ Systems Installed In 2007, Carolina Comfort Air opened its doors in Smithfield, NC with founders Phillip Tyler and Hank Richard at the helm. The company has grown from the original 5 to almost 300 team members within a few short years. Since 2007 we have built a new base of operations in Clayton, a team of HVAC specialists and expanded our service area with additional locations! Carolina Comfort Air specializes in HVAC service, installation & maintenance for single-family and multifamily homes as well as commercial applications. Our focus is to be your full-service heating and air contractor.  …

Service was very good and they made sure that the air conditioning works for the whole year. Their pricing was a bit high, but they got the cleaning was great.

The job was done very well. The representative was professional and took the time to clean up any material related to the repair.

Description of Work
Vent was replaced in the bathroom.

They have been excellent and I would highly recommend them.

Description of Work
I have been using them for servicing my HVAC system for years.

The options were very expensive + I was told that I needed a new water heater back in August I believe + still have the same 1 now in March. What is sad about trying 2 rip somebody off is my husband is a disabled veteran. Thumbs down 2 Blanton's!!

They're very reliable and pleasant to talk to on the phone. They're a great firm. They're open after hours and don't charge extra which is really great for people who work normal business hours. I would recommend them to anyone. I won't call anyone else.

Description of Work
Recently, they installed a hot water heater. I've been using them for the past 13 years. They've also installed my Air Conditioning unit as well as several other things over the years.

Best service I've ever had done on my unit was just performed by Beau. I'll be looking to Blanton's when it comes time to replace my unit. Great folks to work with.

All went well. The crew had to return for a second day, and the jobs were completed to my satisfaction.

I am one of Blanton's Gold Members which I pre-paid their annual feel several weeks ago when I had a hot water heater that was over 17-years old replaced and all services related to that situation went A+. I had a separate Blanton's appointment to have my HVAC system checked for the first time today and reported the plumbing issue to the dispatcher who told me someone else would have to call me and set up a different time and to wait on that person's call. I waited a little over 24 hours with the faucet still slightly dripping and called this morning to report I did not want to go through the weekend if possible if the faucet was still dripping in case it became an emergency. Two men showed up at my door after calling that they could come early and I authorized their coming early. They both looked at the tub and shower and asked questions about what I wanted replaced. I replied I didn't want a new faucet, etc., just the leak stopped. I was given a quote (Estimate 37873717) that it would cost $239.06 to have the work done. I trusted this company from previous experiences that the work that needed to be done on the Delta faucet would cost that much in parts and labor. When I was told the work had been completed in less than 30 minutes, I was a bit flabbergasted and asked to see what was wrong. One of the plumbers produced the parts to the $10 kit I've used in years past to repaid Delta Faucets having no idea, that was all that was wrong with the shower/faucet to keep it from leaking. I paid the Invoice 3779765 via Bankcard for the full $239.06, looked up the kit online after the plumbers left and called around two to various plumbing shops to come up with the retail kit that sells for $10 in most reputable plumbing shops. When the HVAC person came out, I was still upset with the plumbers. I'm confused being a Gold Member of Blanton's "family" and the explanation that some services regardless of the Parts pricings and the labor are all factored in as one job regardless of the time required to complete the job or costs of parts, when other Blanton services require you to pay at least half up front for parts they expect to have to use when they order them. This certainly did not occur with my hot water heater installation and I was told that I had the guarantee (which I believe I paid extra even as a Gold member for ten years on the hot water heater) and "no guarantees" for the $10 Delta Faucet kit that I paid $239.06 for. When I asked how much this would have cost had I not been a Gold member, I was told it would be roughly more than $100 than the $239.06. While I'm not upset with all of Blanton's services, I don't want these two guys back in my house or on my property ever again and still do not know the names of who came out. Neither do I wish to hear from anyone associated with Blanton's management further about this. When a company does this to a -connected veteran, heaven help our wives with these kinds of negotiations when we die?

Description of Work
I purchased a new shower head and installed it myself. The shower head worked fine but discovered that the Delta Faucet was leaking for some reason. I didn't know whether this had to do with my "do it yourself" shower head installation or some other reason. It ended up that the Faucet needed a repair kit which such types of faucets need from time-to-time which retails here in Fayetteville, NC for $10 or less.

They lie to me, they told me a nedded a new coil for my unit, it was going to cost $3987 parts and labor, when we advise that the unit was under warranty with the manufacture they lie to us, they told us they call the manufacture and that the unit was not register so it wasn't under warranty. I call the manufacture the next day and I was told that they never call and the coil was under warranty. I call Blantos back and complaint and I was told more lies. They call me back and said they will find out what happen and return the call. Since July 7 I am still waiting for the call back. I call few more times and nothing has happen yet. I got my unit fix by another company for less than 1000 and the got the coil from the manufacture for free

It was excellent. I have been using them for years and I continue to use them to maintain this system and another system I have at a house across town.