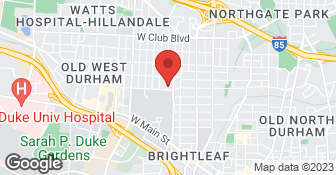 HomeGrown Landscapes is a full-service landscaping company that specializes in everything from Retaining walls, Foundation Repair and Custom Irrigation. At HomeGrown Landscapes we offer discounts for medical employees, service members, teachers and angies list referals. Feel free to give us a call for a free estimate thanks Jacob 919.616.2315 jacob@hglaonline.com...

painting for residential and commercial houses  …

Absolutely fabulous job! I was referred to Ms. Amanda by a friend and her work was amazing. She arrived promptly and provided a free estimate and suggested great options for our problem. She quickly emailed me a price breakdown and gave us great options for our budget. We were out of town the day of installation but she texted us photos to ensure that the placement was as we discussed. Her advice and price were great and much cheaper than the 2 other estimates we received and her work was a third of one of the "landscaper" who couldn't even give us the name of the plant he wanted to put in our yard to form the desired hedge. Can't say enough great things about this dedicated professional! Will use her for all landscaping i future and recommended in our cmty newsletter. Hire her you won't be disappointed!

Description of Work
trim back crape myrtles and planted 10 hedge and 3 hibiscus.

Jacob is probably okay for small jobs (building a patio, mulching a bed, etc) but should not be running large projects. The bulk of the work involved buried drain pipes, so its hard to tell if that was done correctly, although aside from the stone path the rest of the visible work was very disappointing. He said the project would take 2 weeks, but after taking down our fence and digging up the yard, it took him 6 more weeks to finish the job. He would show up one day with a couple guys and say he would be finishing up today or tomorrow, then disappear for a few days without notice. He also kept trying to sell more services whenever we talked to him, despite not having completed the current requests. In the end he charged us a shocking 30% above any written estimate, stating unexpected costs for materials, for which he had not obtained prior approval. When we complained, he apologized for his inexperience. One example was that instead of removing what he estimated would be 5 tons of dirt, he told us it actually took 22 tons, and at cost per ton that was *twice* what he thought it would be (he hadn't checked first). That's pretty bad. In the best case he just doesn't know what he is doing and is a poor communicator, and in any case there are much better alternatives for landscaping services.

First and for most I should state that I was not contracted by [member name removed] but by his wife. I had very little dealings with [member name removed]. His wife and had a very pleasant experience through out the entire project and no work was added beyond was was decided in the beginning of the project. By his wife of which I am still on good terms with. When dealing with any below grade work there can be unforeseen issues, such as piping and most of all rocks. This also being one of the wettest summers on record, which postponed work. The client who contracted me was fully aware of this and signed all agreements for unforeseen circumstances. We had to go to small claims court in which [member name removed] lost. The case was awarded in my favor in less than 10 minutes. I run an honest business and have satisfied many clients on much larger projects then this one. Thanks Jacob lewis
5.0

Over all it was very good. Jacob gave me a detailed estimate with completion dates. His has a wonderful aesthetic sense, does quality work and finishes when he said he was going to finish. I would not hesitate to hire HGL again.

Description of Work
Created a brick patio at rear of house from used bricks.

We provide honest work with fair prices including everything from landscape lighting to irrigation and water catchment systems.

Give us a call if we can't do it we have a large network of companies we work with that we can refer you to.