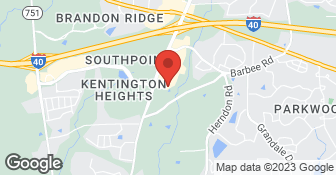 Local Expert Geek Squad Agents can fix your Appliance or TV regardless of where purchased. 90-day warranty along with professional, quick, and clean services. Check us out online, by phone, or at over 1,100 Best Buy stores.

It went awful from start to finish. I brought the computer in because of some issues with the DVD player recording and the keyboard. I had no complaints with the software when I brought the computer in. The Geek Squad found no problems with the hardware. Instead, they said that they had done some virus repair on the computer. But when I got home and started to use the computer, I noticed problems right away. The computer's desktop was in chaos--they left the computer in safe mode which is what the technicians use to work in. The background was a different background. My tax program had been accessed and had a duplicate icon. There were files that were accessed at 4am in the morning. The technicians let the remote Geek Squad work on my computer and didn't know what they had done so they left it in the state they found it in after the remote technicians. This was not the condition I had given them the computer in. After I got it back the first time, I called their phone support and was put on hold for over an hour. I found out that it was too messed up and I had to take it back. The Outlook email program was not accessible and the Document files were not being saved properly. I took it back to the store. I and was with them for 3 hours and they turned it back to me as "fixed". But again, when I got home, the Outlook program was not working because I found out later was because it was saving the emails in an incorrect place and couldn't be pulled up without errors. I had an up to date anti virus program but apparently there was a virus on the computer which did not become apparent until I took it home. I called up the phone support and again I was told that it had to be taken into the store. I went to another Best Buy store and they said that I had to take it to the original store. But the service was so bad there, I hesitated. I had to go home and back up everything which took days and days because the computer needed a complete reformatting. When I was able to take it back in, the Geek Squad manager told me that they couldn't work on it. I had a valid Service Agreement but the manager would not work on it because he didn't think he could fix it. I had to call the manager but I only got the Product Processing Manager and he also said that they would not work on it. He offered my money back on the service agreement. When I refused because they were the ones who had messed it up, he then offered to refund the computer. I refused that as well, because I would be left without a computer and the refund was not complete. So I went home, wrote an email to the General Manager of that Best Buy store and also to the Better Business Bureau of Minnesota. That was when I was allowed to bring the computer back and it could be reformatted. I had to provide my own disks of the back up and of Office. They reformatted, but I had to do the re-installation of most of the programs. I will never buy another thing from Best Buy in Durham, NC. I would not recommend the Geek Squad--either the phone support or their store support. The phone support has hours of hold time. It is a colossal waste of time and frustration.

Description of Work
I brought the computer in for computer service under their Black Tie Warranty Service before the first year expired on my Black Tie support.

My experience with them was pretty good. The only thing which was frustrating was that I had to go buy my own matching harness. It was hard to go basically to Crutchfield to get that to bring it to them. The only frustrating part was that they would not get it and did not stock it either, but my overall experience with them was good. I would possibly use this company again in the future.

Description of Work
I used Best Buy/Geek Squad to get a stereo system installed in my car.

Although it was worth the money to me the last time I used them, I have to say that their charges (typically flat fees) are not always reasonable. I have used them before and paid a few hundred dollars for what amounted to be about 20 minutes worth of work.

Description of Work
My computer completely crashed. I couldn't get Windows to start up (even though I could tell the power was on). The guy from the Geek Squad was able to get the computer started and rescue all of my important files and to clean it from bugs and spyware.

No longer do you need to deal with multiple dealers/contractors, incorrectly diagnosed problems, or overpriced services. We have the expertise and we promise to provide excellent and reliable service. We stock spare parts for all major manufacturers and thus can save you unnecessary time and trouble. We have highly trained technicians who are at the cusp of ongoing improvements, and who can advise you on the latest innovations and techniques. Call us anytime for a free over-the-phone estimate. To make sure your needs are met to the highest standards of satisfaction, all of our services come with a 90-day warranty. Thank you again for considering SantaAir for your HVAC needs.  …

We keep your heating and cooling equipment working properly, performing at peak efficiency while insuring your comfort and keeping your air safe. We Guarantee 100% Satisfaction with all our work. The professionals at Air Experts have been providing comprehensive HVAC services to the residents of Raleigh, Durham, and Chapel Hill since 1986.  …

Licensed and insured independent Heating and Air Conditioning contractor. 15 years experience. Locally owned and operated. The owner is present on every job.  …

Geek Squad - Best Buy is currently rated 3.3 overall out of 5.