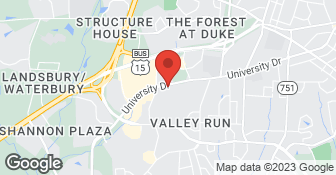 Cole Roofing & Construction is a "master certified" roofing and construction company. We have been in the roofing and construction business since 1973 and have installed over 5000 roofs in Wake, Durham and Orange county. In addition to roofing we also do all types of home repairs, additions, screen porches and gutters. We also install replacement windows. We provide free estimates and written warranty's for all of our work.Financing is available....

We've been very disappointed with the customer service of this company. They replaced the roof on our house for the prior owners, and it is still under warranty. But we've been unable to get them out to repair a recent roof leak. We were even willing to pay for the repair out of pocket without using the warranty but still couldn't get them to return phone calls or emails or come out to do the work. Very very disappointing customer service. We realized they're not accredited by the BBB and now I understand why.

Avoid this business. They have terrible follow-up, customer service, and owners. They are very unprofessional, insulting and condescending. They care only about getting their money. As examples, I asked them what they would do about my gutter guards 5 weeks before they were supposed to replace my roof, and they didn't respond. Then the week they were supposed to do the work they sent a document that said they aren't responsible for removing, reinstalling or replacing gutter guards with the disclaimer of course that they wouldn't be responsible for any damage. Their document also wanted me to inform them of any concerns in writing, before they did their work, I did. One thing I told them is that I have new grass in part of my lawn and also told them that they can access my entire house and yard, without walking on that area. Their response was: If the ground is soft and 10 people walk on it over one day it can get damaged. Their reply also insulted me by twice saying "It is really just common sense..." I told them to stay off of an area and they could get everywhere without walking on it, and rather than say "OK, we will certainly avoid it if we can, thanks for letting us know." they said what I posted above. One of the owners then called me and again was insulting. I reiterated the above, letting him know I was just doing what their document told me, and he said "Yep, that is just common sense" and started just saying "Sensitive people..." as if I was being an idiot. I say: don't walk on this area of my lawn and He says: if people walk on it it will get damages, that's just common sense. And of course he then let me know that they'd be billing me for 10% of the total cost (which I figured, because it is in the signed proposal) and if I didn't, they'd turn me over to collections. I asked why they didn't get back to me about my gutter guards when I asked. He deflected that and said something non-sensical. Avoid them at all costs. I will pay the 10% and sleep better knowing I don't have an uncaring, unprofessional company working on my house. If I could leave a ZERO start review, I would.

They were responsive and quick to provide an estimate. That was all they were good at. After sending the approval for work, I heard nothing. Several phone calls and voicemails later, I finally talked to Gary, who told me he would contact me later in the week to schedule a time to complete the job. Still waiting for that phone call, Gary.

Description of Work
We needed a fascia board replaced and gutter repaired.

It went excellent and were very pleased.

Description of Work
They install my roof.

These folks did a great job installing our new roof and cleaning up all the construction debris. All for a fair price and on time. Highly recommended

The reroofing crew was efficient and professional. We have a lot of mature vegetation and other landscaping around our home. We appreciate that the crew was careful not to damage it. New roof looks great!

Description of Work
Complete reroofing of our home

Fast, clean and reasonably priced. If you need a new roof Cole’s is the way to go!

Excellent Job. Great crew. Early arrival, hard work by everyone all day. But finished in one day rather than two. All very courteous. At end of day, really thorough clean up. Couldn't be more pleased with their work.

can't believe how fast they worked. The workers showed up on time, did the work quickly, and cleaned up the yard around the house without wasting time.

Description of Work
replaced roof on my home

The roof replacement was completed in 1 day. The crew worked very quickly and did a good job cleaning up when finished. Looks really nice. CertainTeed shingles with limited lifetime warranty and Cole has 2 year labor warranty. The gutters and helmets took 1 1/2 days. Very friendly crew. Explained how the helmets would be mounted to gutters when I asked. Also ended up having to replace some fascia boards but they showed me where that needed to be done after removing the old gutters. The wood repair looks great.

Hey there! We specialize on bath remodeling we are ready to help you take the next step on planning your project and obtain satisfactory results according to your idea and your budget contact us for your estimate. We also do plumbing services, decks siding repair, laminate flooring and tile. Best quality and Guaranteed work!  …

Cole Roofing & Construction is currently rated 4.7 overall out of 5.

Are there any services Cole Roofing & Construction does not offer?