A1 Lock & Safe of North Carolina 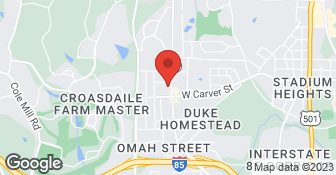 A1 Lock & Safe of North Carolina specializes in providing prompt and professional locksmith services, as well as safe repair and sales. Our full-service locksmith company offers services for residential properties, commercial buildings, and vehicles, and we are available 24 hours a day to ensure you always receive the help you need when you need it most. We are proud to offer affordable pricing on all services and we are known for providing the best work in North Carolina.Give us a call @ 919-471-1111 or email:a1ricky@nc.rr.com...

It went great. They were professional, reasonable and prompt. I would definitely hire again.

Tim was my technician and he was courteous, kind, and knowledgeable. After he completed the work, he checked and re-checked each lock to make sure they both worked.

Description of Work
Replace two bolts and rekey them both

Thank you for your review if there is any lock or key problem residential,commercial or automotive that arrives please fell free to give us here at A-1 call again Thank You!!!
5.0

A-1 came out the day after I called to investigate why our keys no longer worked in our front door lock. Brian did a thorough job investigating and solving the problem. We are very pleased with the results.

I had an almost 50 year old toolbox that the key had been lost for that I wanted to get opened. I had already had one locksmith tell me that he could not do it because he did not have the correct blanks to re-key it. I called A1 Lock and Safe and the receptionist told me to text pictures of the lock to Ricky. He told me that he wasn't sure he could re-key it, but if I just wanted it opened to come by the store. He also said that perhaps later they could make a key. I set up a time later that day to drop by. When I dropped by, I was greeted immediately by a worker who had been told by Ricky what I wanted done. This in and of itself was great, because I didn't have to re-explain the whole issue to a second person. We walked out to my car where the toolbox was, and the worker was able to open it in under 5 seconds! That was great too! Then we discussed next steps. I told him that ideally I would like to be able to lock and unlock the toolbox somehow myself. The worker brought the extremely heavy toolbox inside, and looked to see if they had any blanks that matched. They didn't, but he said they could make me a new lock with new keys. That sounded like a good plan to me. He, another worker and Ricky consulted on how best to make the new lock fit into the old toolbox. They said they could do it while I waited, and quoted me a very reasonable price. The work took under an hour to do, and involved metal grinding and cutting to get it right. In the end, the lock and toolbox look great, and I have a nice set of new keys to open the toolbox. Everyone was extremely pleasant to talk to, and they looked like they truly enjoyed doing their jobs, and this job in particular. It was a great experience.

We here at A1 thank you for your business and it was a pleasure to service and talk to you again thank you
5.0

I was quite pleased with the results.

Description of Work
I thought the reason I couldn't open a sliding glass door was because I had lost the key, but as it turned out, the door was stuck because of dried paint. The gentleman really worked hard to get the door open.

They did a good job! They were quick!

The service was excellent. Locks are working better than they ever have. The locksmith was friendly, professional, timely, and did fast excellent work. They also saved me money, as when I first contacted them, I was seeking to replace, rather than simply repair, the affected doorknobs and deadbolts. After diagnosing the problem, they advised me that the house had merely settled a bit, but that the hardware was of good quality and still in working order with a little adjustment, and that I could save a lot by not having to replace the hardware. What they charged me was extremely reasonable. They came out the day after I called. I highly recommend this company.

Description of Work
House had apparently settled leaving deadbolts and doorknobs sticking and difficult to operate.

I called A-1 and they invited me to bring the safe in, which I did. They tried to open it with the key, with no success, and then explained that the only way to get it open would be to drill out the lock. They had explained on the phone that this option might be necessary. I agreed, and they drilled it out right away. I had feared that I might have to leave it, but they did it while I waited. And they didn't charge me a lot. Very happy customer!

Description of Work
I had bought a cruddy little SentrySafe product to keep papers in a fire- and water-resistant box. The key opened it fine when I tested it, but once I put the papers in, I couldn't get it open.

They are very good. They are excellent in overall, price, quality, responsiveness, punctuality, and professionalism.

Description of Work
They provided locks for the front and back door.

John Bruner answered the phone and assured me that I wasn't the first person not able to replace a good front door lock combo. He promised to be at my home in 30 minutes, since my front door was wide open and unsecured. John delivered--as promised; installed the new locks within 30 minutes of arrival, so the whole experience took only an hour. He tested the locks and re-routed one strike plate hole to accommodate the new lock. John also offered to recycle my old locks for me with an old metal company! The charges were exactly what John had quoted on the phone, plus he accepted my "5% off" Angie's List coupon on the spot. I couldn't have asked for better service this afternoon when I needed it in a hurry. Thanks for rescuing me before my wife got home!

Description of Work
A1 replaced two front door Schlage locks (doorknob and deadbolt), which I had purchased but been unable to install by myself.

How is A1 Lock & Safe of North Carolina overall rated?

A1 Lock & Safe of North Carolina is currently rated 5 overall out of 5.

What days are A1 Lock & Safe of North Carolina open?

A1 Lock & Safe of North Carolina is open:

What payment options does A1 Lock & Safe of North Carolina provide

Does A1 Lock & Safe of North Carolina offer free estimates?

No, A1 Lock & Safe of North Carolina does not offer free project estimates.

Does A1 Lock & Safe of North Carolina offer eco-friendly accreditations?

No, A1 Lock & Safe of North Carolina does not offer eco-friendly accreditations.

Does A1 Lock & Safe of North Carolina offer emergency services?

Are warranties offered by A1 Lock & Safe of North Carolina?

What services does A1 Lock & Safe of North Carolina offer?

Are there any services A1 Lock & Safe of North Carolina does not offer?