AMC Concrete specializes in pouring concrete, making stamped, and decorative works in your sidewalks, driveways, porches, and especially patios. AMC has been in this line of work for one and half decades. We are an owner-operated business.

Completely satisfied with work completed and the company. Jeff set expectations and met them. He was very good with communicating any issues and delays. Our new driveway looks fabulous! Definitely recommend and will be using AMC Concrete again in the future.

Summary: TERRIBLE communication and sub-par work Tried to take short-cuts even when I gave them specific instructions. The full review: The adage "you get what you pay for" is somewhat accurate. While I got the lowest quote from AMC, as a whole, I am not happy with this company. Communication was terrible. I wanted to get a stamp and color for the porch and received a call from Jeffrey when he was at the facility to pick up the stamps and paint. At this point, he never sent me any images for me to choose from and suddenly I needed to make a decision on the color and stamp based on catalog pictures he took pictures of with his phone and sent me via email from the facility. Once he came to my property, they removed the existing driveway piece and slab where the porch would go and prepared it for the pour. I noticed that they did not put any gravel down (which I expected there to be) and contacted Jeffrey regarding this (this was a few days before the pour was scheduled to occur). I told him that I wanted there to be gravel as my driveway already cracked and there was no gravel previously (which likely caused the crack). The morning of the pour, the concrete truck pulls up but the AMC crew had not yet arrived. They arrive soon after and Jeffrey apologizes for being late and says that he did not have time to get the gravel. I was already turned off from the poor communication and started to get angry. I said that I gave him one specific request, to put in gravel, and because he was late I can't get it? I said that was unacceptable and that he would need to fix it. He then says that they would get the gravel but would have to charge me extra since the concrete truck was already waiting. I lost it. I said that this was his problem, that he was late, and I would not pay for his incompetence. Long story short, he got the gravel, they poured the concrete and I was not charged extra. They stamped the colored concrete and the next day they sealed it. This was supposed to be one color but after a few days, I noticed some white splotching all over the porch. I wanted to give it time to fully cure to see if the color would smooth out but then came the yellow pollen. So, I waited until the pollen stopped and cleaned it all only to still see the splotching. I contacted Jeffrey about this and have not yet heard back from him. I initially was not planning on leaving a review as I recognize that this is a small business and knew that I was not going to leave a positive review, but the lack of response made me change my mind. I would never recommend this company and if asked, would recommend any other instead of this one.

Description of Work
Replace portion of driveway and put in concrete deck in yard.

This company has very hard worker’s......Worked in hot sun with vey high humidity. I like that it’s a family member’s work together. Prices are reasonable.... I would certainly hire this company again! 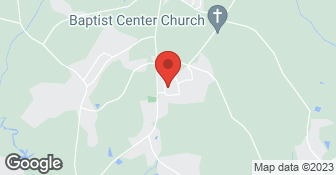 How is AMC Concrete overall rated?

AMC Concrete is currently rated 3.7 overall out of 5.

What days are AMC Concrete open?

No, AMC Concrete does not offer eco-friendly accreditations.

Are warranties offered by AMC Concrete?

What services does AMC Concrete offer?