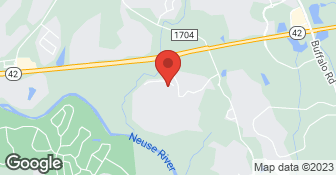 We are a full service contracting & real estate company that specializes in buying, fixing, and selling homes for home owners and investors. Alpha Contracting Real Estate Group home services to residential home owners. With over ten years in real estate we are dedicated and determine to bring our customers quality services and 100% satisfaction. Our goal is to establish a reputable name among our clients. We offer high quality customer service and workmanship. We take pride in our work because it’s our reputation on the line. We work with a few selected triangle home service providers. We do this to maintain the integrity and quality of our services and customer satisfaction....

Great! At first didn't hear back via email but once in touch on the phone amd text, all went great. Very professional and friendly and the tv hanging took and hour. Looks amazing!

Description of Work
Hung a 55" tv, bought mount from them and installed hidden outlet.

They did a great job and left no mess. Nicely done.

Anthony and the team at Alpha Contracting did a great job! They came out multiple times to answer questions and helped guide us in regards to lighting and tile. Anthony did an amazing job on the backsplash and made sure we were happy every step of the way. The under cabinet lighting works great and all the wires were expertly hidden. They started on time and finished when promised. They were very clean and did fantastic work.

Well he finally got the knot, and it worked out pretty good. An extra twenty dollars, because I reached the limit, and they still had to go to the house. I couldn't compare them, never had electricians before. The first time we scheduled something, they stood me up, and didn't call, so I called them. I had to reschedule for two weeks later. The second time they did show up, and started working on the smaller project, the larger project ended up using all of the money. Communications just sucked. Contractor's generally sucked. It seemed a little expensive. He was very nice. Communication, and personal things, I didn't like the way he talked about my house. He did his job great, and he had some other things in there, and I'm like dude not your business. Time I called them to it got done, a month, the actual hours, eight hours. They spilt some trash, that I had to vacuum.

Fine. Because of joist locations I will need to get the ceiling repaired.

They were excellent. Gave me good advice.

It didn't go well. The parts they brought in were defective. It wasn't their fault, it was the generators fault. It took over 2 months to get it completely installed. It should have only taken a couple days. The prices was fair.

Description of Work
Installed a generator for the house

I love it! It made such a difference in the look and the amount of light.

technician said he couldn't climb the ladder alone. said he would have to come back another time. but they would not come a second time to do this job. that was very unprofessional. I would not call these guys again. Angie's list gave me back my money with no problem.

Thank you for the review. It is our policy to have one guy footing the ladder for safety when working on two story lights. When we spoke on the phone we asked you the height of the light. You said it was one story. When Chris arrived it was two stories high. Sorry we were not able to help you on this project.

Hello and welcome to your one-stop resource for getting your home in tip-top shape! This veteran-owned, fully insured, husband and wife team are proudly serving Raleigh and surrounding areas. We created our business to make your home renovations, repairs and cleaning a smoother experience. We service home owners, renters, landlords and realtors. Isaiah can meet all of your home remodeling and repair needs. He has been working in the trades for almost 20 years from roofing to carpentry to plumbing to drywall and painting. If he can't do it he knows a local honest, tradesman who can. And Amy is here for your home cleaning needs from maintenance cleanings to thorough deep cleans. She has been cleaning houses for happy customers for over 8 years. Thank you for the opportunity to improve your home.  …

Bonded
Insured
All statements concerning insurance, licenses, and bonds are informational only, and are self-reported. Since insurance, licenses and bonds can expire and can be cancelled, homeowners should always check such information for themselves.To find more licensing information for your state, visit our Find Licensing Requirements page.
General Information
Free Estimates
No
Eco-Friendly Accreditations
No
Payment Options
Visa, MasterCard, Discover, Check, PayPal
Senior Discount
10%
Emergency Service
Yes
Warranties
No

How is Alpha Contracting overall rated?

Alpha Contracting is currently rated 4.6 overall out of 5.

What days are Alpha Contracting open?

No, Alpha Contracting does not offer free project estimates.

No, Alpha Contracting does not offer eco-friendly accreditations.

Are warranties offered by Alpha Contracting?

No, Alpha Contracting does not offer warranties.

What services does Alpha Contracting offer?