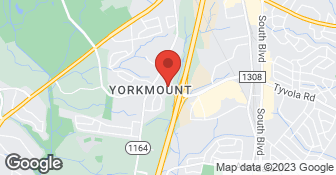 We will sanitize the workspace and all areas touched
We offer estimates and quotes using video calling
All statements concerning COVID‑19 business operations and essential services are informational only, and are self‑reported and not verified by Angi.

We have been professionally restoring kitchens and bathrooms for over 10 years. From fiberglass and porcelain bathtubs to kitchen counters, vanity tops and Kitchen cabinets. we can refinish virtually any kitchen or bath surface affordably. We are not limited by size or scope of a project. Whether it is re-glazing a porcelain bathtub in a single family residence or refinishing 1,000 apartment kitchen counter-tops, we are more then capable of tackling all your refinishing needs. We offer lifetime warranty on all our refinishing work. We also offer a 5% Discount to all senior citizens, military, and law enforcement. we use the best product on the market for this specific trade . our services include repairing, refinishing, re-glazing, and recoloring all types of surfaces including porcelain, fiberglass, ceramic, grout, laminate, formica, metals, plastics, and wood. We specialize in bathtubs, cast iron bathtubs, claw foot tubs, showers, ceramic tile, sinks, farm sinks, vanity tops, counter tops, kitchen /bathroom cabinets. https://www.renov8co.com...

Great job would use them again

They do amazing work ! Very profesional from start to finish . Our refinished shower looks brand new !!

Had my bathtub refinished by Renov8 couple days ago and the tub looks brand new . I would definitely recommend them to friends and family who are looking to have this service done.

Quick to respond and schedule repair. A little late the day of due to running long on a repair before mine, but let me know so I wasn't waiting and wondering. Once here, extremely courteous and professional. Did an excellent job with the repair, cleaned up any mess. Repair looks great! I would definitely use them again.

We had Joel come from Renov8 to refinish our two fiberglass bathtubs. He was very nice and very patient with all of our questions. He had to fix several small chips in both tubs, which was included in the price. There was no charge for fixing those, which other places will charge extra for. And still the price was better than two other leading places that I called. He worked very meticulously and carefully and made sure to tape and protect everything in the bathroom. He also did a nice job of cleaning up when he was done. We were very pleased with the job and it really looked like a new tub when he was through. I will warn you though, the smell is very strong, even with the exhaust system that they brought. But the smell was worth it how it transformed the bathroom!

We were very satisfied with working with Renov8 and with the final result of their work. They were very communicative and responsive to our questions leading up to the date of service, and handled themselves very professionally while at our home. They took great care to leave no mess and clean up after themselves, and our finished tub looks great.

Work was excellent - repair cannot be seen. Punctual and responsive. Would recommend for anyone in need of repair to tub/ cabinets etc.

It went really well. I felt super comfortable. I am really happy with the finished product. They arrived on time and answered all of my questions.