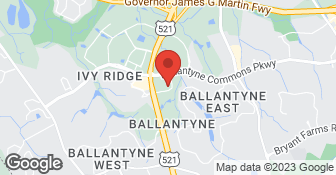 P. Saylor is a family-run company and we strive to show our care and commitment in every job we do. As a client, you will see first-hand that we truly care about providing the perfect fence to suit your specific needs and leave you with a quality product. Tim and Stacy Foley own and operate the business, pouring their hearts into every single job. When Tim arrives at your property for the initial quote, you may be surprised to see that this sophisticated businessman chooses to spend his days driving around town, meeting prospective customers and laying the foundation for lasting relationships. This dynamic duo is taking fencing to a whole new level. If you are in the market for a new fence, call us today and see how our unique company can meet your unique needs! P. Saylor Fence is invested in our community. We love what we do and we love our clients. When we build a fence, we believe we are building a future. A future of protection, peace of mind, beauty, and quality....

Well, I was very impressed at first. But on install day the process went VERY fast. Literally within a couple hours. I notified the install team of the irrigation system and told them they were free to place the posts in whatever position was required in order to avoid them vs sticking to a "set plan" . This was in January. When I turned the irrigation system on in April, the main pipe to the irrigation system was busted right at the area of the post. They HAD to know they did it and they told NO ONE and just covered it up. This has led to an expensive and rushed repair for us which they refuse to take ownership of. They sent junior installers out with no supervision at all and they clearly did not show ANY regard for my property of the damage they did to it. The Fence is lovely. But the professionalism and accountability leave a lot to be desired

Mrs. [Member Name Removed], We appreciate you taking the time to leave a review of our company on Angi's list. With all due respect, our installers are very skilled and take pride in their work. As you mentioned above, "the fence is lovely." Until now, we have received no correspondence from you regarding this damaged irrigation line, as we Installed your fence in Mid February. I am emailing you over a copy of your signed customer checklist where you initialed right beside where it states P. Saylor Fence is not responsible for lines that are unlocatable/invisible because they are rubber/plastic. There is no way to show the Installers, "knew and covered it up". If water didn't s*** out at the time, they may not have noticed the damage. When this happens, they always bring it to our attention, as this is inevitable at times as we are digging every post hole 24" deep, every 6 ft. We do appreciate and value your business and work very hard to provide a great end result. You are covered under a Lifetime Material warranty, Lifetime Workmanship warranty and Lifetime Gate adjustments! Please feel free to contact me directly, If I can help in any way! Thank you! Taylor Guarino-Director of Sales 704-660-7670
1.0

A recent Yelp review also describes my situation: “… had our fence installed and it looks amazing. The process was not. The lack of communication was pitiful...” Phone calls were unanswered, emails ignored, and installation dates passed without a word. I never received any updates or information without making several phone calls first. My emails to PSaylor rarely got a response. At one point well into our project, I got a phone call from a customer service person telling me they had no record of my account. I was also told at one point that a specific customer service agent was assigned to my account- I never heard from that individual. The whole process was a long one. On Nov 23, 2021, I received an email with an estimate for 54’ of vinyl picket fence from Stacy Foley, a principal at PSaylor. I attempted to get information about the actual fence product and description. All I was sent a poorly scanned document from the fence manufacturers catalog. By Dec 21, 2021, I finally got a representative to come to my home, measure, and write up a contract. The amount on the contract was over 40% more than I was originally quoted! It felt a lot like a bait and switch. I agreed to re-negotiate at around 15% over the original estimate. In hindsight, I should have backed out then. Yet, I sent in my 50% deposit, with an install date of Feb 10. Then I waited. Feb 10th came and went with not even a call. My calls and emails to Ms. Foley were never returned. Finally, April 6, 2022, I got a call, but only after I repeatedly called them. My fence was installed April 11, 2022, about 5 months after the original quote. But wait. The installers didn’t have post caps and installed the wrong picket tops. I was told they would return the next day to correct this. They did not. The PSaylor customer service rep said for several days that they would be returning the next day. They never did. I had to cover the posts myself to so they wouldn’t take in water in the rain. Over a week later, the installation contractor finally returned and finished the fence. Luckily, I documented every call, email, attachment, and contract. BBB A+ is on the side of the truck. I question how they got it.

It didn’t. This was terribly disappointing. Very rude. Had to cancel contract. in August I met at my house with a knowledgeable salesman from this company we did some measurements and talked about getting a vinyl fence. With Covid, vinyl supplies are hard to get so I was told it would be around a three month wait and I signed a contract for November 5-12 install. Paid nearly $2k deposit. I contacted PSayler today to see if we could look a moving it up or back a week. If not, no problem. Long story short. Got referred to a Stacy, who rudely and dismissively share “Due to’supply chain issues there a some 80 people ahead of you. We are not even looking at the ball park dates we gave you. “Maybe it will be in two or three months. “. 1.No call to me from pSaylor about making changes to install dates 2. Rude mean and insulting tone with office staff Three. I’m not sure how P sailor thinks I would know they were running eight or more weeks behind perhaps customers need to have telepathy

Description of Work
Install 6’ privacy fence across back line of my HUNTERSVILLE property.

The installation ended beautifully but was rocky along the way. The initial quote was quick and professional with a fair quote. We began the process of HOA approval but the HOA team had changed and they couldn't find our previous request. As we corrected HOA's initial concerns the fencing supply chain shut, down causing delays. P Saylor kept us informed at every step. Another HOA change required the initial fence to be changed after the materials had arrived but P Saylor worked with us to get the required materials for installation immediately. All work was done quickly under weather constraints. Any and every request made was supported. We are very happy with P Saylor and recommend them

Very professional from the beginning contact for an estimate to conclusion of installation. Work crew was outstanding.

Staff was respectful and professional throughout the project. All old materials were removed and hauled away. New materials were high quality and the install was spot on.

Mr. [Member Name Removed], My apologies for any inconveniences or frustration that occured during your installation. I do show several emails regarding installaiton updates from 4/15-4/24 (2019) stating we were very behind schedule due to the "crazy snow" we had early spring of 2019. We do offer every customer a workmanhip and material warranty. When you emailed on March 16, 2020 (1 year after installation) my office staff did mistakingly quote you $350 for the repair BUT then sent a corrected email 1 day later, March 17, 2020 stating you were still under warratny and we would send a crew member out within 2 weeks to fix the loose posts. Your email response after that repair was completed is as follows "Good morning Heather, Your guys came out and repaired the post quickly. Nice job. Unfortunately there is another post that is loose just couple posts up from the one that was repaired. Can you add me back to the schedule? Thanks, [Member Name Removed] We then sent a crew memeber out for the second time at no charge on May 14, 2020. Unfortunately, unforseen issues can arise during construction projects. I do know we purchased a jack hammer for the exessives rocks on your property and did not charge for the additional work per Paul's statement during the sales appointment. Due to the rocks it did take longer than normal to install your fence. Our promise is to provide you with a quality fence and to ensure we provide warranty services as stated in our documents. I feel we complete to work and will continue to honor any warranty work needed. Please feel free to reach out to me directly anytime with any questions or concerns. Thank you Stacy Foley (Owner/Operator) 704-660-7670
5.0

P. Saylor did an awesome job. The work was done quickly and efficiently. The office response time was great. The office staff followed up promptly when the job was completed. The finished product looks wonderful and all the gates operate smoothly. We had contact with several different people during the process and all of them were polite, courteous, and efficient. This was a project for which we took bids and P. Saylor was the lowest bid. We sought them out for a bid because we had a recommendation from a satisfied customer from our congregation. We would definitely recommend them to others.

Refused to do repairs on a fence not installed by the company. Ridiculous

My apologies but I wanted to let you know the reason. It is very hard to match materials that we did not install nor do we know how the fence was installed. We do provide a workmanship and material warranty to all of our customers and reserve our repair time slots for them. We appreciate you calling us and hope you understand why we were unable to help. Thank you Stacy
5.0

Love it. They still have to come back to replace the fencing around the trash containers. They could be better with communication and setting appointments, but overall I am very satisfied and already gave a neighbor their name and phone number.

Thank you so much for the feedback! We work hard to ensure a high level of customer service and appreciate the referrals!! Your trash enclosure was completed Monday 7/16! Thank you again Stacy

P Saylor Fence Co is currently rated 4.8 overall out of 5.

No, P Saylor Fence Co does not offer eco-friendly accreditations.

Are there any services P Saylor Fence Co does not offer?