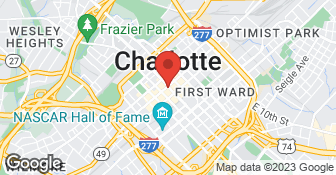 Founded in 1998, designers-choice.com, Inc. is a professional design and build firm which takes care of all phases of your home renovation project. Taking advantage of the most advanced project management and architectural design software available, our staff has the tools to design and construct the improvements that will enhance the beauty, the functionality, and the value of your home. With the capacity to render stunningly photo realistic three dimensional project models, we are able to create drawings of your home showing your finished project from any point of view, both interior and exterior.. ...

From the very beginning, with our initial meeting with the owner, Tom, to the very end it was a really, surprising great experience. Tom was able to create CAD designs which enabled us to visualize the final finished product. He is friendly yet knowledgeable. He introduced us to his foreman/crew leader, Mike, who actually oversaw all the work. A whole team of workers showed up early every day and the progress they made was rapid on a daily basis. We were so impressed with the workmanship and attention to detail that we kept telling them daily that it was so nice. They used extra 2X4's to strengthen the gable roof, they were absolutely meticulous in their workmanship. They even painted 2 coats of paint in the new porch area and then painted the rest of the deck area they did not work on so it would all match! We have lived in multiple states and had multiple contractors over the years and, by far, this was the absolute best experience. We had 8 estimates total. Some guys aren't licensed, Tom is; a major deck builder in the area who advertises on TV all the time said it would be 6-8 weeks until completion from the start, ours was a little over 2 week; his price wasn't the absolute lowest but near it but what they did was so much more than anyone else would that there is really no comparison. We would HIGHLY recommend. The very best guys out there.

Description of Work
We wanted a screened porch built onto approximately half of an existing deck. Also wanted doggie door, ceiling fan w/light, security light. As we have a walkout basement, our deck is quite elevated and the yard drops off sharply behind it.

It's going well and they are doing excellent.

Didn't go very well. Took way to long to complete. I believe the biggest problem was personality conflict. When the project was completed it was exactly what we wanted, so I have to give him some credit. Because our personalities didn't mix well doesn't mean that it will happen with another client.

Description of Work
built a porch and paver slab

Personality conflict, that's rich coming from the most disagreeable woman God has ever put on earth. She was not able to get along with anyone, it got to the point where staff would threaten to quit rather than deal with her. Heaven and Earth was moved to give her as she says" was exactly what she wanted". It cost $14K to do it she paid $9K. I was going to let it go, but based on this review I am now going to place a lien on her home and sue her for the cost of the engineering work that was not in the contract that Designers-Choice paid for.

It was a 5 day project that was a little slowed down by weather. The workmen were all respectful and punctual. The job was done with as little disruption of our lives as possible. The finished product is a brand new room. Last night it rained and for the first time in 13 years this did not mean that there was a mess to clean up in the sunroom. I would highly recommend this team. They are professional and make sure to add the little touches that make a big difference. Little things like installing the ceiling fan and adding shoe molding that was not in the original plan were very nice touches that added to our happiness with the finished product. Tom said that he is very careful with pricing to try his best to make sure that he doesn't have to come back and ask for more money at the end and he did just that.

Description of Work
We had a poorly constructed sunroom that leaked every time it rained. Designers-Choice came in and told us that it needed to be replaced. They were patient while we got other estimates and when we engaged them they were punctual and efficient.

The project was well-managed with a terrific end result. When hiring a company, we were concerned about how the porch roof would be incorporated into our existing roof line, and we hired Tom based on his design as well as the price. As we went through the bid process, we changed our mind about specific features, and Tom was always timely in providing an updated quote and revised drawings. He did a great job in his design and we like how he accounted for a large birch in our backyard as well as stair placement to access the backyard. We now use our porch more than any other room in our house. We have some odd grading issues in our backyard that meant water flowed off the new room and straight back onto the new patio. Another company offered to correct this during construction, and I wished Designer's Choice would have considered that a bit more as we have had to do some work to re-route the water from the new gutters. To nitpick, some minor cosmetic details went unnoticed until my husband pointed them out: wood planks placed the wrong way so the stamping can be seen, nail pop-ups, holes that needed to be sealed, etc. However, when we pointed these out during our walk through, most were corrected. We decided to live with the stamping. There has been one issue since completing where a beam covering came loose, but they promptly returned to fix. Lastly, the sub-contractor for the concrete was extremely slow in wrapping up the process. If we had built an open deck instead of a patio, it would have been completed more than a month earlier. The lack of communication was a little frustrating, but I don't think this can be blamed on Designer's Choice. Overall, for the price and efficiency, I would recommend this company.

Description of Work
Company built a screen porch, replacing an existing deck original to the house. They sub-contracted out to pour an adjoining stamped concrete patio space.

The screened in porch is 14' x 19' and fits a sitting area and a dining area. I had two ceiling fans installed and 5 outlets. They had to tie in the roofing to the existing house since we live in a 1 story house. They did a great job! Each day the team came to our house at 7am and left at 2pm. They answered any question I had and were great with answering the questions of my 5 year-old son

Description of Work
I had Designer's Choice remove my existing deck and replace it with a screened in porch. It is beautiful! .

We met with Tom in the fall of 2010 (about 7 months before the expected due date of our second child). We designed the project together, and the major demolition started on December 29th. We moved back in to our completed home on May 2nd, and our daughter was born on May 15th. We choose Designer's Choice because of the crew that is on site everyday of the project. They show up early, they work hard, and they care. They did a tremendous amount of work in a short period of time. We had them under the gun on timing the entire project and they held up. They demo'd the second story of our home and re-framed it while working under tarps in the rain. Tom is committed to satisfying his customers - probably to a fault. they added over 1000sq ft to our home in 4 months. in a major renovation, there are occasions where you don't know what's behind the wall until you open it up. Tom worked hard to keep the project moving forward when we hit any areas of concern. we were moving so quickly at the end of the project that there were areas that weren't perfect. More importantly, Tom has come back to address any areas of concern and remains active around the job. My 4 year old (then 2 1/2 -3) still talks about the crew all the time.

Description of Work
Tom, Mike and crew started by building new piers in our basement and leveling the house. They addressed an issue with our front porch, and then did a complete home renovation. They demo'd a sunporch and the second floor of our home, and rebuilt a larger sunroom and full second floor.

I have paid him in full. The home inspector came yesterday as I am trying to sell my home. The inspector said the porch was not built up to code, as the electrical was installed incorrectly. The job site was not cleaned up as which was in the contract. He did not get a final inspection and he cancelled the building permits. I want him to do whatever is necessary to get the building permit, and to fix the other problems.

Description of Work
Hired him to build a screened in porch.

This is not a customer of designers-Choice. I have no idea why it is here.

We install LOW VOLTAGE landscape Lighting systems. Our products are of the highest quality, utilizing energy saving LED technology with smartphone App controlled capabilities. Try our FREE Lighting Demonstration. We will come out to your location at NIGHT, set up our lighting for you to view and create the atmosphere that best suits your needs. Call Owner/Operator Tim Snyder 704-749-4949  …

Bonded
Insured
All statements concerning insurance, licenses, and bonds are informational only, and are self-reported. Since insurance, licenses and bonds can expire and can be cancelled, homeowners should always check such information for themselves.To find more licensing information for your state, visit our Find Licensing Requirements page.
General Information
Free Estimates
Yes
Eco-Friendly Accreditations
No
Payment Options
Check, PayPal
Senior Discount
5%
Warranties
Ask for details

Designers-Choice Com Inc is currently rated 4.4 overall out of 5.

No, Designers-Choice Com Inc does not offer eco-friendly accreditations.

No, Designers-Choice Com Inc does not offer a senior discount.

No, Designers-Choice Com Inc does not offer warranties.

Are there any services Designers-Choice Com Inc does not offer?