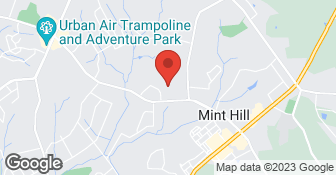 OWNER-OPERATED. USES SUBS FOR PLUMBING, ELECTRICAL & HVAC. COST IS DETERMINED BY THE JOB & SOME JOBS CHARGES BY THE HOUR. TRAVEL CHARGES MAY APPLY. MAY CONTACT THROUGH EMAIL OR PHONE....

Larry does good work. He does what he says he will do, and does it in a timely manner. He always gets back to me quickly. He is reliable and that important to me. The prices are reasonable.

Description of Work
Replaced the trim, put in attic flooring, and installed an attic tent.

WHEN I CALLED LARRY BACK ABOUT A PROBLEM THAT AROSE AFTER HE REMOVED MY EXISTING COUNTER TOPS, HE REFUSED TO RETURN TO CORRECT THE PROBLEM. THE PROBLEM WAS THAT AFTER HE DISCONNECTED THE PLUMBING AND REMOVED THE COUNTER TOPS, HE ALSO REMOVED SOME OF MY CABINET FILLER STRIPS AT THE SAME TIME. WHEN THE GRANITE COUNTER TOP INSTALLERS ARRIVED, THEY COULD NOT INSTALL THE COUNTER TOPS AND LEVEL THEM UNTIL THE CABINET FILLER STRIPS WERE REPLACED. NOW MY KITCHEN PLUMBING WAS DISCONNECTED, I HAD NO KITCHEN COUNTER TOPS AND COMPANY WAS COMING OVER IN 2 DAYS FOR CHRISTMAS! I CALLED LARRY TO EXPLAIN THE PROBLEM AND HE STATED THAT IF HE HAD TO COME BACK AGAIN, HE WOULD BE CHARGING ME 1/2 DAYS LABOR PLUS MATERIALS. WHEN I ASKED WHY IT WOULD TAKE SO LONG JUST TO REPLACE THE FILLER STRIPS (THAT HE HAD REMOVED!), HE THEN STATED HE CHANGED HIS MIND AND WOULD NOT FINISH THE JOB AT ALL! I LATER FOUND SOMEONE WHO RE-INSTALLED THE CABINET FILLER STRIPS FOR $100, BUT LARRY REALLY LET ME DOWN.

Description of Work
REFINISHED CABINETS, INSTALLED ROLL-OUT DRAWERS AND TORE-OUT COUNTERTOPS FOR PREPARATION OF GRANITE COUNTERTOPS BEING INSTALLED (BY A DIFFERENT COMPANY).

I was hired separate from all the work I had completed for you & paid in full for to remove your countertops prior to your 1/2" granite countertop install. This job was done & you paid me for it. In taking the old tops off there were buildup strips that came off with the Formica tops, these were left at your home for the top installers to refasten. There were also particleboard buildup strips around your sink that had severe water damage & were thrown in your garbage with your knowledge of all that had been done. Our dispute started when your top installers wouldn't or couldn't put the strips on. You contacted me & agreed you would pay me to do the install & I told you I could install the old & make new for $200 plus material. This is my half-day rate. You stated you thought I should be able to do this in about two hrs or less. I then again mentioned there was a half-day rate & unless you were willing to pay it I wouldn't do the install. Again you argued & at that time I stated, "I choose to no longer work for you or do any other work for you whatsoever." Your beef with me seems to be that you wouldn't agree to my pricing for the strip replacement not that I didn't finish the job. It was not my job to repair any damaged or missing buildup strips. My first contract did not include the removal of your old countertops & yet you have bunched it with the top removal. All your complaints should not of included this you chose not to pay my rate & I suggested you find someone else.

We provide painting interior & exterior Outdoor brick paint Drywall installation and repairs High Quality Services Warranty Work We specialize in interior and exterior painting services, cabinet painting, staining, and more! We guarantee your satisfaction, and we won’t leave until the job is done right. We pride ourselves on the quality work we provide, while delivering great customer service! Check out all the services we offer below and call -or- click to schedule a free estimate today!  …

Gutter World has been in business for over 14 years , with offices in three states NC, SC, and OH. The company is built on family values and integrity. We offer quality service at an affordable price. Contact us today about an estimate! 5% discount offered to Military and Seniors.  …

We have over 27 years of experience and are veterans to the Charlotte area. We manage the business with multiple crews. We specialize in residential and commercial gutter systems and numerous gutter guard leaf stopping systems. We also specialize in other exterior products, please call us to discuss your needs.  …

Bonded
Insured
All statements concerning insurance, licenses, and bonds are informational only, and are self-reported. Since insurance, licenses and bonds can expire and can be cancelled, homeowners should always check such information for themselves.To find more licensing information for your state, visit our Find Licensing Requirements page.
General Information
Free Estimates
Ask for details
Eco-Friendly Accreditations
Yes
Payment Options
Check
Senior Discount
ASK FOR DETAILS
Warranties
Ask for details

BORKOWSKI HOME IMPROVEMENTS is currently rated 4 overall out of 5.

No, BORKOWSKI HOME IMPROVEMENTS does not offer free project estimates.

No, BORKOWSKI HOME IMPROVEMENTS does not offer a senior discount.

No, BORKOWSKI HOME IMPROVEMENTS does not offer warranties.