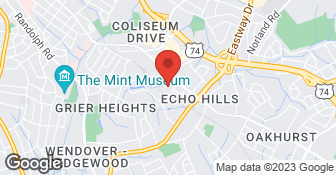 Bob Furr Wallpapering & Painting Inc is a leading provider to the Charlotte area of interior and exterior painting services for both commercial and residential projects. Services also include wallpapering for homes in Charlotte....

Thank you for the kind works. Look forward to working with you in the future.
5.0

I attempted to call and schedule the service. I placed at least seven (7) phone calls in an attempt to schedule. I received ONE return call at approximately 4:00 pm in the afternoon asking if they could come at 8am the next morning. When I received the message at 5:15 pm, and called back there was no answer. Subsequent calls were unacknowledged and unreturned. Very disappointing and very unprofessional.

Description of Work
Furr was recommended to me by my interior designer. After promptly coming out to give me an estimate on my powder room for stripping and re-wallpapering, I attempted to call and schedule an appointment for the work to be done.

I really love them! The highest quality work. They do an excellent job!

Description of Work
They did crown molding, painting, painted wood panels in my bathroom, and wallpaper in 2 bathrooms.

Excellent! The workman primed out red color walls, painted a green color - similar to the wallpaper and then hung grass cloth wallpaper. They did this over two days in a living room and dining room. The workman were prompt, did excellent work and cleaned up after themselves. They are experts at their craft, making sure to that seams in the wallpaper were proportionate around the room - to ensure that the final product was pleasing to the eye.

Description of Work
Primed, painted a base coat of paint and hung grass cloth wallpaper.

the two gentleman were extremely polite and on time. They went straight to work and just took a small break for lunch and went right back to it. They were extremely neat and cleaned everything up. And even took the time to paper the light switches which was a nice touch.

I just wanted say thank you to this company. The men doing the painting really did an excellent job. Every time I turned around they were painting with meticulous care. It made me feel good about my choice. The price was higher but they spent a lot of time being careful and paying a lot of attention to detail. It was a lot of work and they did it all really well. I was very pleased with the results.

Description of Work
They put up & painted crown molding in every room. They also painted a couple rooms & all the trim - doors & everything. They also wallpapered two bathrooms.

They were prompt, did a good job and left everything tidy.

Description of Work
This team removed wallpaper from a bathroom, cleaned the walls, rehung new wallpaper, and rehung towel bars and shelves. T

Description of Work
Bob Furr's crew did some painting to repair a small section of our ceiling following a roof leak. They were extremely helpful and courteous, and did a very professional, high quality job. They even helped move all of the furniture back in to the room after they had finished their painting work.

Very pleased with Bob Furr and those that work for company. Excellent service and workmanship.

Description of Work
Remove wallpaper in hallway and bathroom and prepare walls for the new wallpaper. Excellent customer services, very skilled and pleasant workmen. Would highly recommend this company.

Very prompt and professional. Did a great job hanging the wallpaper and cleaning up the site. I would hire them again.

Description of Work
Wallpapered a bathroom.

They came out to look at the bathroom while it was under construction, and he was very specific about what needed to be done before he could do the work. They were very responsive, and came out when they said they would. They were very professional, and they e-mailed a very specific and detailed quote so we would have it on hand. They made sure that everything was ready before the work, such as having the wallpaper available. They missed a switch plate that wasn't on the wall, and I called them about it, and they were out first thing the next morning to fix it. They even said that they would've picked up the switch plate for us, but we had already gotten it. They were very detail oriented, and were very good about communicating.

Description of Work
He wallpapered our bathroom about a month or two ago.

I bought some of the paint myself that they didn't reimburse me for. I was suppose to receive samples before the work started and they never came with those. I had to do it myself. I had to drive from one end of Charlotte to the other to get the the specific paint store they used. They complained they used three coats of paint to cover the wood on the bookshelf but they didn't sand it properly so the paint wasn't sticking. They did a shoddy job. I had another painter come in to fix their mistakes. I would never use them again nor would I recommend them.

Description of Work
I have a 3000 square foot condo that I had Robert's company wallpaper and paint. He contracted the work for $18000. I was not happy with all the work that was done so I contacted Mr. Furr. I told him I would pay him all but $1000 and assumed he was a man of his word and would come back and fix the areas I thought needed more work. Since that day I haven't been able to get a hold of Mr. Furr. He refused my phone calls. I sent him a certified letter to his home and he didn't respond to that either. (Note - not all the work they did was horrible but the few spots that needed extra attention were not attended to properly.)

They were wonderful. The workmen and the foreman did a great job. They actually did spill a little paint, but sent someone right out to take care of it. Everything was done with absolute dependability and I have nothing bad I could possibly say about them.

Description of Work
They painted two small rooms, a larger rooms, two halls, and three big rooms. They also painted a stairway. This also extensive prep work and clean up as well.

He was 3 hours late for the initial appointment to measure, which started things off on a not so pleasant note. I've tried for 3 weeks to get an estimate out of him. I've called, and he never followed through. He will tell me the estimate will be here in a few days, but it hasn't.

Description of Work
I contacted him for an estimate. He did come out and measure.

THE QUALITY WAS GOOD AND I COULD TELL THEY WANTED ME TO BE SATISFIED, BUT IT WAS HARD TO GET SOME PARTS OF THE JOB FINISHED BECAUSE THEY HAD TO PULL SOME OF THE GUYS OFF MY JOB TO GO TO ANOTHER JOB. COMMUNICATION WAS POOR.

THE QUALITY WAS GOOD AND I COULD TELL THEY WANTED ME TO BE SATISFIED, BUT IT WAS HARD TO GET SOME PARTS OF THE JOB FINISHED BECAUSE THEY HAD TO PULL SOME OF THE GUYS OFF MY JOB TO GO TO ANOTHER JOB. COMMUNICATION WAS POOR.

KEPT PUTTING OFF START DATE AND THEN NEVER SHOWED OR CALLED. BLAMED MEMBER FOR DELAYS.

Description of Work
DID A MAJOR JOB AND DID A GREAT JOB. WHEN I HAD A COLOR PROBLEM, THEY HANDELED IT VERY WELL.

100% Thrilled with our service or you don't pay!!! Full Service Interior and Exterior Painting. Our crews are the BEST IN CHARLOTTE! We are the preferred Painting Contractor for some of Charlotte's Largest Real Estate Firms and Property Management Companies. We also Paint Cabinets as well. Three (3) room minimum Please. Residential & Commercial Service.  …

Are there any services Bob Furr Wallpapering & Painting Inc does not offer?