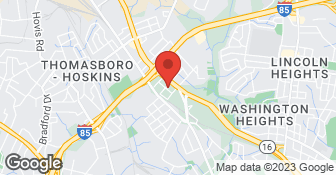 Hello My name is Wanderson from Quality hardwood floors. I have over 20 years of experience in working with all types of hardwood floors, and I have many great references. It would be my pleasure to assist you with your project and stay within your budget. Please call or text me at 704-890-1554.  …

The worst and most costly experience we have ever had. All Improvements is managed by Barry Callus, who represents himself as a company who can do major renovations. He had a list of supposed "satisfied customers" that I called. Barry Callus was intoxicated many days while he was managing the work being done on this home. He took the money, did not complete the work. did not get the permits needed, which resulted in the city closing down the job for weeks, left lots of construction material and debris on the site, walked off the job and did not finish the work as outlined in his contract. Hvac unit that was installed less than 2 years ago is actually 5 1/2 years old, no warranty information was given to us for the unit. Our current HVAC company cannot get any warranty info on the unit and we are now faced with a $2100. repair. I called Barry Callus yesterday, he told me that he does not remember who the unit was purchased from and that he is out of business and can't help me and hung up.

Description of Work
All improvements agreed to renovate a home we purchased. Their contract was for $37,222.00. Their contract outlined the work to be done for this amount. We paid 40% upfront for the work to be started. The balance of 60% was due to be paid on completion of the job. We had been told by Barry Callus that the work would be done by himself and his partner, Marcus. This was not true. They did none of the work. It was all sub-contracted out. After approx (5) weeks, To our surprise, Barry and his partner Marcus approached us and advised us that they had no more money to put into the job and if we did not give them more money they would shut the job down. Not wanting the job to shut down, we reluctantly gave them another check for $10,000. After this happened, we realized that Barry had not obtained the necessary permits for the work he was doing. He kept telling us that he did not need to get permits. One day the Code Inspectors for the City of Charlotte came in and closed the job down. Barry harassed us because he wanted us to pay additional money for the permits. We did eventually get the permits for the job ourselves. The work moved extremely slowly and they were busy putting up sheetrock rather than doing the underlying repairs that were needed. Barry came to the job appearing INTOXICATED , with the smell of Alcohol on his breath many days and became irate when we attempted to discuss the job with him. He continued to ask us for more money and began to give us additional bills for work to be done. At this point, we refused to give him any more money and requested he follow the contract. The work went very slowly, some of the sub-contractors complained to us about not being paid. Eventually the work slowed and stopped. All Improvements walked away with $$24,889.00 and left the property in shambles. They left all of the construction material that we had to pay to have hauled away and the house still had a lot of work to be done. We had to call in other contractors and do a lot of the work ourselves. It has taken us the last 18 months to complete the home with other sub-contractors and our own work. Among the work that all Improvement did was to install an HVAC unit. We were told the unit was new. Last week the unit stopped working. It needs a new compressor totaling $2100.00. Thru research, I find out the unit is 5 1/2 years old, although it was only installed in our home less than 2 years ago and has never been used on a regular basis because no one has lived in the home. I called Barry Callus because he did not give us the warranty papers. He accused us of breaching the contract and told me that he doesn't care what we do about the unit and hang up. This is what prompted me to make this complaint, so that others maybe aware of the history of dishonesty of this company.

We asked for an official written estimate, but he told us because our job was so small it wasn’t worth a written estimate. He ended up only doing half of the work for us. They charged us labor only as I had already paid for the materials. He spent a lot of time flirting with our neighbor and didn’t even care that we were at the house. I ended up finishing the fence myself and found out in that time that he had damaged what work he did do. He destroyed some things we had to rebuy! He left his ladder at our house and garbage all over the place from eating. I wouldn't recommend him.

Description of Work
We called him out for a fencing estimate. I ended up hiring him to finish my fence. Half way through this job he says he wants an additional $250.00.