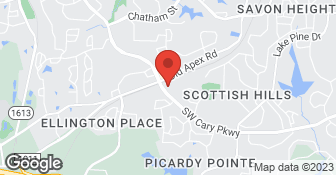 They did an excellent job and I'm very pleased. They are friendly, knowledgeable and I will continue to use them again.

Description of Work
They screened my patio.

Great! The estimator, Mike, arrived exactly when he said he would and was very thorough and courteous as we looked at each window individually together. A gal from the office had even called that morning to confirm that he was on his way. We really appreciated their respect for our time. I was also pleased when Mike suggested ways to keep the cost down. I had thought we would need all new screens, but he pointed out that some screens merely needed a piece of the frame replaced, some needed only the screens replaced, and some windows needed new screens altogether. The work was scheduled a couple weeks out and during that interim period he redid the estimate twice for minor details that had come to my mind after his visit. The day of the work, Omar arrived five minutes earlier than the earliest end of the time window we had been given. He rang the bell, introduced himself and politely asked if he could pull into the driveway, having first parked on the street in case I needed to pull my car out of the drive. All work was done on our property. He estimated two hours and it took exactly two hours. He responded happily and immediately to my questions and a few small concerns; he was very understanding as I reviewed the work two or three times. He made sure I was satisfied before he finished, then he cleaned up thoroughly when he was done. An awesome employee: friendly, courteous, responsive, and skilled. The screens look great! We are happy with the work and with all three of the very professional people involved. Highly recommend!

Outstanding! I had initially hired Raleigh Screen Guys to replace nine window screens on our 20 year old home, but they just stopped communicating entirely so I was forced to look elsewhere after wasting a month of my time. Enter Screen Medics. A professional outfit from head to toe - from Rich the owner to Erick and Emanuel who performed the work. Couldn’t be happier. They come to your house and do the work on site.

The Sales people were thorough, explained to whole process, what materials they used and how it would all be done. Quote was reasonable. And when we called to schedule the work, the lead times were much shorter than expected. The workers showed up right on time, did a great job, and left without leaving a trace, other than a very nice looking screened in deck. And it has held up well, even with stood a Hurricane last week without issue. Definitely would hire these guys again.

It went very well. Rich came out promptly and provided an estimate. I had to wait for HOA approval, then they came right out and did an excellent job. It looks fabulous. Installers were on time, professional, neat, and courteous. They used a heavy mesh screen and vinyl frame. Materials are high quality.

Description of Work
screen the deck

Came out and gave a quote on repair of several very large screens on our enclosed porch. Showed up to do the repair as agreed and with quality. Would definitely hire again! Thanks for the great service!

I sent a request (to contact me for an estimate) through Angie's list a week ago and have not yet received a response.

Rick came out and gave me a free estimate which was way lower than I anticipated so I was more than surprised. It did tKe a few weeks to get an scheduled install appointment but I was okay with the wait. Screen Medics technicians were professional, polite and went about building my screens. They made sue I knew how to remove/replace them should I need to. I am very pleased with the look of the product.

They did a great job custom building and installing our screens.

Fantastic. The owner is super, and the crew was fantastic. On time, polite and kind. I couldn't be happier.

Description of Work
Replaced squirrel and cat damaged on porch.

Crew arrived at the scheduled time and completed the job in one day. They were able to reuse all wooden battens which saved me money. Also, the screen on my relatively new porch door had been previously stretched and they repaired that also. They did a great job.

Description of Work
Re-screen approximately 8 foot by 16 foot by 8 foot high back porch.

Awesome. They were very professional, on time and did a tremendous job fixing my sliding screen door.

Rich (owner) was super responsive, quick to give me estimate, made it easy for me to understand and agree to the project. The team who did the installation were really great: efficient, competent, nice, easy to work with, and on time for start and end. The screens look great and how they're installed will last for a good long time. Price was reasonable, and good value given the high quality of product and installation. The only glitch was a last minute (afternoon before the 8:00am appointment) reschedule due to some conflict; the good news is that was the only issue in the whole project, so yes, I'd work with this company again and do recommend them.

Description of Work
New screens -- manufactured and installed -- for all of my first floor windows.

Great service. Didn't matter that it was a smaller job. Free estimate which was accurate. On time. Done in an hour (as estimated). Price was half what was quoted from the manufacturing company with a lot less fuss--including an upgraded screen with better visibility. Brand of the door frame was no problem; neither was it's age (20 years). Great find.

Description of Work
Replaced screens on french doors that had been chewed through by dog in multiple places.

Description of Work
Currently still working with them,

Ssent numerous emails requesting the owner (Rich) to come out and look at the installation of the lattice strips. Some were installed backwards (the rough side is showing), the strips were cut in all different sizes, the staples are coming out, some of them have a terrible paint job - it just looks bad. We also had an issue with the screen in the door being blown out during a thunderstorm. Screening should not blow out during a storm. It wasn't installed correctly and we emailed him the next day requesting he meet with us regarding the door and to go over all of our issues. He replied that they were open between 9-5 and was there a time that worked best for us. We replied back no, that the earliest we could do was 6pm. That was April 10th, haven't heard from him since. Sent another email on the 24th; still no response. Besides all of this they did not clean up when they did the tear down of the screening; left a mess of nails, staples, etc., paint was dripped everywhere, and they left all the scraps of screen, lattice, etc. in the garden that surrounds the porch. .

Description of Work
Replaced existing screened porch screen, door screen & pet screen (which he threw in for free), painted UPDATE: Returned on 6/8/15 to fix all of our issues. Not great but better than it was. You would think after all of the problems we had that someone from the company would follow up the next day to be sure everything was okay. Haven't heard a word from anyone.

Screen Medics hours of operation are Monday - Friday 8am-5pm. This customer wanted us to come out after hours. We told her on numerous occasions that she did not have to be home for us to correct any issues but she refused. We installed the screens the way she asked us to with the budget she had. Once we started the job, she wanted to add things and expected them for free. We gave her a great price and did a great job. If you read the rest of our reviews, you'll see that we have a reputation of doing good work at a fair price. Unfortunately, some people just can't be made happy no matter what you do to try.
5.0

The technician showed up on time. He was very professional and pleasant. It took 1.5 hours to complete the job which was the amount of time I was quoted.

The guys from Screen Medics arrived on time. They we're friendly and professional. They even took off their shoes before coming into the house without being asked. They finished, cleaned everything up and left the windows looking better than before. Great job.

Rich and Company provided a competitive quote and the most granular recommendation i.e. covering things that two other companies did not. Very thorough - particularly the painting - and worked with us on our door options. Highly recommended.

We are a family-owned painting business and have the experience and dedication to get the job done right! We guarantee that we won't leave until the job is completed to your satisfaction! Our owner is on-site supervising every step of your project! We pride ourselves on the quality work we provide, while delivering great customer service! Call or click for your FREE estimate today!  …

We are here to help you with your future project. Premier Painting will help you transform your home, or place of business into a masterpiece. "Your Home Is Your Canvas", and we dedicate ourselves into helping you achieve this goal. Premier Painting takes pride in our quality of work.Our team of painters are highly skilled professionals & have several years of experience! We are looking forward to meeting you.  …

Insured
All statements concerning insurance, licenses, and bonds are informational only, and are self-reported. Since insurance, licenses and bonds can expire and can be cancelled, homeowners should always check such information for themselves.To find more licensing information for your state, visit our Find Licensing Requirements page.
General Information
Free Estimates
Yes
Eco-Friendly Accreditations
No
Payment Options
Visa, MasterCard, American Express, Discover, Check, PayPal
Warranties
No

How is Screen Medics overall rated?

Screen Medics is currently rated 4.8 overall out of 5.

What days are Screen Medics open?

No, Screen Medics does not offer eco-friendly accreditations.

Are warranties offered by Screen Medics?

No, Screen Medics does not offer warranties.

What services does Screen Medics offer?

Are there any services Screen Medics does not offer?