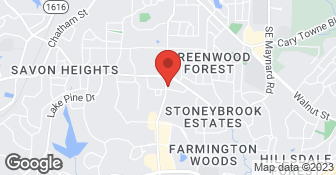 Welcome to JayCo PressureWash & Deck Stain.We are the premier professional pressure wash & deck/fence staining company. Family owned and operated. We have been pressure washing houses, decks, and concrete for over 24 years. Our deck restoration services offer water base and oil finishes. We wash and prep all decks to meet the product's strict specifications for preparation and warranty. We are certified contractors for nationally known deck products. Every deck project and budget are all different. Please call us today for a free consultation. Please call us today to schedule your appointment....

Jay was very professional. He came over after I called and gave us an estimate. He and his wife then, very proficiently completed the work. I had requested he paint our picket fences too, when he came to give us the quote, but forgot to remind him when he came to do the work. I called him a few days later to ask if he would , and he came over and not only power washed the picket fences in our front yard but also washed the ones in the driveway, which was not part of the bid. I would definitely hire him again. He is so friendly and has a lot of integrity. Thank you Jay !!

I expected it to look whiter than it did. I took a pic from my cell phone and will send it to you.

Hello [Member Name Removed] I think there is some confusion. My company did not do your driveway so I would appreciate it if you would correct your review. If you need us to look at it we might can help. I have all A reviews and do not want this C review to bring down my average since we did not do your driveway. My email is jaycopressurewashnc@gmail.com If you can correct this review I won’t have to take any additional steps to get it corrected. Thank You Jay Raczkowski Owner JayCo Pressure Wash 919-880-5710
5.0

They did great. I was really happy with their service.

Description of Work
They did pressure cleaning.

It went good and they did a good job.

Description of Work
They power washed my house.

Jayco transformed our deck in 2019. It had not been cleaned for years and I had damaged the surface by trying to pressure wash it myself. The deck looked like new after he was done!

Jay does a super job. I’ve used him twice and he is very thorough and a honest and kind contractor. Excellent job! I’ve recommended him to others over the years and would not hesitate to again.

They did an excellent job

At Window Genie, we clean windows and a whole lot more! Window Genie is Southwest Raleigh’s leader in streak free window cleaning, lifetime guaranteed window tinting products, professional pressure washing services, gutter cleaning and gutter protection. Every technician has been background checked and fully trained before entering your home. We are fully insured, licensed and ready to provide you with our industry leading standards in professionalism, customer satisfaction and quality. Call today for a free estimate and put the Genie to work in your home!  …

We clean deck,walls,driveways! We have the experience and dedication to bring your dreams to reality! We guarantee your satisfaction, and we won’t leave until the job is done right. Our team has quality experience in this industry, and we make sure our customers are happy before we leave. Call or click to schedule an estimate today!  …

No License Required for Trade
Insured
All statements concerning insurance, licenses, and bonds are informational only, and are self-reported. Since insurance, licenses and bonds can expire and can be cancelled, homeowners should always check such information for themselves.To find more licensing information for your state, visit our Find Licensing Requirements page.
General Information
Free Estimates
Yes
Eco-Friendly Accreditations
No
Payment Options
Visa, MasterCard, American Express, Discover, Check
Senior Discount
10%