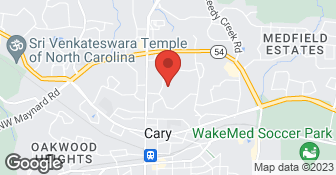 Great! Fast response to request, very professional, excellent work and I would definitely hire them again.

Very well. He was prompt. He was finished in about 1.5 hours, and the work was quality. I'm pleased with the results.

Todd was extremely professional, friendly and prompt. The cable wiring he wasn’t even planning to do. He just happened to be here at the same time as the cable company. When I told him I needed help with the cable wiring he jumped right to it. The install of my TV over the fireplace nook is super solid....and as Todd said....the wall will come down before that frame would ever come down. I am extremely happy with the quality of work. I will absolutely be working with Atkins Wiring for future projects I am planning todo.

Description of Work
Install 55” Flat Screen TV over fireplace. Required building a frame because of large nook over fireplace. Also updated some cable tv wiring upstairs so service could be completed by cable company.

He was good at responding to our questions and arrived on time. He completed everything in a timely manner and he was really friendly. We felt his prices were fair and plan on using his services again.

Description of Work
We had Atkins Wiring come out to hang ceiling fans, mount a new TV, and see what can improve our TV'S reception. He also gave us a quote to come back for security cameras.

Todd dId a great job and was very professional and courteous! I would hire him again in a heart beat!

TV mount went up with no problem. Under cabinet lighting went up ok until I examine upper cabinet (after he left) and found a gorge in the back wall over the microwave. Was not pleased with the clean up. Had to sweep and clean wood floors under the TV mount. I was charged 3% because I paid with a credit card. This is the amount he would have to pay the credit card company. It was made clear that if I paid by check or cash, I won’t have to pay the 3%. I believe this should have been made clear before the work begin so I could decide if I wanted to proceed.

Description of Work
Mount TV and install under cabinet lighting.

very prompt. Cleaned up site very well when complete. will use again

The project was completed in a timely manner and to specification.

Todd was able to resolve the issue for us very efficiently.

Description of Work
Needed to get two cable tv outlets back to box. Past owner cut wires for over the air HD serviced

Description of Work
installed ceiling speakers and connected to stereo

We wanted to mount a TV and we had our own bracket, but it needed assembled. So he kept trying to up-sell his own bracket to use.

Customers bracket was plastic & basically a piece of junk.
5.0

Todd was great. Would definitely recommend. Very speedy and showed up the day after I contacted him. Everything works great.

It looks great and met all are expectations. Very professional and friendly owner. Detailed work and arrived on time. Very satisfied and highly recommend.

Description of Work
TV mounting and rewiring for outlets. We didn't want any wires showing.

Super! Todd Atkins was willing to stop in on short notice as he was in my area. He was very personable, professional and really knowledgeable about what had to be done for the setup. Should I or someone I know ever need home audio work done, Todd will get the call for sure.

Description of Work
I needed help setting up my new sound bar.

Called Atkins Wiring around 1030 asking if they would be interested in mounting my flat screen TV and by 1130 Atkins Wiring was at my door! A++

He didn't do a very good job. First, he made the hole for the wiring without looking to see which side of the tv the wiring was on. Fail. It was on the other side. Next, he put the wall mount together backward. We then had to take the tv down, take the wall mount down, disassemble and then reassemble, then put the tv backup. The final fall is the fact that the tv is not level. For all of this (and a smaller tv) we were charged $450. We chose Todd provider because that's what the Geek Squad wanted, and we thought it was too much. Instead, we relied on Angie's List. Our fall was to not ask him in advance what he planned to charge, thinking that we could rely on his advertised prices.

I'm pretty sure I told you what it was gonna cost before I started. I always do that. I'm also pretty sure the TV was level & the bracket was assembled correctly. I don't think you would've paid me & signed the order stating the job was done correctly if it wasn't!
5.0

We contacted Atkins Wiring and the owner Todd had an opening that week. He arrived on time and was very courteous. He already told us his price, which was very fair. We were pleased with his work and would recommend him to anyone looking to have a home theatre installed. We spoke to him about future work of adding under cabinet lighting in the kitchen when we are ready to remodel.

Called on Monday and he arrived right on schedule the next morning, took the time to understand what we needed, and got the job done. Before he left he took the time to explain exactly what had been accomplished. Very pleased with his services.

Description of Work
Updated the wiring for phones in the leased office for our growing CPA practice in North Raleigh. The office space has a spaghetti maze of wiring from prior tenants over the years and multiple jacks weren't working, plus we need a new jack run in one wall.

Description of Work
Hooked up amplifier and speakers.

The work was done great. My husband feels that we were overcharged and mislead. One of the things we wanted was to have a switch for a ceiling fan and another switch for a light in a bedroom. Atkins Wiring told us in order for this to be done we would have to put holes in the wall to put wires in them. Since then we hired another electrician who installed an additional switch with no problem.

Description of Work
He put in 2 ceiling fans and installed a phone jack.

He took the equipment with him so he could check it out and was to donate it to Habitat for Humanity. Instead, he sold it.When I called and asked why he didn't return it to our home he sent me several ugly emails filled with curse words.

Description of Work
He installed our television on the wall and removed some of the stereo equipment that we no longer needed.

She gave me some OLD stereo equiptment. I never said I was donating it! I didn't sell it either, I gave it to a friend.
5.0

The Atkins tech was knowledgeable and helpful with the installation.

Description of Work
Installed and connected a TV mount.

His price was reasonable but they did not charge me anything. He is very personable and nice. He did a good job wiring the fans.

Description of Work
We used him to wire ceiling fans. He came and did a follow up. This time he consulted on replacing the outdoor lights.

Atkins did a fine job and was easy to work with.

Description of Work
I wanted to drop my cable service, keep my TWC internet service and connect and antenna. Atkins rewired my TV/internet co-ax to remove cable box and connect an attic mounted antenna to my 3 TVs all per my specification.

It was my first Angie's List purchase and I didn't read the fine print thoroughly. It would have been an additional $175 to complete the service.

Description of Work
Called back promptly and I would have scheduled, until learning the service I bought only covered hanging the TV.

We are small business. We have been servicing the Triangle for many years. We offer reasonable prices, and phenomenal results. We know that details matter. We can help you get the landscape and lawn you've always dreamed of!  …

How is ATKINS WIRING overall rated?

ATKINS WIRING is currently rated 4.7 overall out of 5.

What days are ATKINS WIRING open?

No, ATKINS WIRING does not offer eco-friendly accreditations.

No, ATKINS WIRING does not offer a senior discount.

Are warranties offered by ATKINS WIRING?

What services does ATKINS WIRING offer?