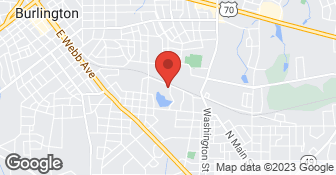 Associated Plumbing Company has been serving Alamance and surrounding counties for nearly 45 years. Associated is a family owned business that prides itself on our knowledge, honesty, integrity and customer service. ...

We are family owned and operated. We take pride in getting the job done right and giving our customers a great experience. Special offers may apply for Angie's List members. Give us a call today, we would love to earn your business!  …

Regardless of the season, your home in the Piedmont Triad should be comfortable to your liking. Just look to Sutton Brothers Repair & Service for all of your comfort needs. We provide heating and cooling services that can maximize your comfort and your peace of mind. Since we were founded in 2000, our mission has revolved around our Piedmont Triad residents. When you work with us, you can be sure that your needs and concerns will be addressed by us. Thanks to our unwavering standards, Sutton Brothers Repair & Service continues to receive great recognition throughout the Piedmont Triad.  …

The work itself was acceptable work (not perfect, but not terrible) but the issue came with the billing. After being quoted $600 by a plumber that was sent to my home to inspect the project prior to the company being hired and the work being performed, the final total that was presented by them was over $1700 and shocking to say the least. I spent nearly two months trying to resolve the issue with the company, calling them and filing complaints to the BBB and other organizations and attempted payments returned by them. We ended in court when they filed against me in small claims and after hearing the evidence and details of the case, the judge threw out their claim and awarded them nothing ... that said it all. BEWARE when dealing with this company and make sure you get a full quote/estimate in writing before they ever start the work ... or better yet, call another plumbing company!!

Description of Work
Associated was hired to do some work in a master bath in conjunction with a remodel.

Bad experience made good by Associated Plumbing. This is not the first time I've needed their help but I hope it's the last. Great work, great crew and great service! Thanks Gene!

Description of Work
I had a sewage backup and overflow. One quick phone call and Associated Plumbing was out to my home, explained what the issue was and how much it would be, then got it done.

repaired waste line connection to sanitary line outside the house

Associated was called to swap out an old dishwasher for a new dishwasher. They arrived in a timely manner but were unable to complete the job - not their fault since the old and new dishwashers were slightly different sizes and there was a plug in behind the space the dishwasher sits in that needed to be moved by an electrician. They did hook up the new dishwasher and had to leave it outside the cabinet which was fine. My issue is with the bill. I was quoted 75 and hour on the phone when I specifically asked their charges and hired them to do the job. With a two hour visit and minimal parts was expecting an approx $150 bill not the $265 that I was presented. When I called their office I was informed that there was now a trip charge etc. VERY DECEPTIVE ... other plumbers can do the same work for a lot less cost. I wouldn't recommend

The total time took 2 hours and it well worth it. Although I could have diagnosed the problem and done the repair my self, it would have taken me longer than a day since I work full time. The convience was worth the $217.50 I paid in labor costs.

Description of Work
Our well pump stopped working. The tech from Associated Plumbing came out at the set time. He checked out pressure tank and switch and ruled them out. He then pulled the pump out and found the problem to be faulty wiring, Her replaced the wiring and a faulty check valve.

They caused water damage and did not fix that right. The sink was improperly fixed to the point that I had to fix it and they then charged me for their faulty labor. I tried to rectify the situation and they were as unprofessional as I have ever experienced. I will NEVER use Associated Plumbing again.

Description of Work
They were supposed to fix two showers and a broken sink. The showers needed to be changed and the sink was leaking. They changed the showers and "fixed " the sink.

Checked rating on Angies List and some coworkers offered good word-of-mouth for this firm. Called company number and was pleased it wasn't some plumber's cellphone but an actual service representative who scheduled me for later that day (wow!). Plumber phoned ahead of time to verify I would be there, and came over. He reviewed the problem, ran for parts and fixed it right up in no time. No hassle, no stress. Can't wait to call them for some additional little quirks I need addressed now that I have found a good plumbing company.

Description of Work
Outdoor faucet inside pipeline had split and needed replacing.

he came in, I gave him the new faucet. he cut off the water. removed old faucet. installed new one, make sure to seal carefully. turned water back on. he cleaned up his mess and discared my old faucet. He was quite cordial, and answered all my questions.

Description of Work
I bought a new kitchen faucet & he simply installed it. I think it took less than an hour. He exprienced no problems with existing blumbing. Simple cut & dry job. I was quoted $79 dollars for the job, it cost me $108. This is the 2nd time I use them & would USE THEM AGAIN!!!

I placed the call around 09:30 AM for service. The tech didn't arrive until 04:30 PM. I waited around the house all day. The work took 30 minutes to complete. I was charged $103.00 for labor and $22.46 for parts. Add tax and the total was $143.46 for 30 minutes worth of work. Perhapse it is industry standard, but that seems a little high to me. Overall, the tech was nice and polite. He seemed to be an honest individual. I'm willing to give them a second try if needed.

Description of Work
Pressure relief valve on a 40 gallon electric water heater was bad and was replaced.

very friendly from time we called to time the job was completed. promtly scheduled the service visit and took care of these tasks. they are always careful with not tracking mud or dirt through the house. we have used them for larger jobs in the past and we have found them to be great for replacing water heaters and delaing with water lines.