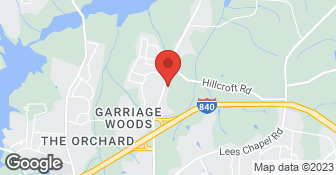 We have over 15 years of experience and our employees are responsible and honest. our business has competitive prices, quality and labor warranty....

With over 8 years of professional epoxy flooring coating experience, we are here to address all your concrete refinishing needs such as garage, patios, basement flooring, along with your business and commercial flooring needs too  …

They do not do plaster repair. this needs to be corrected in Angie's list

It went great!! Enrique was able to do the work only days after giving the quote and the place looks fantastic!!

Description of Work
I had my trim, door and baseboards painted.

Never heard from this company. Not able to rate their work

Description of Work
Painting a roof

Enrique & Monica are good to their word!! I hired Enrique's to paint the exterior of my house in October 2017. They did a good job! I paid for the entire job as quoted and Enrique agreed to come back to paint the kitchen addition that still needed to be re-sided. Well that re-siding took TWO YEARS and Enrique was true to his word and is coming out to paint it! I can't imagine there are many contractors out there who'd do work two years after they were paid! I also had Enrique's paint a metal awning at another house over a year ago. My sis just checked it out again and it still looks fabulous! I'll be calling Enrique's for more work in the future. He and Monica are GOOD PEOPLE and I like supporting small businesses!!

I was very pleased that I found Enrique Painting as I needed to touch up some walls and change some colors before putting my house on the market. Monica (the wife) is very professional on the phone when setting up an appointment and also very thorough for the walk through. I highly recommend them.

I highly recommend Enrique’s Painting! His entire crew was punctual, professional, and did a fantastic job! He went above and beyond to get us the best price for the higher quality paint and his overall price was reasonable.

I had this work done quite awhile ago and never said anything because I didn't want the poor guy to lose his job, but the work that was done was really bad. I was changing the walls from a baby blue (from the previous owner) to a gray tone. I now have gray dollops of paint on my bathroom floors (which I'll have to take a razor blade to to see if they'll come out), and even a couple of spots on my cream colored carpet. Nothing was ever taped off, so none of the line are very sharp on the baseboards, there's specklings of gray paint on the white baseboard, several areas that didn't get full coverage, and some sections/corners that look like my 3 year old did them. There were supposed to be two guys on the job, but one never showed, so it was up to this poor guy to get it all done (which he didn't and I had to pay for him to come back for an additional 4 or 5 hours, I can't remember)..... So, I imagine that the guy was rushed and stressed, and it showed in his work. Not to mention, he showed up late both days. I should have brought all this to the owner's attention when the work was done, but again, I didn't want the poor guy to lose his job. Overall, you live and you learn and I got burned on this particular deal. I'd imagine that the owner is more meticulous than the guys he hires, at least I'd hope so, but I'll never know.

Good morning, I was looking in my files, and I found that you bought a deal per hours. You bought 16 hours, and you wanted to paint the Master bedroom, bathroom, and living room. One worker work 8 hours per day that is why he went two days. If he was late, he was working late. When you buy a deal per hours, you have to manage the work. Because you are paying per hours per person. You didn’t call us, and explain the situation . I am sorry for the bad experience that you had with the worker.
4.0

There were a few spots missed and a fresh gouge in the wall.

I have used Enrique’s Painting for numerous jobs across two different properties over the past three years. They are affordable and have always impressed me with the quality of their work. Please consider them for your next painting project. You will not be disappointed.