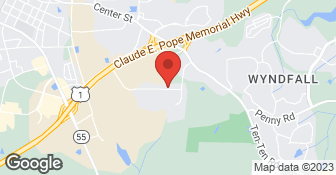 Joe was courteous, professional and kind to my dog! He arrived promptly and performed with skill and perseverance (there was a block in the way and he handled the unexpected issue easily). I will be contacting them to do more work soon.

We came home to find that our water heater and heat pump had stopped working. I had traced it to an outlet that wasn't providing power, after checking to ensure that the circuit breaker hadn't tripped I realized I'd reached the end of my knowledge when it comes to household electrical. I hopped on Angie's List and searched for local electricians that provided emergency service. I ordered by number of positive reviews and started calling. 4 companies didn't answer their emergency service line. 1 company picked up the phone and immediately hung up. Another company wanted $125 to just show up and wouldn't tell me how much they're hourly labor cost was because "It varies by job" and yet another company wanted $240 for the first hour and $175 each additional hour. Finally I got down to Powerhouse. Mr Carrieri answered promptly, heard what the issue was and immediately said "It sounds like a problem with one of your GFI circuits." He asked if I was up for checking some stuff out because he didn't want to come out just to push a button and have to charge me (awesome). So he spent a few minutes on the phone with me, we checked all the GFI outlets in the house (or so I thought) and still had no luck. He said he'd be right out. Once he arrived I showed him the troublesome outlet and let him get to work. He still thought it had something to do with the GFI circuit, so he began tracing the lines, after about 45 minutes of tracing and testing he found the issue... a GFI outlet. It was one we have never paid attention to because it'd had a night light, that covered the entire outlet, plugged into it for years. He reset it and it immediately popped again, without getting up he asked if we had anything plugged in outside. Turned out the Christmas lights we'd been too lazy to take down were causing the outlet to pop because of the bad weather and the plug had come partial out of the socket (thanks GFI circuit for doing what you're supposed to do and keeping my house from burning down). So... in short, Mr. Carrieri did what he didn't want to do and pushed a button and everything was fixed. My wife and I did not care in the slightest. It was worth having heat and hot water in the house again, and we'd never have thought to look at that plug. All and all we were more than thrilled with the service that was provided and Powerhouse Electric will now be our first call when we need electrical work done around the house. I'm glad that those other companies were over priced or didn't pick up their phones. Thanks for the great service Powerhouse.

Description of Work
Troubleshot and fixed an issue with one of our GFI circuits.

Hello, I always try to walk customers through a GFI reset issue before I send out a truck. I always feel bad charging someone to push a button. In your case it was more of a hunt to find the button before we could push it. Thanks for the business and the kind report.
5.0

The guys were prompt, professional and wonderful to work with. The work was done quickly and effectively. I felt very confident that the work was done right. When we took down the old light fixture, we discovered a real electrical mess in the wall. We called Mike at Powerhouse and even though they were booked solid, they managed to get a guy to the house the next day! Amazing. I will never call anyone else for our electrical needs.

[member name removed] Thanks for the great review.
5.0

Scott was very punctual and personable. He worked efficiently and knowledgeably around a less than ideal situation, and we are very pleased with the result.

Description of Work
He removed a large florescent fixture in our kitchen and replaced it with a pendant fixture.

There were two different technicians: both were on time, cleaned up after the installation, and very friendly.

I used Powerhouse Electric on a project in December 2011 and was very pleased with the experience, so I contacted them again to install a motion sensor light to my house's exterior. The initial contact, via Angie's List email, was very efficient and I received a prompt reply from the owner that he would be able to perform my electrical work on the date and time I requested (about two weeks later). On the day of the scheduled service, I had to call the company because the installers had not arrived by the scheduled time, and left a voice mail. About 5 minutes later, I received a phone call from the installer who said he was on the way, but needed to stop somewhere else first to pick up some sort of needed equipment. The installers arrived approximately 45 minutes after the scheduled appointment. However, once they arrived, they were very efficient with the installation, which took approximately 2 hours.

Description of Work
Install a motion sensor light to the exterior of our house.

Pleasant, on time, readily diagnosed and repaired the problem. Competent.

Description of Work
Repaired a potentially dangerous electrical problem in an outdoor receptical.

Very professional; I would use them again.

Description of Work
They installed the electrical hook up for our water heater.

Did a great job, Very professional and reasonably priced.

Three guys couldn't finish the tasks in one day and they promptly came a few days later when one additional part came in that was needed to make the aesthetics just right. They made sure they had the right tools for the job including a large sturdy ladder. I will certainly allow them to provide me a quote on any future electrical work.

Description of Work
Our house is relatively new and needed a few electrical upgrades. A ceiling fan was installed 18' high, recessed lighting in that same ceiling, additional electrical receptacles, an outdoor light that needed to be tied into an existing three-way switch, and multiple other small jobs that required some finessing to make just perfect.

How is POWERHOUSE ELECTRIC OF NC INC overall rated?

POWERHOUSE ELECTRIC OF NC INC is currently rated 4.9 overall out of 5.

What days are POWERHOUSE ELECTRIC OF NC INC open?

What payment options does POWERHOUSE ELECTRIC OF NC INC provide

Does POWERHOUSE ELECTRIC OF NC INC offer a senior discount?

No, POWERHOUSE ELECTRIC OF NC INC does not offer a senior discount.

Are warranties offered by POWERHOUSE ELECTRIC OF NC INC?

No, POWERHOUSE ELECTRIC OF NC INC does not offer warranties.

What services does POWERHOUSE ELECTRIC OF NC INC offer?