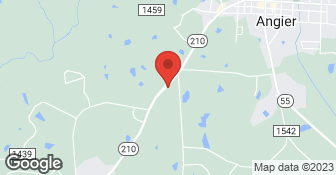 On Tops Roofing has been installing quality roofs in and around the Triangle area for over twenty-eight years. We are a local, family owned and operated company, committed to operating with the highest level of integrity and providing our customers with the best possible experience. We also offer gutter, siding and window services....

Clear Choice Windows is a LOCALLY OWNED AND OPERATED business that is proud to have been serving communities in and around Raleigh, NC for over 20 years. It's no accident that we have won Angie's List Super Service Award SEVEN YEARS IN A ROW! Our owner, Bob Maceda, stays involved in every window project from start to finish ensuring that our dedicated professionals provide excellent craftsmanship, stay safe, and leave you with a smile on your face. Give us a call today. We would love to earn your business!  …

Quality work. Great service. Fair price. They came when promised. Did a good job. Finished on schedule. Good follow-up on minor warranty items. Glad I went with On Tops.

We appreciate the confidence and trust you placed in On Tops Roofing when you chose us to replace your roof. We thank you now for your continued confidence in recommending On Tops to others!
5.0

Why I have selected ON TOPS ROOFING to do the complete replacement of my 7,150 square feet roof: I look around and asked for several estimates from large to small companies, and I have selected ON TOPS ROOFING because: 1) I wanted “designer” shingles which are thicker and more difficult to install than “architectural” shingles, and I wanted the best workmanship warranty. ON TOPS roofing has done a lot of “designer” shingle roofs and is a GAF Master Elite contractor since a long time with a very large volume of installed GAF shingles. And because they are Master Elite, the GAF manufacturer can offer warranty on their workmanship job for 25 years (GOLDEN PLEDGE Warranty). 2) ON TOPS roofing is a “NC GENERAL CONTRACTOR”. This is a guaranty for good business and professionalism. Nevertheless, I received several estimates from other roofers not being “NC GENERAL CONTRACTOR”, 3) ON TOPS ROOFING was very well positioned for Price /work quality: My roof was a complex project with 63 roof facets, 23 valleys and a lot of flashings. ON TOPS Roofing was offering the same work quality (Hand nailing shingles. Open metal valleys….) than the largest more expensive company. Why I recommend ON TOPS ROOFING for professional roofing or re-roofing work: 1) The work went as contracted and scheduled with no surprises or misunderstanding. Brian, the project manager was on site most of the time, and always left messages when he had to leave to take more material or for other reasons, and always answered his phone, even after hours. He was always receptive to my remarks or demands, and everything has been done exactly the way I wanted. 2) At some point one flashing was not looking right for me, the day after they sent their flashing and metal forming expert to redo the job. 3) The team was very organized and professional. Now, after the work done I can really say that ON TOPS ROOFING offers an outstanding PRICE / WORK QUALITY ratio.

Description of Work
Re-roofing of a large roof with designer shingles.

Thank you for your detailed review and for providing On Tops Roofing the opportunity to work with you on this project -- which as you mentioned was a complex one. The job looks great and we are thankful to hear that you are satisfied and had such a positive experience!
5.0

Very professional, great communication and a job well done. From start to finish, they were great to work with and offered a competitive price on our new metal roof. Highly recommend.

We, at On Tops Roofing, thank you first and foremost for providing us the opportunity to install your new and beautiful metal roof! And secondly, thank you for taking the time to provide your feedback - we are most appreciative.
5.0

They were super, they were great. They are willing to work with me. Everything that I needed, they are very efficient, professional and I was very happy with their performance.

Description of Work
They replace the roof on my house, the shingle and the tin roof on my porche.

Thank you for choosing On Tops Roofing. We greatly appreciate your business and your feedback!
5.0

Ronald came out quickly, gave us a reasonable quote and completed the work quickly with a great and professional team. The work was top notch and Ronald handled all our questions, changes and any concerns in a timely manner and with grace.

Description of Work
We needed siding for our new home

Great work, did the job in one day. Excellent clean-up

Thank you for taking the time to provide your feedback. We appreciate your business very much!
5.0

I was very impressed from start to finish with On Tops and Chris. Chris set a time to meet to give us an estimate and arranged to visit house prior to appointment to measure an ***** roof and sky lights. We received several estimates but choose On Tops based on the way Chris presented himself (On Tops was not the cheapest or the most expensive but competitive). The roof was replaced in one day, On Tops had a large crew that worked very hard. Chris gave us the name of the on site supv. and we worked with him during the installation. The day after the roof replacement Chris returned to inspect the roof and the clean up. The roof replacement did not impact our neighbors and the clean up returned yard and area around house to original condition. Would definitely recommend On Tops.

Thank you for your feedback and recommendation! We appreciate your business Mr. [Member Name Removed]!
5.0

They were fast, efficient and did a great job. We were not 100% pleased with a couple of things and they came right back out and fixed to our 100% satisfaction.

Initially, I was impressed with On-Tops. They were my 4th quote, and only because they were recommended from a client. Let me just go on record any say that I am not a person who is hard to please. Being an HVAC contractor, I always give people the benefit of the doubt, but I feel like I have been scammed. The salesperson was prompt, and professional. He initially came in at one of the highest prices I received, but quickly dropped his price when I mentioned I had other quotes. I am not going to complain about this..who wouldn't want a lower price? but most people would like it up front. My biggest issue is the "solution to my problems" that I paid an extra $800 for. My biggest complaint about the home are the amount of leaves that we have in the neighborhood. This was high priority when meeting with roofers, because they all "install gutters". I was sold these guards because they would be "maintenance-free" and "they are designed to only need a 3-5mph wind to blow the leafs off". Well, this is not the case. My skepticism began when I got home later in the day and the guys were installing the pieces of metal with holes in it on my gutters (no one called to let me know a time or that it was even confirmed). The one guy in the crew knew absolutely nothing, nothing about the product, he almost seemed scared to talk to me, but the other guy did most of the talking. Once seeing the product, I instantly started questioning how this was going to keep my gutters clean. Installer than tells me that they will need to be blown off several times a season.....wait what? Against my better judgement, I didn't say anything, I figured I would trust the sales guy and thought to myself, well they install these all the time, right? People must be happy. I bit my tongue because I was overall happy with the roof and service up to this point. After the install, I was told a magnet sweep was performed. We found 10-15 nails in the first day, most of which in the driveway and on the back porch (we have dogs, so this was very frustrating). I think a lot of this could have been prevented if tarps or something would have been laid down on the deck. We still have nails stuck between the boards. I find a couple nails every week (2 more this morning)...and granted...I'm not even looking for them. (This is after two sweeps of the house and yard). This morning, I looked into my gutters and noticed they are already collecting plenty of tree debris, acorns, etc. it's MAY and these haven't even been in a month and they already need cleaning?!?!This afternoon, I happened across my customer with a lot of old gutter guards in his garage...turns out that knows all about these "gutter guard" scams. The only thing they do is clog and rot the wood behind them. So basically I am left in the exact position I was in before these "MAGICAL" gutter guards were installed. This is the worst purchase I have ever made. It is rare that I ever review a company or a product (typically only if I am extremely happy)...but I feel the need to spread the word about this scam. I hope we can resolve this issue with On Tops, because if it weren't for this $800 lie, I would be happy with my roof.

Description of Work
We had a new roof installed, along with "gutter guards". Beware of the scam.

We were not made aware of Mr. [Member Name Removed]' concerns with his gutter guard product until we read his review. On Tops Roofing is a company that prides itself in working with our customers to not only meet their needs but to ensure complete customer satisfaction. We are also a company that adheres to a certain level of moral and ethical principles and certainly do not take the word "scam" associated with our name lightly. The gutter guard product we install is manufactured by a long-standing, exterior building product leader. It has been thoroughly tested by the manufacturer, and based on research by our company, including comparison to similar products, the product we install far exceeds the competition. We have installed four to five thousand linear feet annually of said product over the past many years and have never received any complaints such as Mr. [Member Name Removed]'. I would like to state that the gutter guard product in question was installed on April 12, 2017, and Mr. [Member Name Removed]' review was made less than a month later (May 2017). Being that the months of April and May in North Carolina do not produce a lot of tree debris, we do not believe sufficient time was given to evaluate the product and make such a claim. Regardless, we are happy to remove the product and refund the total paid for the gutter guard product