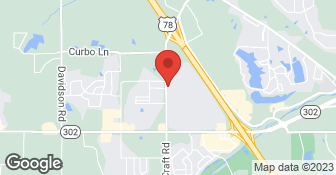 I have been in the construction and real estate business over 15 years. I have 6 full time employees and others that are very reliable that I use on a regular biases. Every job large and small are appreciated and handled with the same care and pride. I over see every job personally. If it is a construction repair or remodeling job give us me a call. In most cases we will be able to handle the job to your satisfaction. I am not happy until you are happy. Member of BBB with an A+ ratin

Description of Work
Very professional and accommodating. They are about half way through the project.

Owner was prompt coming to view our projects and promised a quote within a few days. But 26 days later (and 5 emails later) we still did not have a quote on even one of our projects.. He said he was extremely busy and we did not want to wait any longer so we continued to search for another contractor. If he was so busy that he couldn't even work up some quotes for us, we had doubts about a time frame to actually get the work done. He was professional in his first visit and seemed like a very nice man, but we were not happy having to wait for almost a month to just get a quote. We found another contractor on Angie's list and the quotes were prompt and work was scheduled within 5 days.

Description of Work
We never received a quote.

Wanted the jobs done as a suprise for wife who was out of town. Discussed on Thursday, did the job Fri, Sat, Sun to get done before she got back Monday.

I knew this installation would not be easy since the old vent fan vented into a space in the attic that was not accessible from the attic itself, but I think even Mr. Carter underestimated how much of a pain putting this thing in would be. When Mr. Carter originally quoted me, he also was able to advise me which Broan model would be the most quiet. I ordered it off Amazon and it arrived two days later. The $180 was for installation of the timer and his labor--it does NOT include the cost of the actual fan too. My fan was installed on 7/31/13 and the first part of the install took him from about 11 in the morning until 5 in the afternoon. Getting the old vent fan casing out was difficult and putting the new casing in was also difficult since he had to and quot;pushand quot; the new casing in from downstairs versus going into the attic and being able to push it in place downward. A larger hole did have to be cut in order to accomplish this, and because of that, Mr. Carter had to come back a few weeks later and patch up where the hole was cut. Once the fan was in place, Mr. Carter installed a nice electronic timer that can be set for 5, 15, 30 or 60 minutes and cuts off automatically. Considering the price I paid for this work, I think it was likely TWICE that much of a headache for Mr. Carter than what I was charged. It was not an easy job, and Mr. Carter never made me pay a dime to him until the ENTIRE job was finished, including the patching up of where the hole had to be cut. While it was sometimes hard to stay in touch with him, if he said he was going to be there on a particular day at a particular time, he did follow through. It's hard to find a contractor who will do what they say when they say they will do it, so I must give a big thumbs up for Mr. Carter's honesty and integrity.

Description of Work
Mr. Carter came and changed out my old and noisy vent fan in the master bath (4" vent) to a Broan Ultrasilent QTXE080 model with a 6" vent and also installed a nice timer for the fan that cuts off at predetermined time intervals.

They did quite an excellent job. They cleaned up the house after they did the job. The price was fair.

Description of Work
Home Repair Co insulated my garage and built some shelves for me in October.

We take great pride in our experience, expertise, quality, and customer service that we provide to meet the consumers needs. It is our mission to provide excellent workmanship and complete customer satisfaction from start to completion of a project. In order to understand the needs and expectations of our customers, we take great care to work and communicate with every customer in a professional manner. Our reputation is based on service, safety, and quality, regardless of how large or small the job.  …

American ProClean is in business for residential and commercial customers. We are specialist in high pressure and low pressure cleaning. Our hot or cold water machines can be used to make walkway, driveways, pool decks and parking ares look as good as new. Our low pressure washing is safe for houses, decks and fencing. With our proprietary chemicals they not only kill mold and mildew but will prevent it from coming back so quickly. With our 20 yrs of experience, we guarantee all of work to your satisfaction.  …

We Offer the best in Roof Cleaning, Pressure and Soft Washing, Exterior home cleaning, and Gutter cleaning and Guard Installing. We are Licensed and Insured.  …

Bonded
Insured
All statements concerning insurance, licenses, and bonds are informational only, and are self-reported. Since insurance, licenses and bonds can expire and can be cancelled, homeowners should always check such information for themselves.To find more licensing information for your state, visit our Find Licensing Requirements page.
General Information
Free Estimates
No
Eco-Friendly Accreditations
No
Payment Options
Check, PayPal
Senior Discount
No
Emergency Service
Yes
Warranties
Yes

We do all kinds of residential and commercial repairs and remodeling. Property preservation is one of our specialties. If you need it done we will be glad to take a look and in most case will be able to handle the job to your satisfaction.

Home Repair Co is currently rated 4.7 overall out of 5.

No, Home Repair Co does not offer free project estimates.

No, Home Repair Co does not offer eco-friendly accreditations.

No, Home Repair Co does not offer a senior discount.

Home Repair Co offers the following services: We do all kinds of residential and commercial repairs and remodeling. Property preservation is one of our specialties. If you need it done we will be glad to take a look and in most case will be able to handle the job to your satisfaction.