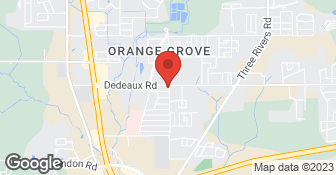 Poor service. The technician broke the fire place bulb and still charged for cleaning fire place. Despite numerous attempts management has refused to replace light and rudely wants us to repay for problems caused by them.

Fast and friendly. They even put in a temp flashing on one side until they came out to do the actual job as it was completely missing.

Description of Work
Flashing needed replaced all around

Description of Work
Sweep the chimney

Description of Work
Cleaned and inspected chimney, replaced chimney cap and flashing. Matt was very professional. He built the flashing from scratch since we have an odd sized chimney.

Description of Work
They worked with us and made it easy to pay how we could. Were on time, professional, helpful, etc. We used them to clean the chimney and are already planning to use them to reface our ugly fireplace.

The young man, Matt was right on time. 9:00 Appointment. He arrived at 8:59 AM! He was very friendly and cordial. Serious about his business and was very thorough. Total package was done properly. Price for the one full hour of labor was fair. Highly recommend.

Description of Work
Did a great chimney sweep, cleaning and safety check on our chimney.

Description of Work
Never returned my calls. It has been two weeks since I left my last message. Only ever get the answering machine.

Description of Work
Very good service. Examined the secondary fireplace and determined it did not need cleaning. Very happy with the service.

After a huge storm had damaged our chimney cap on our house, I contacted the Top Hat Fireplace Store and they sent a representative the same day. The two gentlemen that came to our home were very professional and removed the old cap and gave me an option of either replacing it or repairing the old one if they could. When I said just replace it, they said that they would see if they could repair the old one and give me a quote on both. They also put a temporary cover on it until they were able to get a new one for my home. When they came back two working days later due to the weekend they notified us of the repair. They did not require any payment at the time of service and stated that they would send the bill in the mail later. I would defiantly use their services again in the future.

When I called the first time (one month ago) the man said that it would be "next week" before they could get to me. I never heard back. I called again, and the man said he would check to find out what happened. He never called back. I called again within the last couple of days. The woman I spoke with said that they were all backed up due to people quitting, people getting sick, etc, and she had no idea when they could help me and suggested i seek service elsewhere. She was unable to tell me when they might be able to service my fireplace. She agreed to check and see if she could give me an estimate as to when they could come out. She said she would, but still I have heard nothing back. I've given up on them and will see if I can find an independent service technician who can help me.

Description of Work
Since they are an authorized dealer for our type of gas fireplace, I called and requested a service call due to some problems with the fireplace.

I WAS IN NEED OF HAVING MY FIREPLACE CHIMNEY CLEANED PRIOR TO THE UPCOMING WINTER WEATHER. I CALLED TOP HAT FIREPLACE STORE TO SEE WHAT SERVICES THEY PROVIDED AND AT WHAT COST. AN APPOINTMENT WAS SET UP THAT FIT MY SCHEDULE. THE TECHNICIAN ARRIVED AT THE SCHEDULED TIME AND PROVIDED THE REQUESTED CLEANING. HE WAS VERY COURTEOUS AND PROFESSIONAL. THE WORK WAS PERFORMED IN A TIMELY MANNER AND HE MADE CAREFUL PROVISIONS TO MAKE THE WORK AS CLEAN AND TIDY AS POSSIBLE. HE DID A VISUAL INSPECTION OF THE INSIDE OF THE FIREPLACE AS WELL AS GOING ON THE ROOF TO INSPECT THE CHIMNEY. I WAS TOTALLY SATISFIED WITH TOP HAT FOR PROVIDING PROFESSIONAL SERVICE AND AT A REASONABLE PRICE.

Professional Chimney Sweep Services, Servicing a large portion of the beautiful Gulf Coast. We currently perform services from Panama City, FL to Bay St. Louis, MS. Providing the greatest in home customer service the chimney industry has ever seen was the reason why ARC Chimney Sweeps was founded. We not only have a grueling interview process and hire only the best candidates, but we believe that our technicians go above and beyond all expectations. We believe in the philosophy that it's easier to train a nice person to be good at chimney’s than a person that’s good at chimneys to be nice. We exude customer service, and it shows in our performance and ratings. Making you satisfied or happy isn't our only goal, having you excited about using us annually is! Customer satisfaction guarantee on all work. Our technicians have some of the best training in the area. Our quality of work will not be matched. We never cut corners and use only the best products when dealing with your chimney, furthermore, unlike most other companies we invite you to ask us questions. We want you to feel comfortable putting a fire inside your beautiful home. Having a fireplace is one of the most rewarding things about owning your own home, and having confidence in its safety is paramount.  …