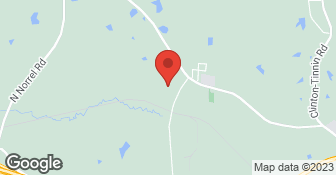 Our business uses the slogan, "Ask your friends about us." Since 1979, when Partridge Door Company began, we have always tried to serve each and every customer as promptly as possible, so that they can readily recommend our services to their friends. Our employees are highly skilled technicians who take pride in their work. Our prices are kept as low as possible to make them affordable to all of our customers. We strive to make every customer happy, and address any concerns that they may have....

Talked to James @ 2:00 Monday and explained rollers were off track. He informed me that it would be Thursday before he could send some one. I told him I couldn’t wait that long, He offered to give me names of people who might be able to come sooner. I then called some one that came out @ 4:00 that day and they repaired door. On Tuesday I again called James about reimbursement, he said he could not reimburse me because he didn’t do the work. How do you expect some one to go 3-4 days with an inoperable garage door.

We strive to make every customer happy and I offered a repair company that we would have been able to get out there within 24 hours due to us being backed up. This customer chose to use a different company that we did not recommend. After being charged more than the typical service fee, the homeowner wanted us to reimburse him for the call. We would have been more than happy to do so if he had used a preferred service provider.
5.0

I can't speak highly enough about Partridge Door Company. I decided to try them based on their AngiesList reviews and I was not disappointed at all. They showed up on time and were fast and professional. I could tell that they actually take pride in their work and were not rude and in a rush like most of the big name companies. I will absolutely use Partridge Door Company again for all of my garage door needs.

Mr. [Member Name Removed], Thank you for choosing us for your garage door needs. I am very honored that you feel that way about our company. We strive to make sure every customer is happy and get a fair price. If you ever need anything in the future, please do not hesitate to contact us. James Taylor
5.0

Owner and employees are always professional and competent. Best door company in Jackson!

The repairman explained it could be repaired and did a great job completing the job quickly. I was very impressed with the service and would recommend them to anyone.

Description of Work
My garage door was broken and I thought it might need to be replaced.

Very pleased with the work. Everyone I dealt with from the initial phone call to the technician who came out and did the work was top notch. They called to let us know when they would be there and were on time. Price was very good for the work done.

Description of Work
Garage door torsion springs broke and needed to be replaced.

Fantastic! Competitive pricing, nice people, very professional and they understood that I needed to get my old car into the garage to protect it from sub freezing temperatures! I had not heard of this company until contacting Angies' List.

Description of Work
My garage door spring decided to break right when we were having some of the worst winter ever this year! I called several other companies and they said it would be three-five days because I could get mine serviced. Partridge Door sent a nice young fellow over-drove though freezing rain to get here and had it up and running within the hour!

Beautifully. Reset took only minutes, but Keith Partridge, owner, took time to tell me about what he was doing and how to set the car programmable buttons for other cars.

I sent a message to them on Angie's List late one afternoon, and they responded first thing the next morning with a quote. 24 hours later, the serviceman was at my house. He completed the job within 30 minutes. The serviceman did a great job. Before he left our house, he went above and beyond to make sure the garage door was working exactly as it should.

Description of Work
Replaced springs, serviced and oiled the garage door and opener, reset the opener position, replaced garage door opener wall panel, and reinstalled the backup battery that I had removed so that I didn't accidentally

All of his workers were tied up, so James came out himself and did the repair, so I wouldn't have to wait. He arrived exactly when he said he would, and, refreshingly, on the front end of the time estimate, rather than the back end. He explained exactly what he was doing and why. His explanation of why I will need a new garage door was reasonable, but he told me not to think about it until mine needs another repair and quoted me a price that was about 20% of what I thought it would cost. I see why the company gets such good reviews, and I will definitely call them for the next repair and to replace the door, when it comes time.

Description of Work
Replaced a hinge on the garage door that had torn loose; re-lubricated hinges; checked balance and sensors.

Call us at 601-937-7958 for the quickest response. We are a complete residential garage door sale, and service company with over 20 years of experience. Specializing in spring repair, and replacement. Same day service on all repairs. Serving BRANDON, PEARL MADISON, RIDGELAND, RICHLAND, FLOWOOD AND MANY MORE SURRONDING AREAS!!! CALL THE REST THEN CALL THE BEST!!! SATURDAY AND SUNDAY SERVICE AVAILABLE BY APPT.  …

Bonded
Insured
All statements concerning insurance, licenses, and bonds are informational only, and are self-reported. Since insurance, licenses and bonds can expire and can be cancelled, homeowners should always check such information for themselves.To find more licensing information for your state, visit our Find Licensing Requirements page.
General Information
Free Estimates
Ask for Details
Eco-Friendly Accreditations
No
Payment Options
Check
Senior Discount
No
Warranties
Yes

We DO NOT sell nor service entry doors, sliding patio doors, passage doors within a home, commercial glass entry doors and their openers.

PARTRIDGE DOOR CO is currently rated 4.9 overall out of 5.

No, PARTRIDGE DOOR CO does not offer eco-friendly accreditations.

No, PARTRIDGE DOOR CO does not offer a senior discount.

PARTRIDGE DOOR CO offers the following services: We sell and service garage doors and garage door openers. We are dealers for Genie, GeniePro, Wayne-Dalton and Clopay. Our primary area of operations is the Jackson metro area, including Hinds, Rankin and Madison counties. Other areas can be served with a reasonable trip charge. We service all major brands of garage doors and garage door openers and maintain a stock of parts for several manufacturers. We mostly serve residential customers, but we do provide a few commercial services.

Are there any services PARTRIDGE DOOR CO does not offer?

We DO NOT sell nor service entry doors, sliding patio doors, passage doors within a home, commercial glass entry doors and their openers.