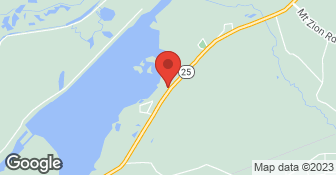 It worked fine for about 2 years and then started having problems with it blowing fuse relays. Each year they had to replace a relay. Finally after the labor warranty went out they figured out it was the inside blower fan locking up and causing the fan relay to burn up. I still had a parts warranty so the fan motor didn't cost me anything. All I had to pay was labor. They were usually there to repair it the next day but I wish they would have found the problem before the warranty went out. I guess they couldn't help it because the fan motor was cooling off before they got there and it would start back working after the new relay was replaced. All in all they provided pretty good service. James

Description of Work
I had a new Package unit installed outside.

Approximately one year later I cannot get them to answer the phone. I used them because they were the ones that installed the A/C when the house was built. There advise was that we were trying to keep the house to cool and over working the ac unit. I did not believe this but my wife and followed there advise and would not set the thermostat below 73 degrees during the day despite how hot it got out side and would only turn it lower during the night, and like I said here we are a year later facing the same problem. I do not know if it is just the product that they carry is junk or that they installed a unit to small for this house. Whatever the problem I am not happy with them.

Description of Work
Replaced a part on the outside unit. Cannot remember exactly what they replaced.