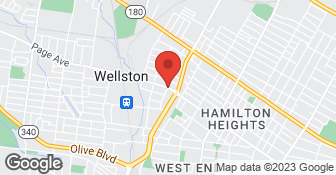 We are the fourth generation of a family owned business, open since 1908. We are a Hunter Douglas Gallery Dealer, which means we get the best pricing, specials, and products, and pass that advantage on to you. We have earned the Angie's List Super Service award for the last 4 years (since we started our profile) Our installation team are certified Hunter Douglas Installers. We have a beautiful showroom with full sized samples and/or we will come to you for a free in-home consultation (within a 20 mile radius of our store)....

Description of Work
Batteries replaced for shades in great room.

We are so pleased that you were happy with our service. We look forward to working with you next project!
5.0

we had ancient roman shades in the sun room; Mr Segal came and helped us pick the new shades. Delivered and installed in less than three weeks. Looks beautiful!

We are so glad you are happy with your new shades! Thank you for your positive review. We greatly appreciate it!
5.0

Victor Shade did a beautiful job on our solar shade project! They are experienced professionals with a warm, personal touch that gave us exactly what we wanted. And on top of it all—they are dependable, communicative, and easy to get along with. We desired a simple, modern shade solution for a sliding door window on the third floor of our condo—for a room that is drenched in afternoon sun. We wanted to kill the heat, but still let some light in. I met with Scott Segall, the owner/designer/manager, at their shop and we went over options and samples. We decided on a commercial screen roller shade with 3% openness. Scott recommended commercial over residential because of our taste for simplicity, disinterest in the options supplied by residential, and the fact we could save significantly without sacrificing any quality. A win-win! Scott explained that we could do the install ourselves, but for Victor to do the install (which included measuring) would only cost 10% more. It seemed more than worth it to us. Scott set up a measuring appointment and clearly explained the schedule from manufacture to install. The shades were made to order and currently, because of Covid, Scott explained, it could take from 4 to 6 weeks from the time the shades were ordered for them to appear at their shop. Then, an install appointment would be scheduled which would finish up the job roughly a week later. Although we were disappointed at how much time things might take, we so much appreciated Scott’s transparency and his refusal to promise something he could not guarantee. The shade ending up arriving on the early side of Scott’s estimate and, as promised, it was installed around a week later. Not over yet. . . here’s the best part. . . There was a hiccup with the install that Victor Shade went the extra mile to solve for us. We were missing endcaps for the brackets we had been promised—that would cover them and give them a more finished look. This is the kind of thing, that depending on the company, can never get solved. Nope! Scott responded immediately to our concerns and remembered we had discussed this issue. He investigated with the manufacturer and found out that the only solution was to use another kind of roller cover that would allow the proper endcap covers. With no fuss, the manufacturer (and Scott) created these at no extra cost to ourselves—and reinstalled. Wow!! A textbook example of top-drawer customer service. We are so grateful and love our shade!

Thank you for your review. So glad you are happy with your new shades and with our company. We look forward to working with you on your next project!
5.0

Description of Work
Perfect. Great home visit for choices, prices and colors. Everyone was polite, professional, efficient and knowledgeable. Excellent customer service, guarantees and perfect installation. I’m so pleased with everything I bought. They gave me great advice and really worked with my budget

Thank you so much for your support of Victor Shade Company. We are so happy that we could work with you on your project and that you love your window treatments!
5.0

Excellent solution provided by Scott. Installation was on time and perfect.

We hired Victor Shade to replace a 10 year-old large shade in a bedroom. The service we received from Victor Shade was outstanding. The owner, Scott, helped us choose the best shade, including color, for the room. Installation was timely and professional, and the shade looks fabulous. Recently, we had trouble with the slide device used to raise and lower the blind, and when I contacted Victor Shade for repair, it was fixed within days. We will definitely use Victor Shade again in the future!

Do not hire Victor Shade Company (10100 Page Ave., St. Louis, MO 63132) to purchase window treatments or for repairs. They have the poorest customer service I have ever encountered. Six weeks ago, I hired them to fix a broken shade (bottom up/top down). I have called them on 3 separate dates to find out the status. The first time, I was told they were looking for a part. The second time (last week) the serviceman told me the part couldn't be found and he would try a different solution. He said he'd have it fixed by this week. It's Friday (5/17/19), and I have not heard from Victor Shade. So, this morning I called for the third time to see get the status. I talked to the manager and he told me it couldn't be fixed. Okay. I get it. The shade can't be fixed. BUT, THEY NEVER ONCE CALLED ME TO TELL ME ANY OF THIS. I HAD TO CALL THEM. If I hadn't called them, I wonder if I would have ever heard from them. THIS IS NOT OKAY. I'm not complaining that the shade can't be fixed. I AM complaining because no one ever called me to inform me of this problem. I had to call them. The person I talked to today who is in charge was rude and condescending. He flippantly said "I'm sorry." Well, "I'm sorry" doesn't work. Be honest. Tell the truth. Get back to your customer. That's all I ask. So, now, I've waited 6 weeks to get this problem solved and I'm at square one. If they would have come forth upfront and told me the truth, I could have ordered a new one and had it hung by now. You've lost my business Victor Shade. I've been a customer for 40 years but NO MORE!

Description of Work
Repair a shade

We are disappointed with the above review. Although the customer states that she has used us for 40 years, this shade was not purchased from Victor Shade Company, but was a product purchased at Home Depot Expo in February of 2008, and they are no longer in business. We tried to help this customer to fix the product. We pride ourselves on quality customer service (and have received numerous Super Service Awards) and are sorry this customer feels she received something less than that. When this shade was brought to our shop the customer was informed that the parts could not be gotten to make the repair. However we would attempt to find parts at a number of different suppliers. A second conversation was had informing her that we still could not get parts and we would attempt to fix the shade by fabricating parts at our own shop. Unfortunately this effort did not work either. When I was contacted yesterday (before we could contact her) I had to share this news, but before I could offer a discount on a replacement shade I was yelled at and hung up on. We once again are sorry that this customer feels dissatisfied with our service however after 2 conversation and a lot of effort to get a shade fixed that was purchased at a now defunct company there is nothing more we could have done.
5.0

Called around, Sunshine indicated that they would send the shade out and it would take 10 days. Went to Victor Shade Co and the repair was performed in 10 minutes for a very reasonable charge. Awesome and quick experience.

Although this is not generally the case, I am glad that we were able to repair your shades while you waited. Thank you for the positive review, and please contact us if we can help in the future.
5.0

It was excellent in all aspects of job. The windows were measured in a professional manner, I was given assistance in choosing suitable blinds within my budget , workman arrived on time and installed blinds without a hitch. The areas were left clean and tidy after they finished. Very pleasant and professional

The salesman and the installer were very nice and professional. We were very pleased.

Description of Work
We have purchased blinds from them multiple times, each time for a different room. The blinds are wonderful and the price was great.

An Angi 5-Star Rated company and BBB Torch Award recipient! Window Depot of St. Louis (formerly known as XteriorPRO) is a replacement window and door company that specializes in highly efficient triple pane windows at comparable prices to middle of the road double pane windows. Window Depot of St. Louis' window and door offerings typically qualify for the EnergyStar Most Efficient designation which saves our customers $$$ on energy bills, helps make their homes more comfortable and even reduces exterior noise. We also offer the Evelyn's Leaf Solution Pro gutter protection systems to keep you safe and off the ladder, which comes with a 20 Year No-Clog Guarantee. We are truly dedicated to customer service that goes well beyond the point of sale, ask us about our Lifetime Workmanship Warranty! At Window Depot of St. Louis we feel each homeowner we work with has a unique problem that they are trying to solve. This is why we take a no pressure, consultative approach to the sales process. We offer multiple styles, options and design features to assure we can find a solution to your problem that fits your individual needs and budget. If you are in the market for new windows, doors, or gutter guards, please contact us for a free, no-obligation, in-home or virtual consultation today.  …

Lakeside Renovation & Design is the Interior & Exterior remodeling company St. Louis trusts to provide top quality products and first-rate service. (Unfortunately, we do not offer Window Repairs) We are one of the only St. Louis siding contractors to achieve the prestigious James Hardie Siding “Preferred Remodeler” status. Our goal is to help make your home more beautiful, comfortable and energy efficient all while delivering a home remodeling experience that is enjoyable and stress-free. We specialize in full scale remodels and are not outfitted to do repairs unless you are our customer currently.  …

We are committed to our customers, providing exceptional products at an unbeatable price with service at the top of the list. Our products are EPA Lead-Safe certified and our windows are Energy Star certified and are backed by the Good Housekeeping Seal. Additional DBAs - Window World of St Louis & Window World Inc. Locally owned & operated by Jon Gillette & Jim Lomax.  …

Victor Shade Company is currently rated 4.9 overall out of 5.

No, Victor Shade Company does not offer a senior discount.

Are there any services Victor Shade Company does not offer?